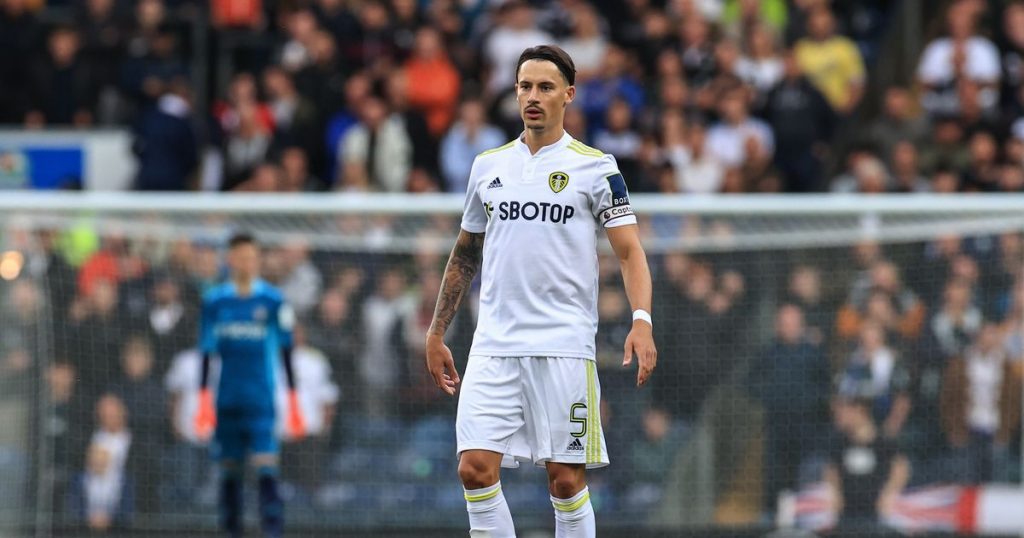 Leeds United head into this weekend’s game with Everton needing to rectify the errors on display in last Saturday’s defeat to arch-rivals Manchester United.

Marcelo Bielsa watched as his team were picked apart in attack, midfield and crucially in defence, as Paul Pogba, Mason Greenwood and Bruno Fernandes ran riot in the Leeds half.

Kalvin Phillips was a repeated target for BT Sport’s ultra-zoom lens as he sat on the Old Trafford bench, restricted to a watching brief.

Bielsa had deemed the England international not quite at the requisite level to go up against international teammates Harry Maguire and Luke Shaw – both of whom played the full 90 minutes in red.

The Argentine admitted two days prior to Leeds’ latest Old Trafford defeat, that Phillips had undergone roughly half the pre-season regime his teammates had been subjected to.

Therefore, it came as less of a surprise when Robin Koch was named in the starting XI on Saturday morning.

This coming weekend though, Leeds fans are likely to be disheartened if Koch is once again named in defensive midfield ahead of Phillips.

While Saturday’s was merely a fitness decision, an additional week of first-team training should ensure Phillips is up to speed to face Rafa Benitez’s Everton.

There are doubts though, given Marcelo Bielsa’s post-match comments where he came to the defence of Robin Koch, who had been accused of losing Bruno Fernandes on more than one occasion which led to a Manchester United goal.

“I liked how he [Koch] played,” Bielsa said. “I thought he was a dynamic player, he was present. He was willing and committed and made lots of [defensive] efforts.”

This may be cause for concern for some supporters, but in reality if Phillips is passed fit, he will return to the fold this weekend.

Bielsa has never been a head coach to castigate his players publicly in the immediate aftermath of poor performances.

Koch’s display was a disappointing one; Bielsa will be the first to recognise and rectify that.

The 66-year-old’s true intention may well be to start Phillips against Everton, even though his defence of Koch suggests otherwise.

The benefits of coming to Koch’s defence are three-fold.

By doing so, he shrouds his team selection in mystery, saves Koch from a public humiliation and eases any pressure on Phillips to rush back before he is fully fit.

The England international’s omission from last night’s under-23 fixture between Leeds and Crystal Palace was further evidence that Phillips genuinely is very close to a first-team return.

In the past, when Bielsa has been unsure of a senior player’s match fitness, they have been trialled in an under-23 game, much in the way a fit-again Adam Forshaw has become an auxiliary member of the Mark Jackson’s squad.

Everton at Elland Road already feels like a must-win fixture for a number of reasons; namely to help supporters forget about last weekend’s result.

It will also be the first time Leeds have had a full house at Elland Road for nigh-on 18 months, and the expectation will be for the team to put on a show against evenly-matched opposition.

Kalvin Phillips in the starting XI will go a long way to generating that famous atmosphere long before kick-off.

Discover how Leeds United’s U23 side got on last night with our player ratings from their trip to Crystal Palace.