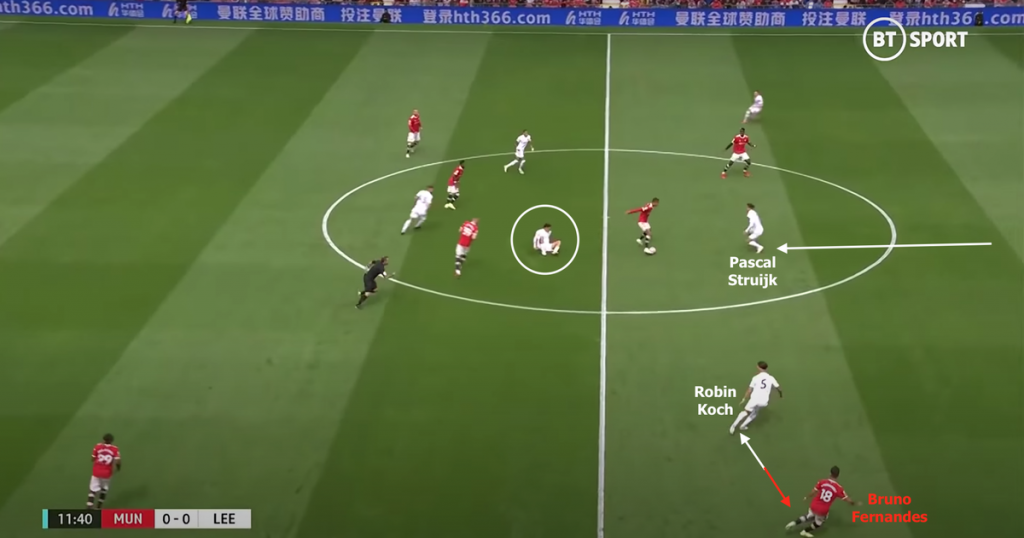 Leeds United’s 5-1 defeat to Manchester United was a disappointing and deflating display, evoking a flurry of reactionary transfer takes on social media.

Marcelo Bielsa’s main gripe at full-time was Leeds’ inability to turn over possession in dangerous areas – an important aspect of Leeds’ play, and a valid concern.

Between them, Raphinha, Jack Harrison and Patrick Bamford made nine ball recoveries during the 90 minutes, with late substitute Helder Costa making one further recovery.

That was as many as Luke Ayling and Robin Koch achieved alone.

Leeds certainly tried to apply themselves but were found wanting, bypassed by the hosts’ slick passing and ability to evade the visitors’ pressure.

The introduction of Junior Firpo at half-time in place of Rodrigo meant Stuart Dallas shuffled into a No. 8 role alongside Klich, but it yielded little.

Leeds’ midfield pairing of Klich and Rodrigo also started at Old Trafford last December, a game in which the Whites looked uncharacteristically overrun. So, was it too much of a surprise to see Manchester United carve out a number of opportunities early on, originating from the chasm of space in front of Robin Koch and the central defenders?

Probably not, but the reason why is not simply answered by the fact it was the same midfield pairing, as explained below.

Coupled with the fact Koch was dragged from pillar to post man-marking an elusive and slippery Bruno Fernandes, Leeds’ inability to turnover possession in Man United’s half allowed for plenty of space in between the Whites’ midfield and defensive lines for the likes of Pogba to exploit.

In stark contrast, Leeds’ creative midfielders – or rather those tasked with creating any semblance of an opportunity for Patrick Bamford – had a decidedly lesser impact on proceedings.

As demonstrated by the below heatmap courtesy of Opta, Leeds failed to get on the ball in or around the penalty area all that often.

But it was not just the midfield to blame for Leeds’ inefficiency at Old Trafford.

The other team, the one that scored five goals, also had something to do with it.

Illan Meslier’s clipped passes into the feet of advanced midfielders or wide players was a particular facet of Leeds’ games last season.

He completed 31 passes yesterday afternoon, but 20 of those were to Pascal Struijk and Liam Cooper.

Meslier found Raphinha on two occasions, Klich twice, Bamford once and – you guessed it – Rodrigo once.

His other five passes were to Luke Ayling and Stuart Dallas, and with Manchester United’s stranglehold, it was unlikely Ayling would have had the opportunity to sit high and wide before advancing play with one of his trademark dribbles.

Last year, the hosts managed to put up 4.18 xG when they scored six past Illan Meslier – so Marcelo Bielsa isn’t exactly wrong when he says there was some improvement on last time.

The quality of Bruno Fernandes’ finishes were particularly impressive, and high quality players will tend to overperform how the ‘Expected’ player would do. That’s the whole point.

In summary, was it the midfield? Yes. But was it also a gulf in class, borne out of an enormous disparity in wealth and spending? Yes.

Paul Pogba was another £90 million.

Back to the drawing board and back to the training pitch; there are 37 games remaining this season and if last year’s Old Trafford visit is anything to go by, none of the 37 fixtures still to be played can be as bad as that.