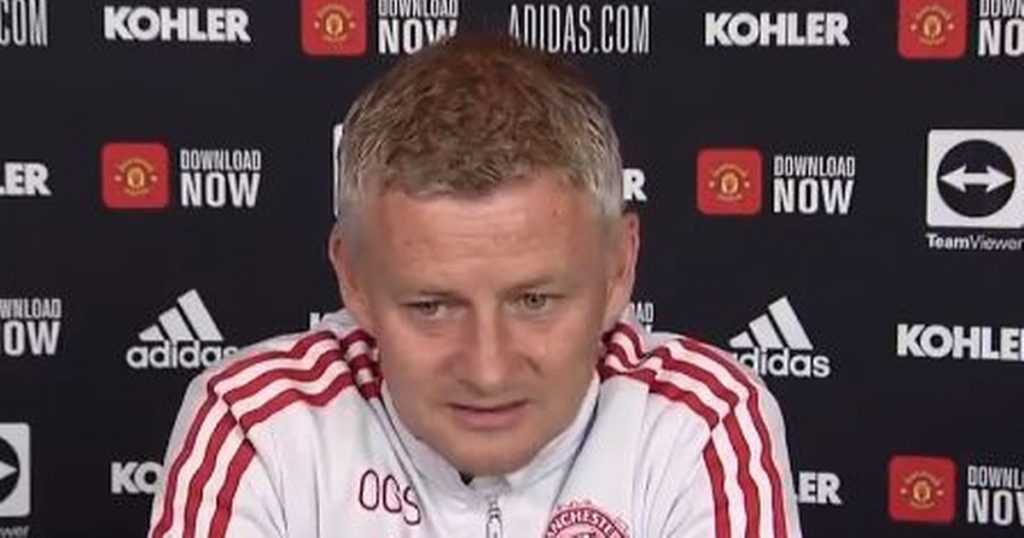 Jadon Sancho is in line to make his Manchester United debut against Leeds United but Ole Gunnar Solskjaer has confirmed Raphael Varane is unavailable.

The Whites head to Old Trafford to start their 2021/22 Premier League campaign against their old enemy.

Marcelo Bielsa has a near full-strength squad to chose from, with only Diego Llorente and Joe Gelhardt out of the match.

Sancho will feature against Leeds despite missing parts of training this week with illness, though the Manchester United boss refused to confirm if he’d be in the starting XI.

“We’ve had a good pre-season, the last couple of weeks have been good with everyone back in,” Solskjaer told the press.

“Even though we are missing a few players through injury and COVID, we feel confident ahead of the game.

Jadon is going to be involved definitely. He has had a good week, unfortunately, he was ill after his holiday.

“We’ve lost out on a few days of training with him but he’s gelled really well in the group. He has looked sharper than expected, he will be involved. Can’t tell you if he is going to start though.”

Varane won’t be involved at Old Trafford either after a delay in the paperwork needed to officially confirm him as a Manchester United player.

“He hasn’t trained with us. All the dots over the eyes and the ts haven’t been crossed yet. Things happen and they can take time,” Solskjaer explained.

“Unfortunately with the isolation, it’s delayed these things. It’s not 100 per cent done yet so I can’t say he will be involved with us tomorrow.

“I can probably say he won’t be because he hasn’t trained with us yet. It always happens, there are little things but the big hold up was the isolation and the quarantining, of course.

“He’s been in Manchester now so it’ll be done soon.”

Solskjaer is without Edinson Cavani, who only returned to England this week, Eric Bailly and younger winger Amad.

Jesse Lingard and Dean Henderson, who both tested positive for COVID-19 last week, are also likely to be absent.

“Edi (Cavani) is in the country,” said Solskjaer. “[But] he’s just finishing off his isolation period. He’s had a little bit of extra time for personal reasons.

“Eric (Bailly) and Amad are also in the country waiting to get the all-clear to join the team again. They’ve had a very exciting summer of course, been in the Olympics [and] played games before that as well, so they should be fit before they come.”