For while there has never been much debate around Fernandes’ value to the Old Trafford cause since his arrival from Sporting Lisbon in January 2020, with Pogba it could not be more different.

Indeed, on Saturday afternoon Graeme Souness’ name was trending on Twitter as a direct result of Pogba’s four-assist performance in reference to the former Liverpool and Scotland star’s long-held reservations about the midfielder.

In creating four of his side’s five goals, Pogba added his name to a list of seven men who have achieved the feat in a single match in the Premier League era, and became the first Manchester United player to do it. Harry Kane’s contributions in a 5-2 win at Southampton in September 2020 marked the only other time it had happened since 2013.

“People talk about the quality of Paul,” said Fernandes, “but his quality is not up for discussion. We know what he can do.

“Paul is an important player for us. We know to expect these kind of performances from him.”

Yet this narrative is not the reality.

It is staggering to think in one game Pogba has eclipsed his assist tally – three – from the whole of last season.

A first-time lofted pass to Fernandes for the opener, a 40-yard curling ball inside Pascal Struijk to set Mason Greenwood free for the second, a short pass to Fernandes for number three and a low cross delivered with his left foot to find Fred in space to complete the rout. The highlights reel for one game would put Pogba high on the list of the world’s most influential players.

The problem is that even reaching close to those levels on a consistent basis has proved impossible for the Frenchman.

That is why there has been so much debate this summer over whether United would be better off cutting their losses on a player who cost them £89m when he returned from Juventus in 2016 but could – for the second time – leave them for nothing, given his contract expires next summer.

As it turns out, Lionel Messi has effectively closed the exit door for now.

Paris St-Germain were the only club with the status, interest and finance to do a deal in the current transfer window. But Messi’s arrival in the French capital means even they cannot contemplate it now, which in turn means Pogba stays where he is.

Negotiations will therefore continue over his future, with the long-accepted options narrowed to two. Either Pogba leaves next summer as a free agent – his controversial agent Mino Raiola employed that tactic with Gianluigi Donnarumma last season before the Italy keeper eventually left AC Milan for PSG – or he signs a lucrative extension and stays with Manchester United. 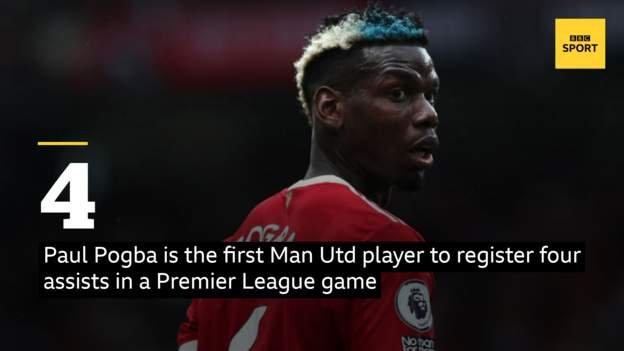 United manager Ole Gunnar Solskjaer is growing tired of discussing the matter and although he was twice asked about it directly in his post-match media conference, his answer quickly veered into a collective assessment of how well his team played.

A couple of sentences could be picked out though.

“Paul has got that vision and quality,” he said. “I am very impressed with his fitness levels as well. He looks ready to go.

“The last 18 months have been strange – the only interaction has been through media and watching the games on TV so to be reunited with the fans is important. This is the real Manchester United. This is how I sold the club to Edinson [Cavani] and said you can’t leave after one season with no fans. In answer to your question ‘yes’.”

The question was whether the return of fans could be the key factor in persuading Pogba to stay.

It cannot be the only one though. Money, inevitably, will be an even bigger one and history suggests there is plenty more debating to be done around the 28-year-old before his future is resolved one way or another.

For now the talk around Pogba is positive. And in the quest to become serious contenders for major honours again, the club’s declared aim per executive vice-chairman Ed Woodward’s programme notes, United fans can only keep their fingers crossed that Souness’ name keeps cropping up on Twitter.