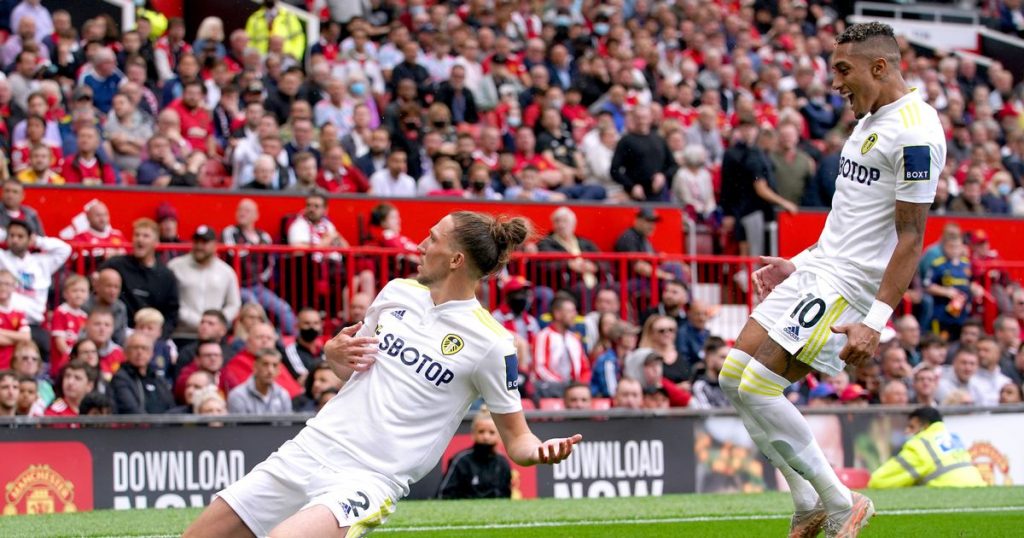 On what conspired to be a very poor day for Leeds United, Luke Ayling’s sensational strike brought one of very few silver linings.

The right-back got the Whites’ only goal in superb fashion as they were beaten 5-1 by Manchester United at Old Trafford.

The goal sent the 3,000 travelling away supporters into pandemonium as it levelled the score, only for those fans to see their team go 3-1 down six minutes later.

BT Sport commentator Darren Fletcher instantly called it an “early contender for goal of the month” as Ayling wheeled away performing his trademark guitar celebration in front of the packed away end.

Co-commentator Lucy Ward was also full of praise for the pick of the six goals in the match, she said: ““What a strike that is from Ayling. There was just a quiet tempo to this second-half and it just allowed Leeds and Ayling to pick the ball up. He’s scored a few like that over the years but nothing like that one. Manchester United will be kicking themselves.”

The goal ultimately didn’t mean much in the grand scheme of the game and if anything, as Jake Humphrey put it, it “poked the bear” as the home side went on to ruthlessly dispatch Marcelo Bielsa’s side.

His former BT Sport colleague, Gary Lineker, took to Twitter to make one of his typically witty comments as did the injured Diego Llorente who couldn’t quite believe what he had seen.

The rocket from 25 yards was Ayling’s 7 th goal for Leeds in all competitions and just his first in the Premier League but it won’t be one that he is celebrating.

In his post-match interview, he admitted that the few minutes after his goal went in were ultimately him and his team-mates’ undoing.

He said: “Some people might say we scored too early in the second-half but a really poor five minutes cost us the game and we shouldn’t do that against a good team like that. They’ve got the players and it was always going to be difficult.”