Judi Love has been announced as the 14th celebrity competing on this year’s series of Strictly Come Dancing.

The Loose Women star’s involvement in the hit dance show was announced during Friday’s edition of the ITV show.

Judi said: “I think I am still in shock that I will be part of this amazing show. I’ve watched it for many years and admired the phenomenal abilities of these dancers and celebrities that have taken part and dedicated themselves to learning a new craft.

“I’m truly looking forward to pushing myself in something that I could have only dreamed of doing and now it’s actually coming true! I can’t lie I’m  soooo nervous but excited at the same time.”

Judi is one of the UK’s most in demand entertainers. A firm favourite on the stand-up circuit, as well as being a regular Loose Women panellist, Judi is also known for producing a host of viral online comedy sketches, amassing a huge following on social media.

Just prior to Judi’s announcement it was revealed that Olympic swimmer Adam Peaty would also be taking part.

The gold medalist’s involvement in the hit dance show was announced during Friday’s Newsbeat on Radio 1. After being announced as the latest star to take to the dance floor, Adam admitted he was “bricking it”. 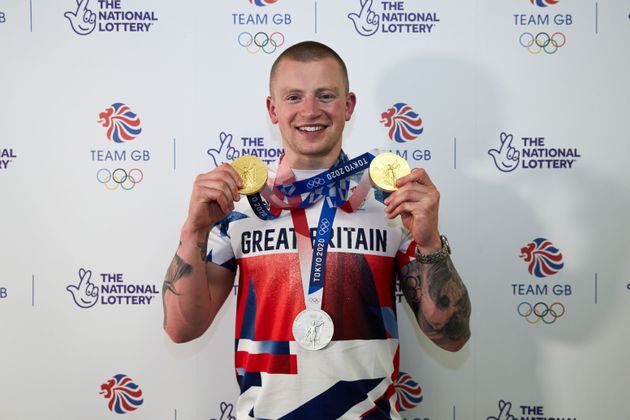 Adam Peaty poses with his medals from the Tokyo 2020 Olympics.

Joining them on the show will be CBBC star Rhys Stephenson and Bake Off favourite John Whaite, who will make Strictly history as one half of the show’s first-ever all-male partnership.

Also competing will be TikTok star and chef Tilly Ramsay, perhaps best known as the daughter of Gordon Ramsay, as well as Greg Wise, whose acting credits include Sense & Sensibility and The Crown.

Finally, two EastEnders stars have also joined this year’s line-up after former cast member Nina Wadia was announced, while Rose Ayling-Ellis who plays Frankie Lewis in the BBC soap, will make history as the first deaf contestant to take part on Strictly.

Strictly Come Dancing will return to our screens in the autumn.