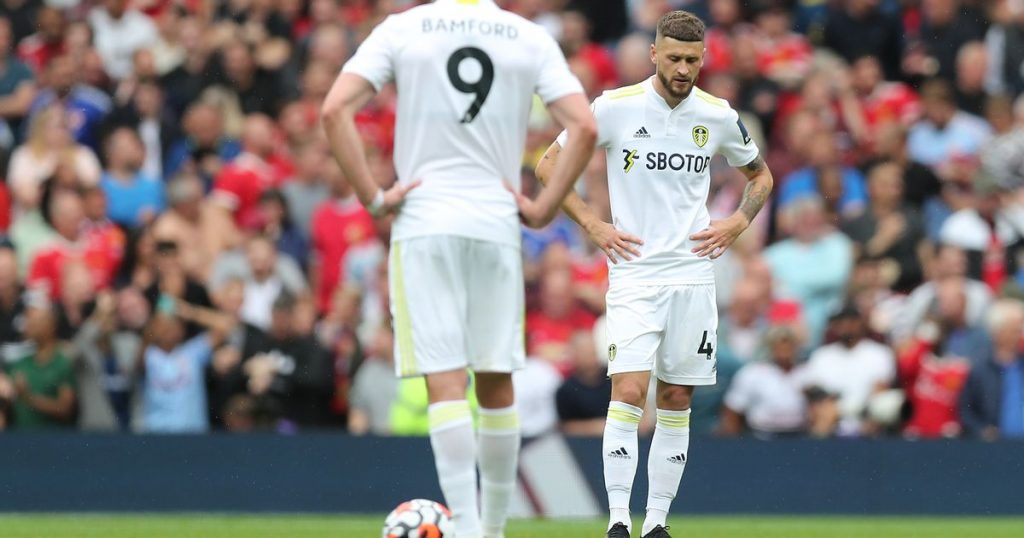 The biggest takeaway from Saturday’s opener was the weight of the scoreline. Yet again, Leeds United returned home from Manchester United off the back of a four-goal deficit.

This had been billed as the opportunity to eradicate a challenging pre-season programme and lay the ghost of last December to rest.

All the team provided was another horror show and a need for a full round of counselling sessions before the next trip to Old Trafford. That’s 11 goals conceded in two matches there.

If there was cause for concern after the summer, the cynics saw all they needed on Saturday lunchtime to really start pushing their narrative further. It was far from pretty at Old Trafford and there were some desperate performances, but you cannot ignore the quality of the opposition.

A team many of us expected to be undercooked and underprepared after a challenging pre-season, looked every inch the title contender with a clinical class of finishing on show.

This result had the hallmarks of last December’s nadir. The quick-fire goals, the deadly finishing, the panic around the Leeds penalty box.

Last December should even provide some comfort. The timing of Saturday’s drubbing perhaps deepens the wound.

With no other evidence of Leeds being an excellent team in 21/22 it’s easy to fear the worst. At least last December there was an enormous body of evidence which showed the Whites would be fine in the top flight.

Yesterday is undoubtedly a low point, but there were a lot of them in 20/21, when the side ultimately finished ninth. Back-to-back victories followed the 6-2 last year.

A midfield cut to ribbons

Mateusz Klich and Rodrigo lined up as the central midfielders in the last visit to Old Trafford. They resumed their roles on Saturday and the result was largely the same.

Eight months ago it was Klich getting the half-time chop and this time it was Rodrigo’s turn, but neither had any fun in either of the games.

Fred and Scott McTominay once again proved too hot to handle, too dynamic, too intelligent, too quick, too strong all over the pitch. They were everywhere and gave the Leeds lads nothing in return.

For Rodrigo, it was another example of the struggles he has when playing as what should be a disciplined central midfielder against the better sides in this division.

There is no doubting the Spain striker’s attacking quality, but in matches like Saturday’s when you have so few opportunities to show it off, you have to be switched on without the ball.

There were numerous occasions when he seemed to be five or 10 yards too far forward, either too isolated for team-mates to find him in building moves or too far away from those home players he needed to challenge when the hosts would turn the ball over.

While Kalvin Phillips (also hooked at the break in December) was the man behind them last time, on this occasion Robin Koch was holding station and it’s hard to recall a more difficult afternoon for him.

The Germany international was tortured by Bruno Fernandes, admittedly one of the world’s finest attacking midfielders. It became far too easy for Paul Pogba and the Portuguese to weave their webs across the pitch.

Bielsa had his reasons for starting Koch and of course the German spent the majority of pre-season playing there, but this was another painful case of missing Phillips, a fundamental cog in Bielsa’s Leeds.

The debate around acquiring another central midfielder and/or natural cover for Phillips will rage on among the fans.

The hosts went in at the break as the better side and rightfully lead 1-0, but it was clear something had to change to get more out of Leeds.

Junior Firpo was one move which needed to happen: tick. And yet Bielsa stopped himself there. At one goal down the match was still there to be won and, with the beauty of hindsight, we are left wondering what might have been had Phillips been introduced.

If anyone in this United squad has proved they can return from an absence and not only play, but play well, it’s Phillips. It felt like the team was crying out for his control, poise, strength, anticipation and distribution at the break, yet Bielsa resisted, even leaving him on the bench for the entirety.

Surely, the England man must return next weekend at Elland Road.

We had the little tastes of the fans returning at the back end of last season, but nothing compares to a capacity crowd, especially when there were more than 70,000 watching on.

The noise was outstanding from the 3,000 fans packed into the south-east corner of the stadium. Result aside, the players ensured the fans knew they were appreciated.

Led by Liam Cooper, the entire group went over and clapped those who had been singing all afternoon, even in the face of a five-goal hiding.

The appetite was sufficiently whetted for next weekend’s capacity crowd at Elland Road.

After 687 days, Adam Forshaw was finally named in a Leeds United matchday squad again. After all of those persistent injury problems, Forshaw finally has some light at the end of the tunnel.

There have been positive steps across the summer with the friendlies he has played in and the training he has completed, but it remains a long road back for him before Bielsa will consider playing him you feel.

Being back among the travelling party and being a part of the warm-ups in the stadiums with his friends will surely go some way to giving Forshaw hope he can return to that stage.

Just being included without necessarily playing will still help with the long-term process he is working through.