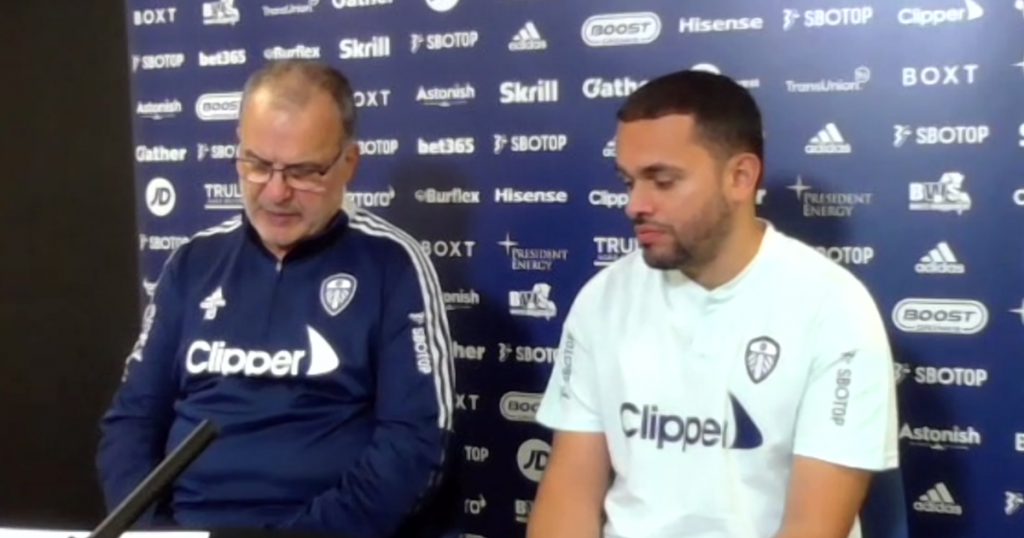 Leeds United boss Marcelo Bielsa may well have spent the week in a darkened room, poring over the mistakes which led to the Whites’ 5-1 opening day defeat to Manchester United.

Bielsa stated prior to the fixture that playing the club’s arch-rivals held no more significance than any other match, but to the Argentine losing by such a margin will have been particularly cutting, regardless of the opponent.

The Toffees arrive with three points already on the board, having come from behind at Goodison Park to defeat Southampton in Rafael Benitez’s first game in charge of the Merseyside club.

Tensions remain high amongst Evertonians, with many still not sold on the prospect of a famous ex-Liverpool manager taking the reins.

Regarding issues closer to home, Bielsa provided updates on the fitness of two key players who missed out last Saturday.

Kalvin Phillips was restricted to a watching brief from the substitutes’ bench, while Diego Llorente missed out altogether at Old Trafford.

The 66-year-old reiterated that Llorente would need additional time to return to full fitness, but that Phillips was at a sufficient level to play a good portion of Saturday’s game.

“Another week of work means he is physically better and he is closer to being in the team,” Bielsa said of Phillips.

“It’s probable that he will have chances to compete again next week,” he added, in discussing central defender Llorente, suggesting Everton may come too soon for the Spaniard.

This will come as a relief to many Leeds supporters who questioned the decision to leave out an almost fully-fit Phillips at Old Trafford.

The experiment involving Robin Koch in the No. 6 role had teething problems during pre-season but was largely fine until the opening day when Bruno Fernandes, Paul Pogba and Mason Greenwood’s collective movement tore the Leeds blueprint apart.

“Games like the one we lost on Saturday, it generates a hurt that is not easily cured and we don’t forget.

“[The manager] is only good if the process to avoid what hurts a team is effective so that’s why I explained to the players that I feel absolutely responsible of the situations that happened in the game against Manchester United.”

Bielsa launched into a lengthy explanation as to how he believed he failed to prepare the team for the challenge last weekend.

Looking ahead to the Whites’ next fixture, Everton visit Elland Road on Saturday, prepared for a 3pm kick-off in front of a capacity home stadium for the first time in March 2020.