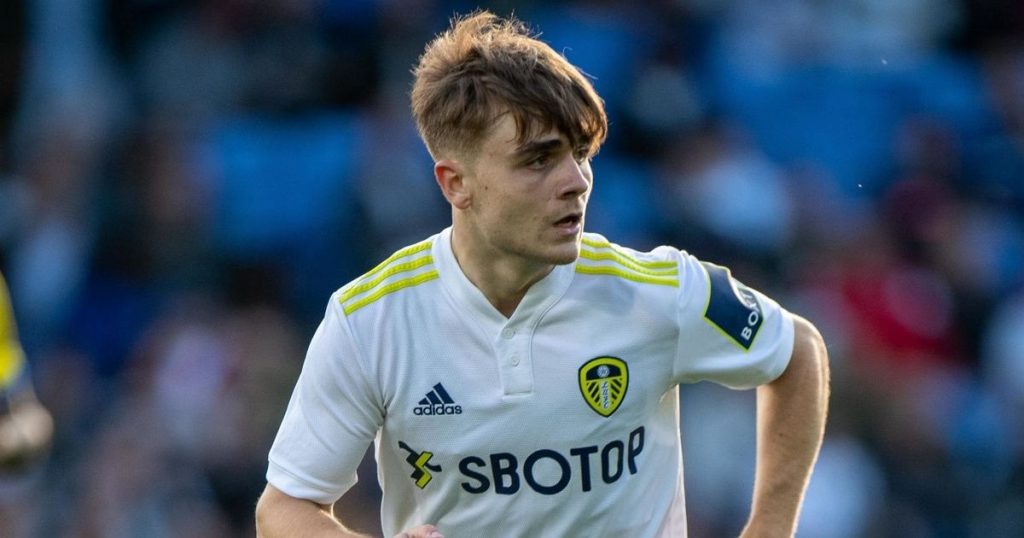 Leeds United’s under-23 side were tasked with defeating a well-versed Tottenham Hotspur boasting an elite finisher, in order to record back-to-back wins in PL2 Division 1 this afternoon.

Dilan Markanday’s first-half hat-trick gave Leeds a considerable problem despite dominating the contest in terms of possession and chances created.

Mark Jackson named a strong team ahead of tomorrow evening’s League Cup tie with Crewe Alexandra, in what was a gritty but entertaining fixture.

It was something of a harsh lesson for the Leeds youngsters who gave Markanday three sights of goal, each of which he converted; the final score at Thorp Arch reading Leeds United 2-4 Tottenham Hotspur.

Goals from Joe Gelhardt and Sam Greenwood [pen] reduced the arrears for Leeds, but Spurs’ potency in front of goal was just too much.

Still getting to grips with the Leeds way of playing, hence his involvement with the under-23s. A good talker and communicator from the back, and his short-range distribution had improved since last week. Nothing silly, but could have done better with at least two of the Spurs goals.

The Norwegian was rounded for Markanday’s third, coming off a tad overzealous.

Self-assured and solid from right-back, Drameh engaged in fewer of those trademark bursts forward with the ball in his care, but his defensive fundamentals remained good.

Difficult to commend the defence having conceded three goals in the opening 45 minutes, but Cresswell was solid in the air and in his challenges. Positioning could do with some work, getting caught a little high at times but to his and his teammates’ credit, there weren’t an awful lot of chances the visitors managed to fashion, despite the scoreline.

Communicated well in the second half when Cresswell had been substituted but the Moore-Kenneh partnership is one which still needs developing.

Kenneh was alert to balls played into Spurs’ strikers feet, and managed to keep Markanday quiet in the second half, unlike the first.

Growing into the demands of the left-back role with each week, McCarron was positive with the ball, driving forward and supporting Amari Miller but did allow Spurs in down his side on a few occasions.

Not quite at the same level as his outing at Crystal Palace, but this was a more frenetic game altogether. Provided a good foil for Lewis Bate and Sam Greenwood who pressed high.

A very promising display from Bate in the No. 8 position. He was everywhere and has seemingly ensured he is already at the level required to play a high-octane midfield role in this under-23 team.

Distribution was on display for all to see, and that cultured left foot definitely impressed, even when knocking it through gaps in the Spurs defence to access a wide player in the penalty area. A better performance than perhaps could be expected in game number two for the summer signing.

Commanding first half in which he converted from the spot, which was followed up by a quieter second 45 from Greenwood. His assist for Joe Gelhardt’s goal was his crowning achievement today, surging from midfield, latching onto Bate’s through ball and clipping it across for his good friend to finish. An expert penalty kick is simply par for the course from him now.

As is always the case with the 19-year-old, he did not shirk responsibility when it came to tracking back or supporting attacks. Great engine.

Gritty and determined wing-play from the ex-Wigan man today. Only on the pitch for 45 minutes but made an impact down the right-hand side, linking up well with the likes of Bate, Greenwood and Gelhardt.

A good understanding with his teammates is encouraging.

Won Leeds’ penalty which drew the two sides level at that point in the game. Beat his man on occasion but not with the same frequency or regularity as Summerville’s first 15 minutes. Promising display and a good 80 minutes in the legs.

A little hesitant in front of goal on a few occasions, but this could have read very differently had he converted more than one of his opportunities. Kept getting in goalscoring positions which is exactly what’s needed, and that work-rate of his was excellent as per.

Engaged in a physical battle throughout his 45 minutes on the pitch, but Moore was up to the task. Seemed confident in possession too, whenever he had time to breathe.

Came on at the break with a bang, beating numerous players with his fresh legs. Faded as the second half went on.