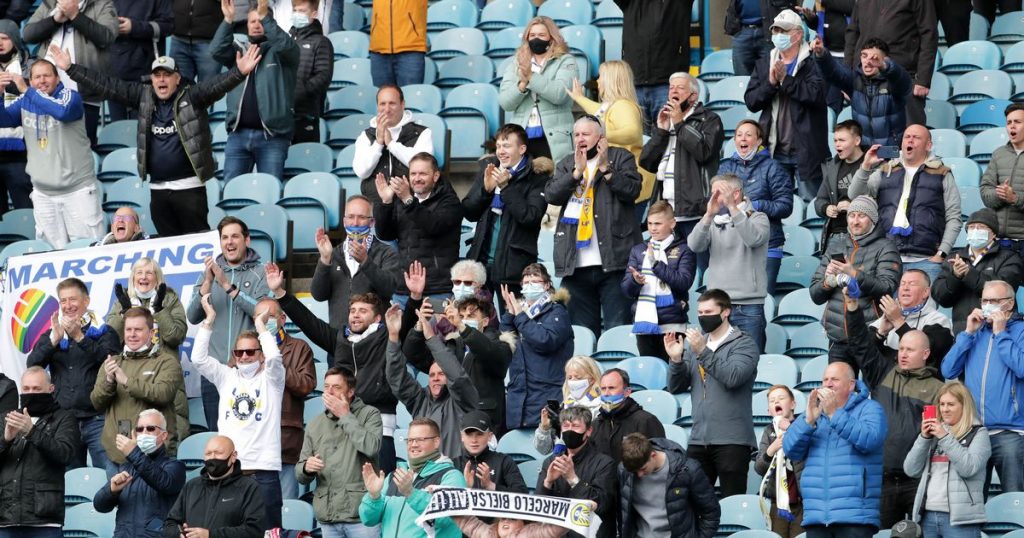 Leeds United fans have been starved of live football for the best part of 18 months, just as supporters of clubs all around the country have suffered.

While the overwhelming majority are yet to make a return to Elland Road, fans shared their relief at being back at a football stadium tonight, even if it was that of a National League North side.

The main attraction at Guiseley’s Nethermoor Park this evening was Leeds United’s U23s – the junior arm of the Premier League club that took the division by storm last year with their buccaneering, fearless approach.

While Leeds fans watched the team put in the hard work to reach that stage over the course of the 2018/19 and 2019/20 seasons, they were restricted to just one match during 2020/21 which they could physically spectate.

8,000 lucky supporters were permitted entry to Elland Road for the final day win over West Bromwich Albion, a game which bid farewell to Gaetano Berardi and Pablo Hernandez.

Due to coronavirus restrictions in the United Kingdom at that time, Leeds fans were socially distanced but now with the lifting of all measures, a bumper away following could once again follow Marcelo Bielsa’s – or Mark Jackson’s – team on the road.

A late afternoon downpour, subsequent traffic and delayed kick-off couldn’t dampen the spirits of the travelling contingent, though.

Leeds started brightly, converting from the spot through Dutch winger Crysencio Summerville who had weaved his way into a position to be fouled.

Minutes later, Guiseley equalised but on the stroke of half-time, Sam Greenwood rifled in a trademark free-kick from just outside the penalty area.

Granted, it was the 19-year-old’s fourth attempt of the evening, but he could chalk those first three down to just finding his range.

Marcelo Bielsa was in attendance, tucked away next to the Leeds dug-out in which Mark Jackson sat, leading his U23 outfit against National League North opposition Guiseley.

All in all, it was to be a successful first run-out for Leeds United, even if just the single senior player featured.

Adam Forshaw was brought on for the final thirty minutes, seeing out the game in defensive midfield.

However, there was some concern with Joe Gelhardt and Liam McCarron picking up knocks. The pair are highly unlikely to feature tomorrow night versus Blackburn – but gave a good account of themselves in the 50-or-so minutes they did play.

Amari Miller made an unofficial debut off the left following his move from Birmingham City, while on the opposite flank, Crysencio Summerville was predictably a livewire.

Charlie Allen tapped in a third for Leeds in the closing stages before Lewis Hey fought back for the hosts but found his efforts to be in vain.

The final score at Nethermoor Park was Guiseley 2-3 Leeds United.

Up next for the Whites is a trip to Ewood Park, before pre-season tests versus Fleetwood Town, Real Betis and AFC Ajax.