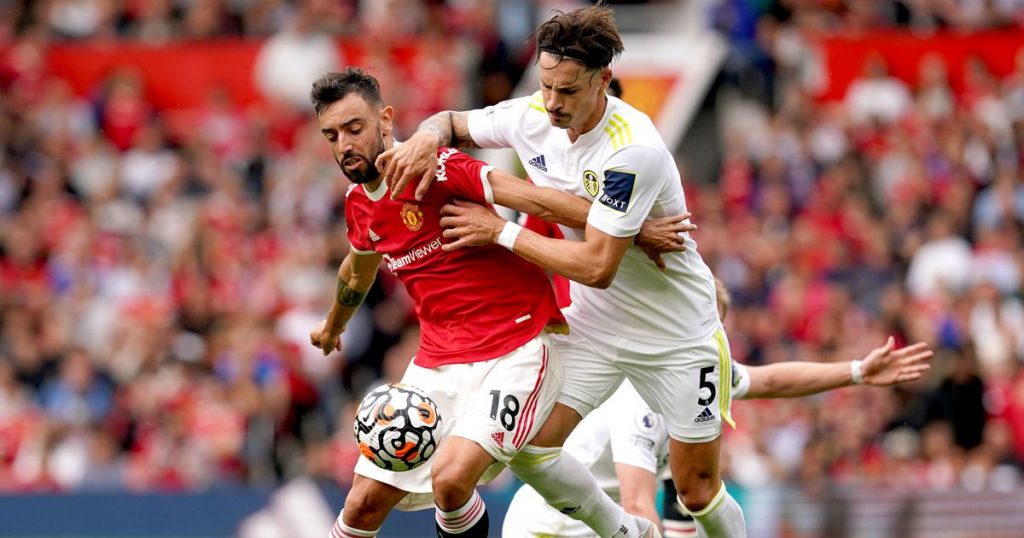 Never going to be a mighty fine day when you’ve shipped five. Meslier may need counselling ahead of his next visit to Old Trafford after 11 goals conceded in two trips. Should not take the blame for all of the strikes, but should have done better on a few of them. 4

A shame his spectacular goal will be forgotten as a footnote in the history of this fixture. Had his struggles, like they all did. Paul Pogba effectively ran the game from that inside left berth. Never a force going forward aside from his goal. 6

A very tough afternoon for the centre-back. Caught out with balls in behind for the first and second goals. Looked jittery and nervous in the first half. Opposition players always seemed to have that half a yard on him. 3

Struggled dealing with Mason Greenwood’s speed. Tried to instil some organisation in the defence, but the hosts were too good on the day. 4

Barely gave anything Daniel James’s way in the first half, but followed the trend of central midfielders struggling at Old Trafford in white after the break. 5

A very challenging afternoon for the Germany international, who was tortured by Bruno Fernandes for the full duration of the match. Never looked comfortable in the role. 3

Unable to get in the game and have any kind of impact on proceedings. Isolated and a very frustrated figure by the end. 5

Followed a very similar pattern to that seen last December. Struggled in the middle to keep the shackles on either Scott McTominay or Fred. When he did cut loose in possession he was unable to create anything of note, save for one shot at David de Gea. 4

Had next to no impact on the game with or without the ball. Really struggled with picking up the right men when the hosts had the ball. Hooked at the break. 4

Covered Aaron Wan-Bissaka well in the main, but struggled to have any impact going in the other direction. 5

Did what he could whenever the ball came near him, not that it did much at all. A thankless task in attack. 5

3 Junior Firpo (on for Rodrigo h/t)

Not the circumstances around a debut he would have wanted. Coped okay with Daniel James, but never got the chance to get into the game going forward. 5

Not enough time to make an impact in a match long lost by the time he came on.

Added nothing in trying circumstances from the bench. 5