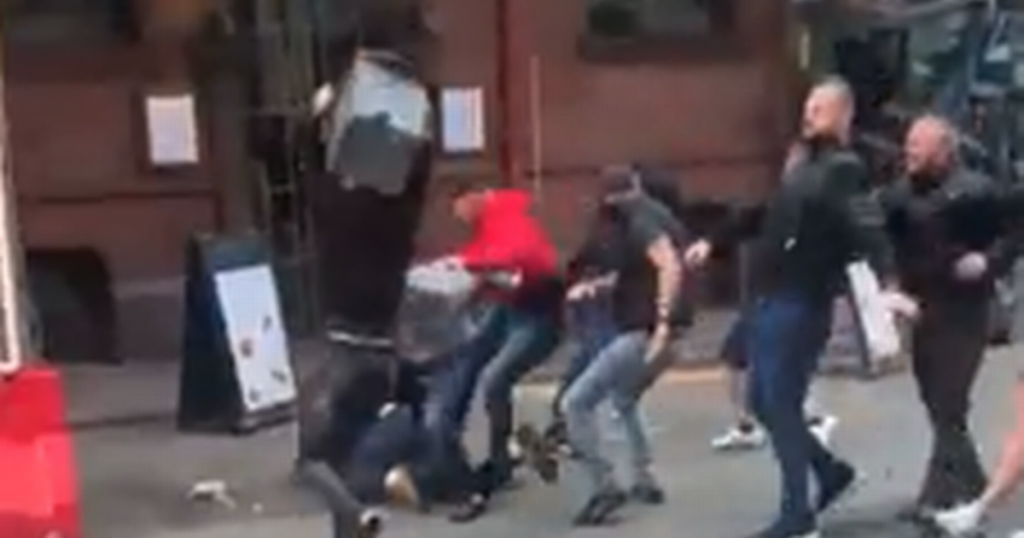 Leeds football fans have clashed with Manchester United supports ahead of their Premier League match today.

Crowds have been gathering ahead of the lunchtime kick-off game as the old rivals go head-to-head in their opening fixture of the new season.

But despite the excitement for full crowds to be back at stadiums, a handful of supporters were involved in ugly scene with police being forced to intervene, reports the Daily Star.

In a video uploaded to social media, a fan wearing a Manchester United shirt is seen sat in a cafe while a man outside launches a bin in anger.

The video, which appears to have been taken on Saturday morning, shows objects, as well as the bin, and punches being thrown before a lone officer forces the rival groups to disperse.

In addition, sirens can be heard in the background as the events unfolded, with one person in the cafe saying: “Oh my god.” In disbelief.

In leaving the scene, one man could be seen running with a chair as another officer arrived to help their colleague one day after police called for fans to be sensible.

In another scene outside the Piccadilly Tavern, a police van rushed to meet a crowd in a video captioned: “It’s not even 10am yet, and Leeds are kicking off in Manchester. Football is well and truly back!”

As recently as Friday, police urged those attending the game at behave responsibly with over 70,000 expected to watch on at Old Trafford.

He said: “It feels like a long time since we last had capacity crowds, but we have worked on hundreds of events in the past and our priority this weekend remains the same.

“That’s just one of four matches on our patch on Saturday afternoon.

“Our officers are working extended hours this weekend to help keep the public safe. All that we ask is that you behave responsibly so everyone can enjoy themselves.”