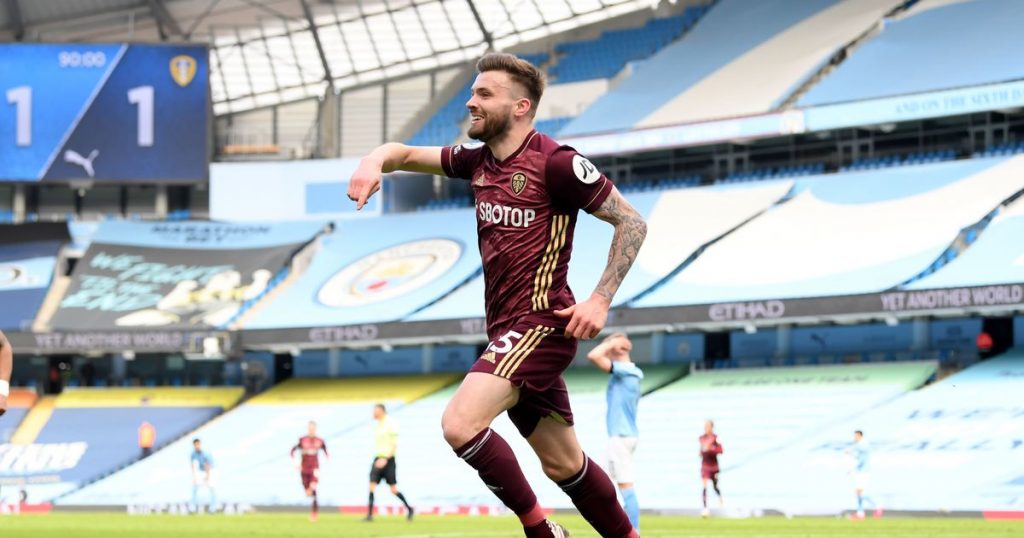 Leeds United fans were left somewhat bemused after watching Arsenal slump to a 5-0 defeat to Manchester City at the Etihad Stadium in Saturday’s early kick-off.

The Gunners were demolished by Pep Guardiola’s side thanks to a brace from Ferran Torres, as well as goals from Gabriel Jesus, Ilkay Gundogan and Rodri.

Like Leeds in April, Arsenal were reduced to ten men in the first half when midfielder Granit Xhaka was given his marching orders for a reckless tackle on Joao Cancelo.

Although Mikel Arteta’s side were already two goals down at that point of proceedings, Arsenal failed to lay a glove on City following Xhaka’s red and conceded three unanswered goals to cap another embarrassing afternoon for the North London side.

Today’s fixture was a complete contrast to that of Leeds’ trip to the Etihad Stadium in March, when captain Liam Cooper was shown red on the stroke of half time.

Marcelo Bielsa’s side rallied to soak up almost all of City’s attacking threat, before producing a clinical counter attack of their own in stoppage time that saw Stuart Dallas earn Leeds all three points.

Here is what Leeds fans have been saying on Twitter following the result:

@ChrisMGM: “Haha Arsenal losing to City. Beating City with 10 men not for everyone only the mighty Leeds.”

@GrahamWebb4: “Imagine not being able to win at Man City with 10 men. #lufc”

@The_ModernGame: “Somebody tell Arsenal there’s a blueprint for winning at Man City with 10 men. #lufc”

@Mathew_Stokes: “Poor old Arsenal, you can’t go down to 10 men away to Man City and expect to get anything from the game… #lufc”

@RITGK: “’It was always going to be tough for Arsenal to get a result at the Etihad with 10 men.’ Aye, okay then. #lufc”

@jef_munimaka: “Beating Man City away from home with 10 men isn’t for everyone. #lufc”

@Oramic: “Poor old Arsenal, you can’t go down to 10 men away to Man City and expect to get anything from the game… #lufc”

@jasonoflynn11: “Beating Man City at the Etihad with 10 men. It’s not for everyone. #lufc @dallas_stuart”