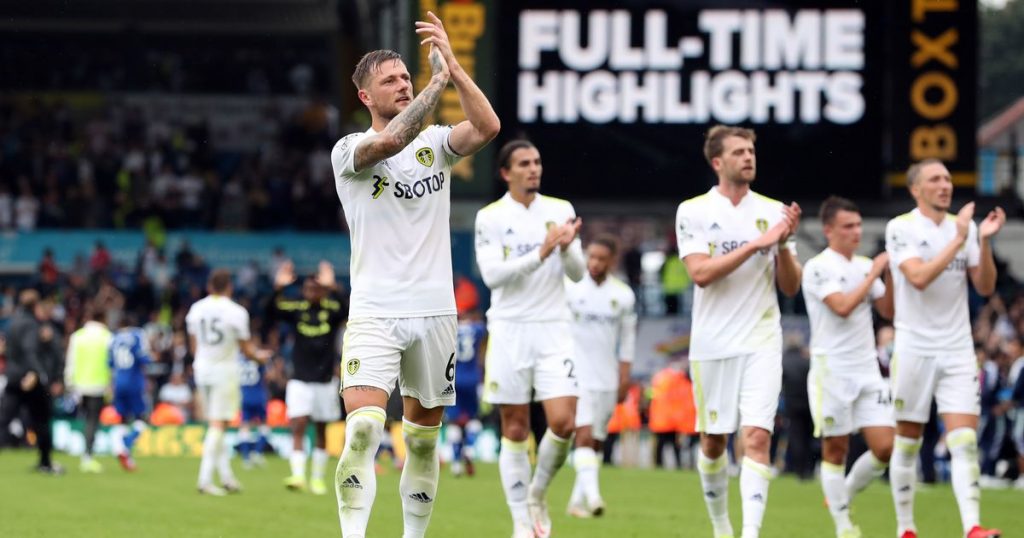 Something to cling onto

One of the more painful aspects of last weekend’s hiding at Manchester United was the fact it was the first day of the season for Leeds United.

There was nothing before it for fans to comfort themselves with. Last season is in the past and there was the stark reality of a four-goal losing margin to contend with right off the bat.

There needed to be some sign of life in Saturday’s clash with Everton, some semblance of the form which saw the club romp to ninth in the Premier League, just something to believe everything will be okay this season.

The team delivered that. While Jordan Pickford has had tougher afternoons, there was enough in the 70 per cent possession and 17 shots to see there is still a top-flight team there waiting to click.

“The game today was a big test for the team and this was multiplied because we were behind twice,” Bielsa said after the match.

“To have been able to draw the game and to have dominated it for so many moments, they are aspects to value.

“Given the amount of minutes we dominated, we should’ve created more chances at goal and we should have conceded fewer chances at our [goal].

“We played a game against an opponent that didn’t need to dominate us to create chances.”

It would have been hard to go downhill from last weekend’s drubbing, but this was so much more like the Leeds we are used to under Bielsa.

There was rustiness and a disjointed nature to the attacks at times, but there is plenty to build on heading to Burnley next weekend.

One point from the opening six may not be an ideal start, but zero from six, as it looked when Demarai Gray wheeled away with Everton’s second, would have had many jumping to irrational, concerning conclusions.

It was noticeable how much Darren England let run during Saturday’s game. There were a number of niggly fouls or contacts between players which you expected him to blow for.

And yet the whistle didn’t come. It was refreshing and made for a far more entertaining spectacle. Players can no longer rely on a referee to bail them out if they’re out of position or off the pace.

It’s natural to wonder whether this suits Leeds. As one of, if not, the fittest teams in the division, it surely suits Bielsa’s Leeds to have the shackles of a whistle taken off them.

Let the horses run free and watch them annihilate the opposition as they go up and down the field, running opponents ragged, exploiting the gaps left behind.

Mateusz Klich’s goal came from such a gap on Saturday. The Toffees, in that instance, could not live with the blitz of the Leeds attack anymore. Klich was through.

While it may suit United going forward, when they’re defending they may find themselves with issues. It was Dean Smith who first suggested how much Bielsa’s Leeds like a tactical foul when they are being countered. It’s a notion the Argentine has contested.

The Ayling Flop, you can be sure, will not be looked upon as favourably if referees really are wanting to overlook the more minor stoppages in play.

Bielsa, of course, saw the pros and cons of the argument before deciding it’s not an advantage or a disadvantage.

“It’s true that the refereeing is more lenient now,” he said. “I wouldn’t be able to tell you if that favours our style of play.

“It allows us to recover the ball easier because there are fouls which are not whistled and it doesn’t allow some of our attacks to develop because you need a higher dosage of speed.

“I think adding and subtracting in the end, there are no big differences.”

It was impossible trying to fight the hairs on the back of your neck rising, even as the team warmed up with the cacophony of support along the Revie Stand.

If that was the hors d’oeuvre, the main course was something quite spectacular.

Yellow flags had been stationed by every seat in the stadium and the waving throughout the final 10 minutes before kick-off made for quite a scene.

The noise rose and rose until Marching on Together peaked before the players had even appeared from the tunnel, perhaps a sign of how eager everyone was to blow away the cobwebs.

The wall of sound showed no signs of diminishing until at least beyond the half-hour mark when the penny possibly dropped on the team’s precarious position in the game.

It’s arguably the least significant moments in a game where the crowd makes a difference. Colleague Joe Donnohue made an excellent point in the press box about Patrick Bamford’s pressing.

What was a seemingly innocuous charging-down of an Everton clearance, which only yielded a goal kick, was roundly applauded on all sides.

That support, that audible encouragement, appreciation, then stays with Bamford and the rest of the team the next time they try to assert Bielsa’s high press.

It was a welcome return and memorable occasion. Who knows what role the fans may yet have on where this campaign goes for the Whites.

Three matches and three goals for Raphinha against the Toffees. None of them have been half-bad either.

It’s a neat trend being created by Raphinha, but the timing of this one felt especially significant as his first in front of a Leeds crowd.

It’s a mark of the Brazilian to see him ask for the ball in order to restart rather than celebrate with the fans at the first opportunity.

The quality of this weekend’s goal was right up there with the one he struck at Goodison Park last season to seal three points for the Whites.

To hit the ball first time, from that range, through a crowd of bodies was magnificent. You hope this is only the beginning of a love affair between player and supporters.

It’s a talking point which is fast becoming something of a stuck record, but Kalvin Phillips makes this team tick.

The team were so much more solid with him in the middle from the outset. Phillips brought strength, tackling, positioning, nous, passing and agility to that central channel.

Whether it was keeping Richarlison pocketed or delivering that sumptuous, deep, cross-field pass into the box for Liam Cooper to supply Raphinha, Phillips pumped rhythm back into the whole team.

While it was a 2-2 game and Everton can fairly argue a draw may have been a fair result, it never seemed as though any of their danger came through the centre, where Phillips was crushing everything in his path.