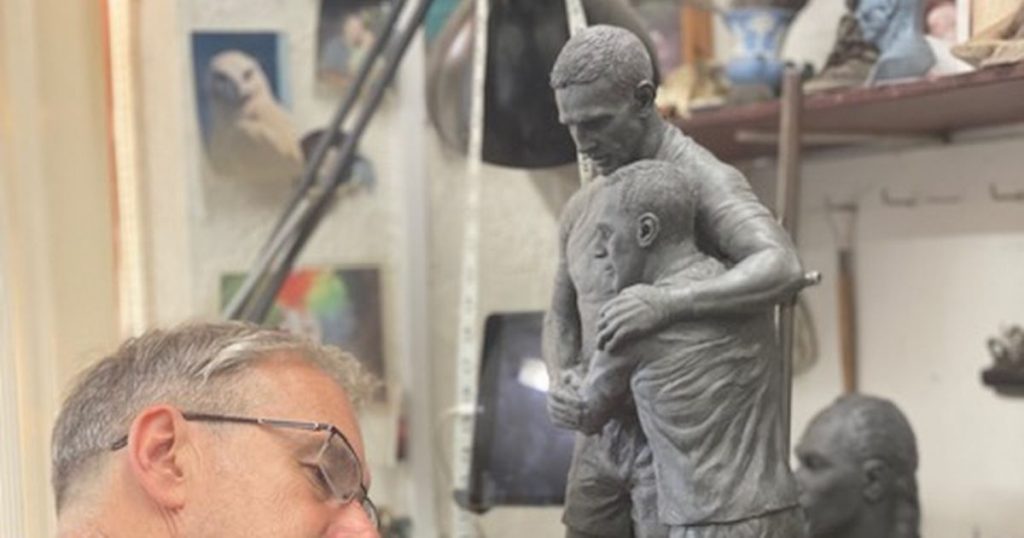 Leeds Rhinos have unveiled plans for a unique statue to celebrate two of the club’s greatest-ever players in Kevin Sinfield and Rob Burrow and also the close bond behind the entire golden generation.

Sinfield captained Leeds to seven Grand Final wins and Burrow played in all of them before adding an eight winner’s ring to his incredible medal haul after featuring in the 2017 title decider against Castleford Tigers.

The pair, who are close friends, played in twelve winning finals together during a glorious period in the club’s history but the moment chosen to be immortalised in a statue does not feature a trophy or even a rugby ball.

Instead, it is from the historic fundraising match held at Emerald Headingley in January 2020, just weeks after Burrow had been diagnosed with motor neurone disease.

The image shows two friends and team mates supporting each other in the toughest moment and is a tribute to the golden generation of players who grew up together and made history together on the field but also forged bonds that will last a lifetime.

Leeds Rhinos are giving fans the chance to be part of plans to honour these two great servants.

Earlier this year, the club unveiled the first ever statue at Emerald Headingley statue in tribute to legendary player John Holmes which has pride of place at the back of the Tetley’s South Stand for fans to see as they arrive on match nights.

The plan for the Sinfield and Burrow statue is for it to sit in the corner of the stadium looking down onto the hallowed turf that both players graced.

Sculptor Steve Winterburn, who created the John Holmes statue as well as the iconic Rugby League heroes statue at Wembley Stadium, has made preliminary models of the potential new statue although no commission has been placed as yet.

Leeds chief executive Gary Hetherington said: “I think Rob and Kevin perfectly encapsulate everything we hold special about the sport of Rugby League and their records on the field alone would merit a statue here at Emerald Headingley.

“However, they have both transcended not just Rugby League but sport to become national figures because of Rob’s battle with MND and Kevin’s unstinting support of his friend.

“They were part of a special group of players and this statue acknowledges that bond.

“We were proud to unveil the first statue in the 130 years of Emerald Headingley earlier this year with the John Holmes statue and I am sure this too will become an iconic and artistic addition of our wonderful home.”

Bob Bowman QPM, Chief Operating Officer of the Leeds Rhinos Foundation, said: “As we saw with the John Holmes statue, it is fantastic to have this opportunity to bring another piece of public art to Emerald Headingley Stadium.

“Kevin and Rob are such inspirational figures for young and old supporters and I am sure many will be keen to show their support for the campaign.”

Leeds Rhinos Foundation have opened an online fundraising option for fans to help raise the £100,000 target needed to make the dream a reality.

Fans can donate online at virginmoneygiving.com/fund/Brothersinarms.co.uk plus UK tax payers can donate even more by opting to tick the option for Gift Aid.