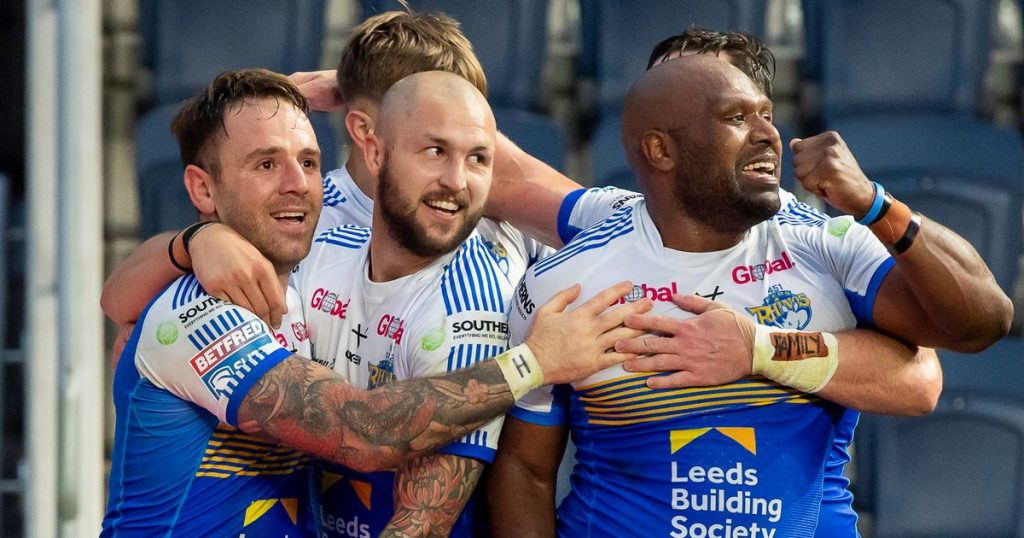 Richie Myler: A reassuring presence at the back in a relatively inexperienced Leeds Rhinos side and scored a crucial try just before half-time. 6

Luke Briscoe: Limited opportunities in good ball but did his job coming out of backfield. 6

Harry Newman: Forced off with a head injury in the first half but passed his HIA and did a good job on Jake Wardle, kicking two goals as well to show he has another string to his bow. 6

Tom Briscoe: Moved back to centre in the absence of Konrad Hurrell before finishing on the wing, with the experienced outside back producing a solid performance. 6

Ash Handley: Backed up Callum McLelland’s break to score the opening try but appeared to be hampered by an issue before being forced off in the early stages of the second half. 6

Rob Lui: Uncompromising in defence and gave the Rhinos a spark in attack, scoring the try that ended Huddersfield Giants’ hopes of getting back into the game. 7

Callum McLelland: Kicking game was a mixed bag but the young playmaker was one of Leeds’ biggest threats with ball in hand, laying on Handley’s opener with a fine piece of half-back play. 7

Bodene Thompson: A willing worker as ever as he kept Huddersfield honest. 6

Kruise Leeming: Another influential display from the hooker, coming up with one of the plays of the game for Lui’s try to put Leeds out of sight. 7

Zane Tetevano: Did big minutes and led from the front with a typically powerful performance, although he blotted his copybook with a yellow card for a late hit in the closing stages. 7

Morgan Gannon: It is hard to believe the big forward is only 17, with the youngster causing havoc at times with his dangerous running. 8

James Donaldson: Went about his work quietly but effectively. 6

Jarrod O’Connor: Made an eye-catching break in the first half and played his part in a vital win. 6

Tom Holroyd: The young prop looks increasingly at home in Super League, with his efforts helping to keep the Rhinos on top in the middle. 6

Brad Dwyer: Only came on for the final 10 minutes, at which time Leeds were hanging on somewhat. 6

King Vuniyayawa: Some strong carries mixed in with a few handling errors. 6

Sam Walters: Had stints in both centre positions due to injuries and did an admirable job. 6