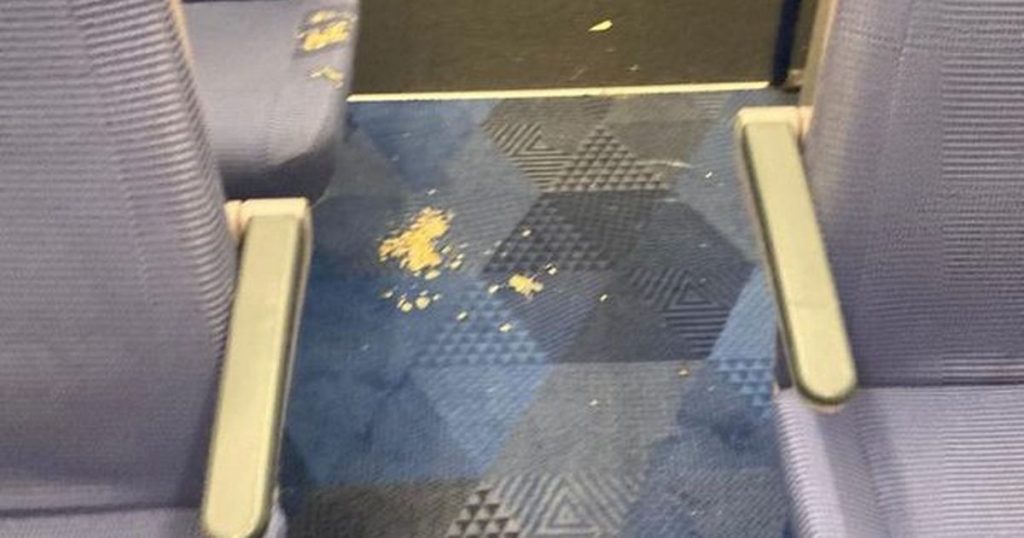 A train from Leeds was left in a “disgusting mess” after festival-goers vomitted and took drugs on board.

A HullLive reporter witnessed heaps of rubbish and sick left on seats after drunk and drugged-up passengers returned home from Leeds Festival 2021 to their homes along the line to East Yorkshire on Saturday night.

Lucy Marshall rode the 10.37pm service from Leeds to Hull yesterday (August 28) and said the journey was such “carnage” even the train conductor was “flabbergasted”.

READ MORE: The stark difference for men and women trying to go for a wee at Leeds Festival

And some people were so intoxicated their friends had to carry them on and off the train, with one girl so drunk her head was “flopping all over the place”.

Lucy said: “Before getting on the train, one group of friends had to carry their friend as her head was flopping all over the place. They were laughing and smiling, but she couldn’t stand up so four of them had to carry her.

“Loads of people were singing Sweet Caroline in the station and it was actually pretty nice to see people having fun once again. But getting on the train – it was utter carnage. I’ve never seen anything like it on a train service.

“The train conductor was flabbergasted, drugs were being taken, people were screaming and shouting. The poor cleaners getting on the train afterwards seemed less than impressed as they found sick covering numerous seats.”

Unsurprisingly, the train was left in a state when the passengers alighted – with rubbish left all over the tables and on the bathroom floor and uneaten food trodden into the train carpets.

And rude passengers, emboldened by drink and drugs, argued with conductors when they were told that they could not sit in first class seats.

Lucy spoke to some other people on the train and one passenger told her that they had even seen people “jumping up and down on the train”, singing and swearing loudly.

When a passenger expressed that people ought to “calm down” one festival-goer said: “Oi why are some people being dead boring on this train? Get the music on now. It’s party time, I need some music or I’m going to fall asleep.”

The train conductor, who appeared “flabbergasted” by the ordeal, asked individuals to show their tickets as they continued to mess about. He said to one passenger who didn’t attend the festival, “it’s mad isn’t it?”.

Lucy added: “There was quite a contrast between those who were clearly just trying to get home and enjoy a quiet train journey, and those thinking the train was the next nightclub.”

A group of three boys and one girl were surrounding the communal toilet area where they were playing music loudly. They kept laughing and joking about leaving the toilet door open so all the train could see the individual using the toilet.

One member of the group said: “Oi shall we have one before we get off?”, as they all gathered in a circle.

One witness said: “Have you seen what they’re doing?”, as one of the group said to the other “just do it on the floor or toilet seat” – a witness recalled seeing them pass a small bag between them.

One girl, who appeared asleep for most of the journey, then woke up and was sick all over the floor and numerous seats.

Four cleaners got on the train as it arrived at Hull Paragon Interchange and said the mess was “disgusting”.

One cleaner was spotted shaking her head and put her hands up in the air as she found the sick.

It comes as coronavirus restrictions on train services have eased. Many continue to wear their mask, while others are choosing to ditch it for good.

What’s more, party lovers have been enjoying life being ‘back to normal’ where they can go to pubs, bars, clubs, and festivals restriction free.

TransPennine Express do not withhold specific rules about etiquette on its journeys but have measures in place to keep customers as safe as possible, particularly ensuring Covid-safe measures are in place.

They state: “As well as following government guidelines on social distancing and face masks, we’ve also put safety measures in place across all our trains and stations so you can feel comfortable before, during and after your journey. This includes regularly cleaning and sanitising every train, in addition to cutting the capacity of our services by half to allow you to distance from your fellow passengers.

“There are a few things you may want to still think about if you’re taking a journey by rail sometime soon. From planning ahead to following the rules around face coverings, here’s just a few pointers on what you can do to travel safely with TransPennine Express.

“To protect our customers and staff, we have greatly increased cleaning on board our trains and at our stations particularly focusing on cleaning those areas that customers and colleagues are more likely to touch, such as handrails, door buttons, tables, arm rests, toilets and ticket vending machines.”