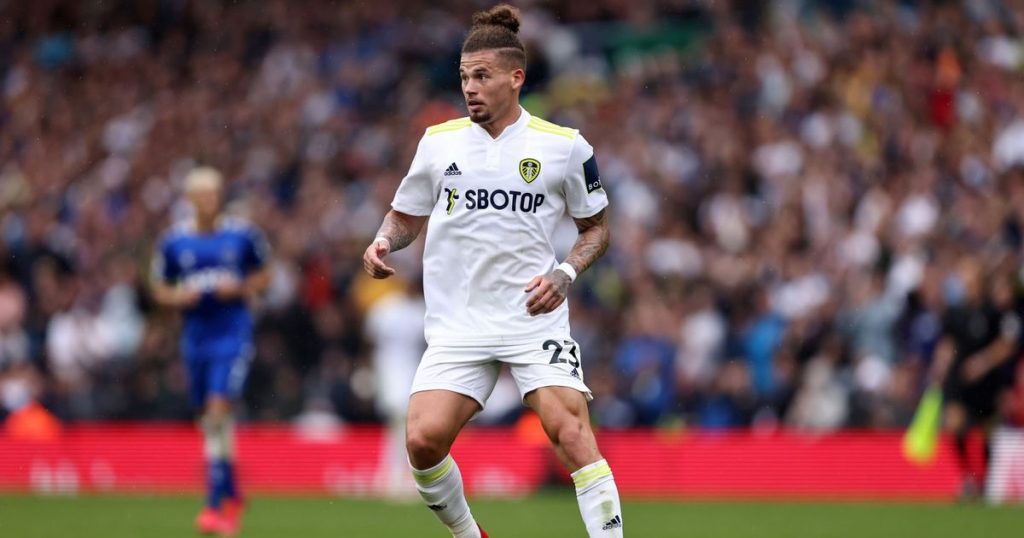 Kalvin Phillips completed 57 of his 66 attempted passes against Everton yesterday, which equates to 86.4% accuracy.

That’s good, but fairly middle of the road for a player employed in his position yesterday.

By comparison, Rodrigo completed 69 of his 77 passes in Manchester City’s 5-0 win over Norwich City and Liverpool’s Jordan Henderson was successful with 66 of his 73 pass attempts against Burnley.

Both Liverpool and Manchester City enjoyed a lesser share of possession in their matches against the Clarets and the Canaries, than Leeds had over Everton.

So, why single out Phillips’ distribution in a fairly routine 2-2 draw with a fellow mid-table side?

Because he completed at least two passes to each of his outfield teammates over the course of 90 minutes. He was omnipresent.

No other Premier League player managed the same yesterday – so it’s fair to say, that was quite out of the ordinary.

On top of that, the England international made 14 ball recoveries – more than any other player on both sides at Elland Road.

Hold on, we’re not done yet.

Phillips also covered more ground than any other player as Leeds drew 2-2 with Everton.

The 11.57 kilometres he ran was a fraction further than Everton’s Abdoulaye Doucoure according to Opta – but it was further.

There is a valid argument that recovering possession, running plenty and making sure every teammate has received a pass from you does not win football matches, and that’s true – Leeds did not win yesterday.

But they almost certainly would have lost without Kalvin Phillips on the pitch.

It was the 25-year-old who managed to dig out a cross from underneath himself to find Pascal Struijk and Liam Cooper, falling to the feet of the latter defender who in turn laid on Raphinha for his missile beyond Jordan Pickford with 20 minutes to play.

It was Phillips’ brief but decisive burst of acceleration past Doucoure near the touchline which afforded him the time and space to stand up that cross into the area.

We’ve had our say debating this topic, but we want to hear from you, the fans. After all, you are the lifeblood of Leeds United.

At the bottom of this page you will find our comments section in which we throw it to you to take part in the extended debate. Agree with what we had to say? Or do we need putting right? Share your thoughts with us and join the conversation.

And if there are no comments yet, then it’s your chance to get the ball rolling.

Last weekend as Leeds were beaten in Phillips’ absence at Old Trafford, Robin Koch endured a fairly torrid afternoon deputising for the Englishman, left alone for long periods with only Bruno Fernandes for company who toyed with the German defender, escaping his clutches at crucial moments.

Leeds’ dominance over the ball against Everton meant Phillips was not engaged in a man-marking role like Koch’s – not any more than usual, anyway – but rather had a different brief; to keep moves ticking.

Phillips had 80 touches in 90 minutes at Elland Road, 79 of which came between both penalty boxes. His touches, passes and general activity was heavily concentrated within the middle third of the pitch.

At Manchester United, that was not possible and Leeds’ attackers were required to work back arduously.

As per Opta, Raphinha made 23 sprints versus Everton, compared to 35 against Manchester United – many of which were made tracking back as Leeds’ arch-rivals broke through the middle.

It is perhaps little surprise then to discover that Robin Koch made nine ball recoveries at Old Trafford, five fewer than Phillips did in the same role at Elland Road yesterday.

It must also be said that Leeds had 70% of the ball at Elland Road, and just 51% against Man United. It’s a lot harder to recover possession when you already have the ball.

Against Everton, that was less of a concern, despite the dominance over the ball.

Against Everton, Kalvin Phillips featured right from the start.

The specifics of Phillips’ role are explicit and complex, so much so the player himself admitted it took months to learn the finer points of what Marcelo Bielsa was asking of him.

Now though, the 25-year-old has it perfected, or as close to perfection as is humanly possible in a game which encounters a great deal of variance and mitigating factors.

While Leeds’ defensive display was anything but perfect as Elland Road welcomed back fans, it was aided by Phillips’ presence.

In distributing securely, recovering possession repeatedly and covering more ground than any other, Phillips’ mature, calming presence played a role in Leeds fighting back twice to register their first point on the board in 2021/22.