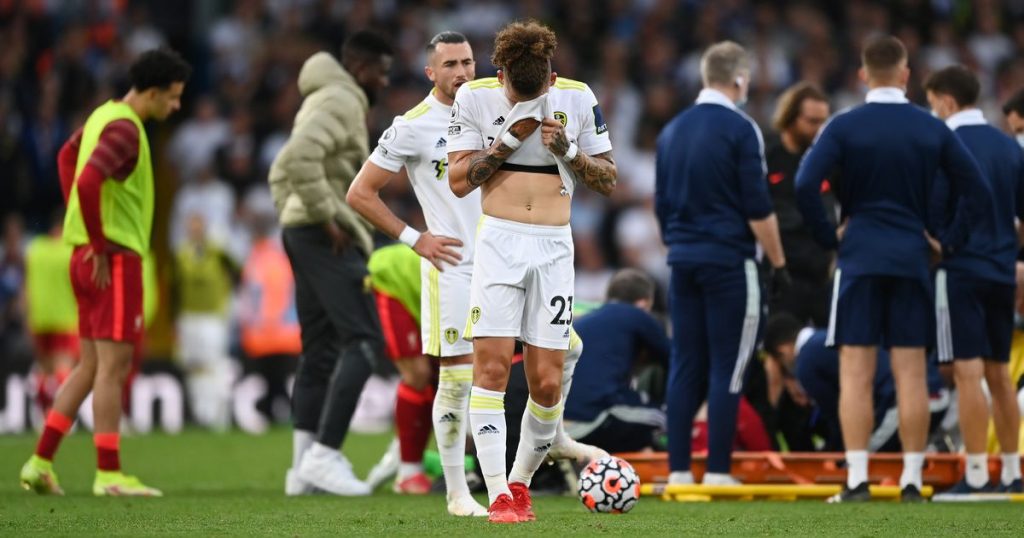 Kalvin Phillips has issued a message of support to Harvey Elliott after the Liverpool teenager suffered a suspect broken ankle against Leeds United.

The Reds midfielder was stretchered off in the second half at Elland Road after a freak accident following a challenge from Pascal Struijk.

The Dutchman was sent off for the tackle, leaving Leeds with ten men for half an hour, already trailing 2-0.

Liverpool continued to control the contest after that point and added a third through Sadio Mane, who could have added to the scoreline much sooner had it not been for wasteful finishing and good work from Illan Meslier.

With players from both teams visibly distressed by the injury to Elliott, Phillips sent a message of encouragement after the match.

“Get well soon mate, stay strong,” he wrote on Twitter.

After the match, Marcelo Bielsa sent his best wishes to Elliott, whilst defending Struijk.

“I’m totally sure that there was no bad intention. I don’t know how to qualify it because any negative qualifier would be hard to say, but obviously, there was some imprudence or an excess of power. These types of recoveries of the ball are totally frequent.

“The difference here was that the follow-through with Pascal’s speed and power hit the opponent and this caused an injury. I regret dearly that such a young player playing at a high level has been interrupted by this. I hope he is able to get back.”