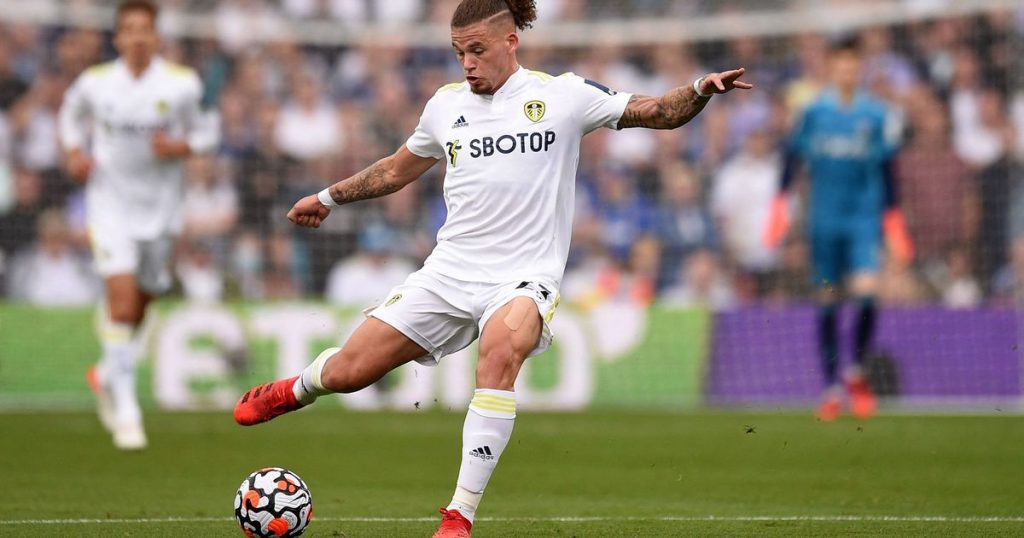 Four league games without victory is a bitter pill to swallow for Leeds United following their latest defeat, however the Whites community can take solace in the fact they are a much richer side with Kalvin Phillips.

In the 3-0 defeat to Liverpool, both he and Illan Meslier did not deserve to end up on the losing side, which perhaps speaks to their top-line potential.

Phillips‘ distribution was unmatched; his medium-to-long range passing helped Leeds out of heavy Liverpool pressure and his defensive work helped plug gaps which appeared all too frequently.

This was a game in which Liverpool indisputably won the midfield battle, but Phillips put up a serious fight.

It has become normal to see Phillips carrying out the defensive duties of two men in his role as the single pivot in front of Leeds’ defence.

Marcelo Bielsa’s formation with two No. 8s who routinely fly forward to support attacks, means Phillips is often the lone ranger, covering lateral spaces with his tremendous engine, pressing and harrying opponents whenever they enter his zone.

For someone who commits himself so frequently, it is remarkable how little he is spun by opponents crying out for an opportunity to make an overzealous foe look rather foolish.

Leeds conceded three on the day, and perhaps should have seen more chalked against them, but without Phillips, it was the type of game in which the Whites would have been utterly and helplessly overrun.

Phillips attempted 44 pressures, as per FBRef.com – once every two minutes. Given Leeds had possession 43% of the time, that equates to Phillips pressing a Liverpool player every single minute in which the Reds had the ball.

No player attempted more pressures in the defensive third, or middle third, while the England midfielder ranked behind only Diogo Jota and Patrick Bamford for pressures made in the final third. He is stationed at the base of midfield, and yet plays everywhere.

Phillips also made more passes under pressure than any of his Leeds teammates, completed more switches of play and was successful with 14 of his 18 long pass attempts.

His mastery in possession was evident to any and every spectator within Elland Road yesterday, despite the fact Leeds as a team faltered.

While it is a blessing that Phillips performed so admirably in trying circumstances, it does create a potential future issue.

Players who go toe-to-toe with the elites during unequal contests are often lured to those same clubs.

Kalvin Phillips’ connection with Leeds is a unique one in modern football and means any attempt to prise him from Elland Road will not only be expensive, but a decision which will weigh heavy on his mind.

Thiago and Fabinho were lauded for their midfield performance by a litany of national journalists, but it was Kalvin Phillips who forced them to draw upon their utmost from deep within.

It is no secret the England midfielder is currently performing at a level which exceeds the Leeds average.

There are players the club need not worry about losing: Luke Ayling, Stuart Dallas, Patrick Bamford – individuals so finely-tuned to Bielsa-ball that without him, they would still be Championship middle-men at best.

Phillips on the other hand, has immense transferable skills, which is both a glorious benefit and troubling concern. His pressing intensity, work-rate and high-level distribution mean he could quite comfortably eke out a starting berth in a Champions League-calibre midfield.

After all, he has seemingly ousted Liverpool captain Jordan Henderson from his starting place in the England setup.

With a contract running until 2024, it may appear as though Leeds have plenty of time to ponder their next move – but in reality an extension must be high on the agenda.

Midfielders who routinely turn in performances of yesterday’s standard do not belong in teams who occupy a spot just outside the relegation zone.