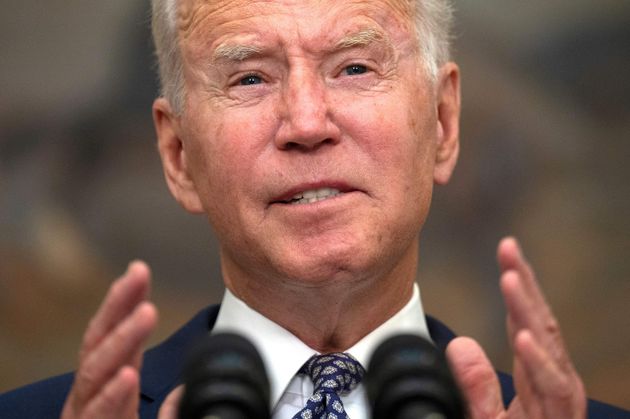 US president Joe Biden speaks about the ongoing evacuation of Afghanistan from the White House.

Joe Biden has said the US is “on pace” to withdraw his country’s troops from Afghanistan by a self-imposed August 31 deadline as he argued “the sooner we can finish the better”.

The US president’s defiance came amid failed efforts from the G7 group of world leaders to get the timetable extended amid growing fears around America’s sharp exit from the country and having enough time to complete evacuations.

The president sent thousands of US troops to the Kabul airport after the Taliban militant group took over the city and much of the country less than two weeks ago.

In a speech on Tuesday, Biden argued the US is at more risk from terror attacks the longer it stays.

But he said the timetable is contingent on the Taliban not hindering US efforts, and that contingency plans were being developed.

Biden said his discussion with G7 leaders today had been “productive” and told reporters: “There was strong agreement among the leaders both about the evacuation mission underway as well as the need to co-ordinate our approach to Afghanistan as we move forward.

“First, on evacuation, we agreed we will continue our close co-operation to get people out as efficiently and safely as possible.

“We are currently on a pace to finish by August 31, the sooner we can finish the better. Each day of operations brings added risk to our troops, but the completion by August 31 depends upon the Taliban continuing to co-operate, allow access to the airport for those who we are transporting now, and no disruption to our operations.”

“In addition, I have asked the Pentagon and the State Department for contingency plans to adjust the timetable should that become necessary.”

President Biden says the completion of operations in Kabul “depend upon the Taliban continuing to cooperate”, adding there will be contingency plans to “adjust the timetable should that become necessary”.

The nearly 6,000 US troops are helping to evacuate American citizens and at-risk Afghans and to protect the airport so other countries can evacuate their citizens as well.

It came after Boris Johnson failed to persuade the US president to shift his position following a virtual meeting of the G7, and the prime minister conceded that the timetable for the evacuation from Kabul airport would not change.

“We’re confident we can get thousands more out, but the situation at the airport is not getting any better.”

In his speech, Biden said US and allied forces run the risk of attack by ISIS affiliates and straining a “tenuous” working relationship with the Taliban if they stay in Afghanistan longer.

The president said there were “increasing risks” for US troops and their allies staying in Afghanistan beyond August 31.

He said: “There are real and significant challenges that we also have to take into consideration the longer we stay, starting with the acute and growing risk of attack by a terrorist group known as ISISK, an ISIS affiliate in Afghanistan, which is a sworn enemy of the Taliban as well.

“Every day we are on the ground is another day we know that ISISK is seeking to target the airport and attack both US and allied forces and innocent civilians.

“Additionally, thus far, the Taliban have been taking steps to work with us so we can get our people out, but as a tenuous situation – we have already had some gunfighting break out – we run a serious risk of it breaking down as time goes on.”

Biden said the US and its allies, including the UK, will not take the Taliban’s word that Afghanistan will not become a base for terrorists again.

The president told reporters: “The leaders of the EU, NATO and the UN all agree that we will stand united in our approach to the Taliban.

“We agreed the legitimacy of any future government depends on the approach it now takes to upholding their international obligations including to prevent Afghanistan from being used as a base for terrorism and we agreed that none of us are going to take the Taliban’s word for it.

“We will judge them by their actions and stay in close co-ordination on any steps that we take moving forward in response to the Taliban’s behaviour.”