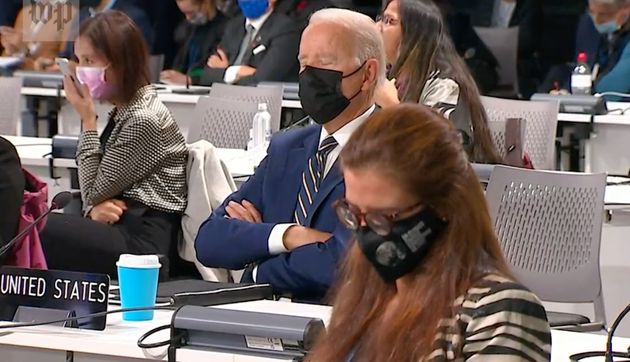 US president Joe Biden had his eyes closed at COP26

Joe Biden looked like he was just taking a quick nap during the first day of COP26, the UN’s landmark climate summit on Monday.

The US president couldn’t keep his eyes open during human rights activist Eddie Ndopu’s speech on the climate’s impact to disabled people.

The US president had arrived in Scotland that morning, touching down in Air Force One in Edinburgh before making his way to Glasgow 45 miles away.

It’s worth noting that the president’s usual base in Washington DC is currently four hours behind UK time.

But Biden had just come from the G-20 Summit – where 20 of the world’s most economically developed nations meet for annual talks – in Rome, which is actually one hour ahead of UK time.

The talks have also been hailed as a final chance to get a handle on the climate crisis, and more than 100 world leaders have gathered in Scotland to mark this 12-day conference, making Biden’s blunder all the more embarrassing.

Some people were sympathetic, with Sky News’ Kate McCann tweeting: “Such a horrible feeling when you can’t keep your eyes open and you… know… you….. can’t…. fall …. asleep.”

But, she added: “I’m not the president.”

Biden also had to give a speech to the room of world leaders shortly after his exhaustion became apparent, although it’s safe to say he was much more alert for that.

Biden has faced criticism for his public blunders before.

He infamously forgot Australian prime minister Scott Morrison’s name while conducting a joint press conference with him about an important defence pact between the US, the UK and Australia.

The Democrat was known for his verbal gaffes during his eight-year stint at the vice-president under Barack Obama as well.

Biden’s predecessor, Donald Trump, even called him “sleepy Joe” during the run-up to the US presidential election in 2020, referring to his opponent’s regular slip-ups.