Fans of Japanese video games couldn’t believe their ears as Olympic athletes paraded into Tokyo’s National Stadium during the opening ceremony for the 2020 Games on Friday: the orchestra was playing tunes from some of their favourite games.

In a celebration of Japanese popular culture that is appreciated worldwide, the entry parade was set to tunes from games developed by Sega, Capcom and Square Enix.

It kicked off with “Overture: Roto’s Theme” from Dragon Quest. Next up was “Victory Fanfare” from Final Fantasy. The parade featured more tunes from Monster Hunter, Soulcaliber and Sonic the Hedgehog. (Check out the original list in Japanese from Nikkan Sports, or in English from Polygon.)

According to Classic FM, the music from Kingdom Hearts was composed by Yoko Shimomura, who is responsible for the music for some of the biggest video games ever made. Fans were delighted to hear her work being incorporated into the ceremony.

While the list didn’t feature widely recognised tunes from cultural juggernauts like Mario Bros. or The Legend of Zelda, the music helped give a sense of atmosphere to the ceremony, which was held in almost an empty stadium due to coronavirus restrictions.

Olympians waved mostly for the cameras in the made-for-TV ceremony, which only had about 1,000 people in attendance at the 68,000-capacity stadium ― VIPs like Japanese Emperor Naruhito, first lady Jill Biden, members of the International Olympic Committee and journalists.

In another nod to Japanese pop culture, the placard for each country’s delegation was in the style of a speech bubble from manga, which is Japanese comics and graphic novels. The signs had the country’s name in English on one side and Japanese on another. 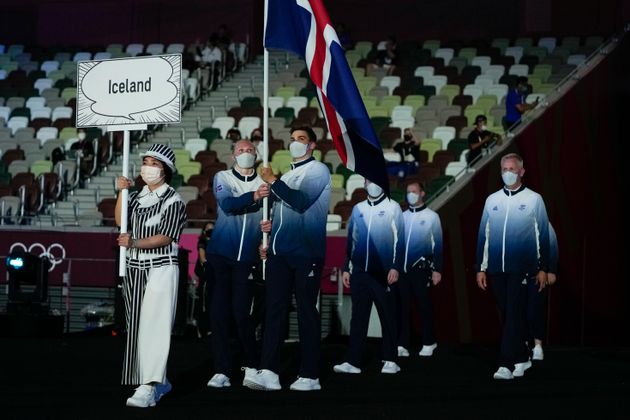 Snaefridur Sol Jorunnardottir and Anton Mckee, of Iceland, carry their country’s flag during the opening ceremony.

And in another tribute to Japanese pop culture, the Google Doodle, which is accessed by going to the google.com home page, also starts out with an anime-inspired theme, then moves to an incredibly elaborate ’80s-style arcade game.

The exposure to anime and manga from the Tokyo Games may serve to make the art forms even more popular worldwide, said Susan Napier, a professor of rhetoric and Japanese studies at Tufts University, according to The Washington Post.