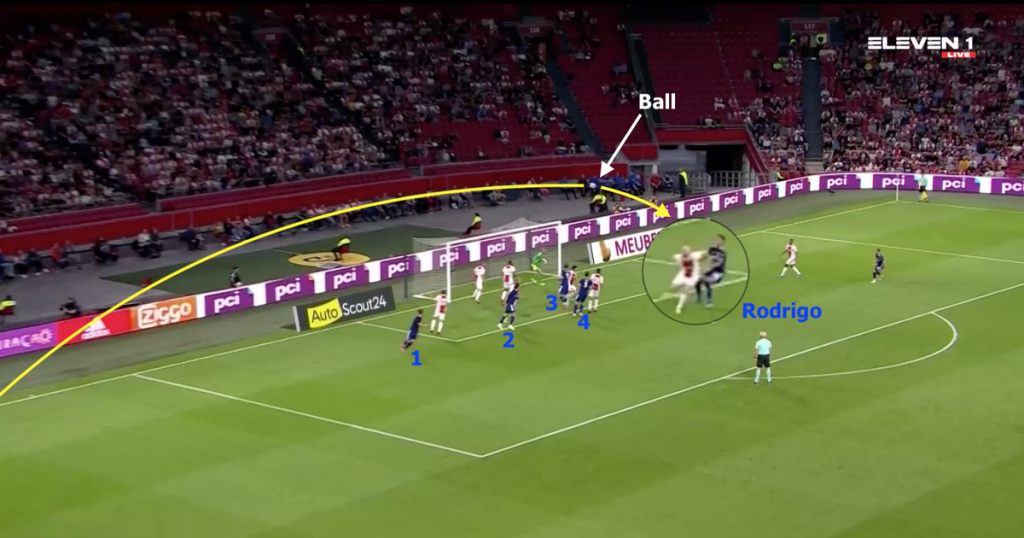 Leeds United were one of the notoriously poorer Premier League sides last season when it came to defending set-pieces.

Only Crystal Palace gave away good chances more frequently than Leeds at free-kicks and corners, as per Statsbomb – a rare Achilles heel of this Marcelo Bielsa team.

The assumption was that Leeds’ preferred method of defending set-pieces – going man-for-man instead of marking zonally – hindered the side and gifted the opponent an advantage in attacking the ball.

There is some credence to this assessment given that more often than not, the team who are attacking at a set-piece approach the lofted ball with all the momentum.

In short, it is a lot easier to steer a dropping ball in the direction it is already travelling as opposed to changing its course entirely.

Headed into this season’s curtain-raiser at Old Trafford, it appears not the defensive aspect of set-pieces that Leeds have been diligently working on during pre-season.

Instead, Leeds have developed a neat attacking corner routine that has already paid dividends in friendly fixtures.

The move co-ordinates the attacking runs of Leeds players at a corner, with three or four players racing to the front post, taking opposition defenders with them.

This then isolates one Leeds player and the nearest opponent closer to the back post, where he attempts to score with his head or create a knock-down opportunity for somebody else.

Proving this collective rush to the front post was no coincidence versus Blackburn, here is a second visualisation from Rodrigo’s headed chance against AFC Ajax.

Now, it’s all well and good using visualisations, but how does the real thing measure up? Quite well, actually.

The intention of this set-piece routine is twofold: to isolate a defender and create a separation from the rest of the players grouped inside the box.

In both cases, Struijk and Rodrigo make contact with the ball over their marker.

Struijk forces a save from the Blackburn goalkeeper, while Rodrigo’s header narrowly misses the target.

In the first example, as Jack Harrison swings in the corner; Leeds players have vacated the near side of the penalty area, ready to swarm into it when Harrison makes contact.

Multiple white shirts now occupy the centre and near-side of the six-yard box and surrounding area, leaving Struijk one-on-one with a defender who is clearly struggling to contain the Dutchman.

In this second example against Ajax, the separation – the space between Rodrigo and all other players – is clear to see.

As the corner is taken, four Leeds players rush to the near side, with little intention of getting any connection on the ball. Their job is to create the diversion.

Importantly, Rodrigo’s body language is much more relaxed as he allows his teammates to create the separation.

As seen in the second image, Rodrigo similarly has an advantage over the defending Ajax player – just as Struijk did against Blackburn.

The space he enjoys allows him to become isolated one-on-one with the Ajax player, whose backpedalling puts him at an immediate disadvantage.

Instead of going towards the front post – as they had done from previous corners in this game, just a single run attracts the Villarreal defenders who are on high alert.

That creates a 3-v-1 advantage at the back post, which directly contributes to Liam Cooper winning the initial header which crashes against the bar, and Patrick Bamford being the first to react to the rebound.

If Leeds can replicate anything of the sort against Manchester United on Saturday, it would be a fine reward for a summer spent on the training pitch.