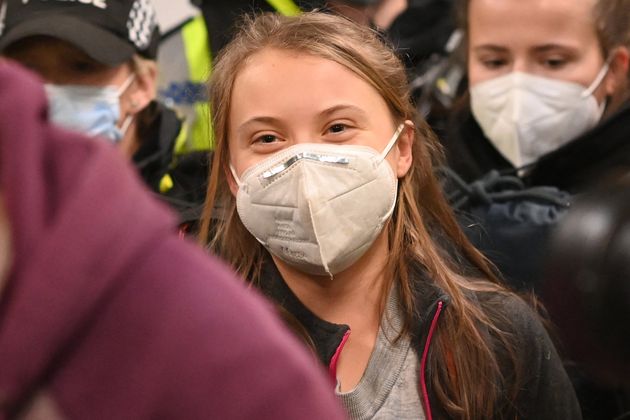 Greta Thunberg has not been officially invited to speak at the COP26 gathering in Glasgow but was swamped by activists when she arrived in the city.

Activist Greta Thunberg has hit out at Rishi Sunak for cutting taxes on domestic flights, saying it proves climate change is “not our main priority”.

The Swedish environmental campaigner and global sensation said the chancellor’s decision to cut air passenger duty by 50% was part of a “pattern” of policies that showed leaders were not taking “real action” against climate change.

Thunberg also addressed concerns about protests at the COP26 climate summit in Glasgow and defended the right of protestors to “anger some people” with their demonstrations.

Asked to give her reaction to Sunak’s policy in the Budget, Thunberg told the BBC’s Andrew Marr: “Of course we can’t talk about this in, like, one single policy and so on.

“But when you see a pattern of these policies, that all the time are avoiding taking real action, then I think you can draw conclusions from that pattern.

“That climate action is not really our main priority right now.”

Sunak has come under fire for the decision to cut APD, with critics saying it effectively incentivises flying at the same time that the UK is trying to persuade other countries to cut their emissions.

Thunberg has become a focal point for young activists across the world thanks to her leadership of Friday school strikes across the globe.

As she arrived in Glasgow for the COP26 climate summit she was mobbed by swamped environmental activists.

The welcoming reception she received comes in spite of the fact that she has not been officially invited to speak at the gathering of world leaders and activists, which takes place over the next fortnight.

In an interview with Marr, Thunberg was asked whether she had received an official invitation to speak.

“I don’t know, it’s very unclear, not like, officially,” she said.

“Of course, this is not just a question about me, but I think many people might be scared that if they invite too many radical young people, then that might make them look bad.”

Last month Thunberg dismissed global leaders’ words on climate change as “blah, blah, blah” — a sentiment she stood by when asked whether it was fair.

She said most people would agree with the Queen’s comments earlier this month, in which she suggested there was a lot of talk around tackling climate change but little action.

In a clip during a trip to Cardiff in which she appeared to be talking about the COP26 conference, the Queen could be heard to say it is “irritating” when “they talk, but they don’t do”.

Thunberg told Marr: “Yeah, I think most people agree with that.”

A key target for the conference is whether the UK will be able to succeed in persuading countries to stick to a commitment to prevent global temperature rising 1.5C above pre-industrial levels.

Ministers have sought to dampen expectations over such a deal, with COP26 president Alok Sharma saying it would be a “tough ask”.

Thunberg said it was “possible in theory” to reach an agreement to keep global warming below 1.5C, but she added: “It’s up to us if we want that to happen.”

Protest groups such as Insulate Britain have hit the headlines in recent months for attracting the attention of the British public through extreme methods, including by blocking motorways and glueing themselves to buildings.

Thunberg said as long as nobody is hurt protests, “then I think sometimes you need to anger some people.

“Like, for instance, the school strike movement would never have become so big if there wasn’t friction, if some people didn’t get pissed off,” she said,