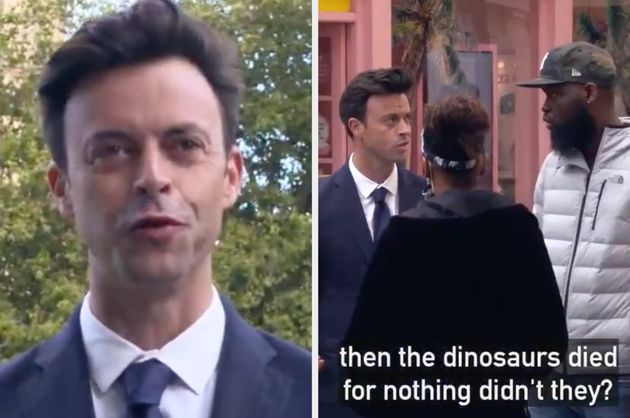 Featuring satirist Jolyon Rubinstein, the video saw him pose as a government representative talking to members of the public about green initiatives.

The parody is part of Greenpeace’s campaign for “actions not words” from No.10 when it comes to addressing the pressing climate crisis.

“As long as we can agree on a very loose definition of ‘committed’ and ‘green revolution’ and actually taking the ‘climate crisis seriously’.”

He then begins to stop people in the street and, in a serious tone, asks: “Should we really be putting ourselves in a position where we’re putting the planet before profit?”

Rubinstein also took on COP26, the UN’s climate summit which will be hosted by Downing Street in Glasgow and starts on Saturday.

Both China and Russia’s leaders will not be attending the pivotal climate talks despite being two of the world’s most polluting countries.

In the video, Rubinstein pointed out: “China isn’t really doing anything is it, so why should we?”

“Listen you’ve got to be realistic, we’re committed to increasing renewable energy production while simultaneously not upsetting our fossil fuel donors,” he continued.

“If we don’t really utilise those fossil fuels, then the dinosaurs died for nothing didn’t they?”

The satirist joked about the UN’s IPCC report released back in August as well, where world leaders were warned humanity is at “code red” when it comes to the climate crisis.

He told the public – with a straight face – that this warning doesn’t count as the UN didn’t say “what shade of red” they meant.

“The real climate criminals are the ones not freezing their bread,” Rubinstein joked, to the bemusement of passersby.

This comment stemmed from a headline suggestion made by the prime minister’s COP26 spokesperson Allegra Stratton.

She claimed the public should try to help with the climate crisis by taking “micro-steps” including not rinsing dishes before putting them in the dishwasher, putting bread in the freezer to prolong its shelf life.

The comment triggered a wave of criticism because such small daily tasks do not have the same effect as the titans in the fossil fuel industry.