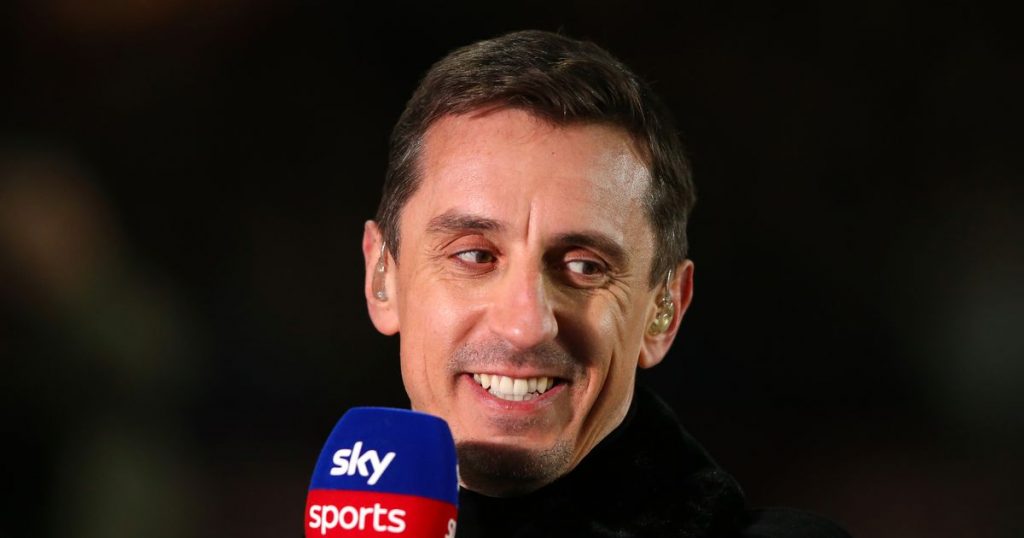 Leeds have made two visits to Manchester United since returning to the Premier League, losing 6-2 on the first trip last December before being on the receiving end of a 5-1 drubbing last month.

The Whites did, however, hold Manchester United to a 0-0 draw back in April when Kalvin Phillips managed to keep the influential Bruno Fernandes quiet.

“This Manchester United team are perfect for Leeds. I did the game last year where Leeds played well.

“But they got beat, 6-2 was it? Leeds will always concede five or six out here with the way they play. I mean we will rip them to shreds.

“Forget them. I love watching them, by the way. But we are perfect for them.”

The swashbuckling style of Marcelo Bielsa’s side can be high-risk, but has enabled them to get the better of much more expensively assembled teams on several occasions.

However, Neville is adamant the way Leeds set up will always leave them vulnerable when they make the trip to Old Trafford.

The absence of Phillips in last month’s defeat was certainly felt, as he had managed to nullify the threat of Manchester United’s midfield in April.

However, with defender Robin Koch deputising for Phillips, Fernandes was able to slip off the shoulder and drive the Red Devils forward.

Unless they come across each other in a cup competition, the next meeting between the two bitter rivals will take place on 19 February at Elland Road.

Leeds are still searching for their first Premier League win of the season, although they improved considerably after the heavy defeat at Old Trafford to hold Everton to a 2-2 draw.

The Whites then picked up a point away at Burnley and will return to action following the international break on 12 September when they host Liverpool.