Manchester City got their first win of the season with a 5-0 thumping of newly-promoted Norwich and Liverpool made it two from two with victory over Burnley.

Brighton beat Watford 2-0 to maintain their 100% start, as did Tottenham with a 1-0 win at Wolves and Chelsea with their 2-0 success away to Arsenal.

Check out my team of the week and then make your own selections towards the bottom of the article. 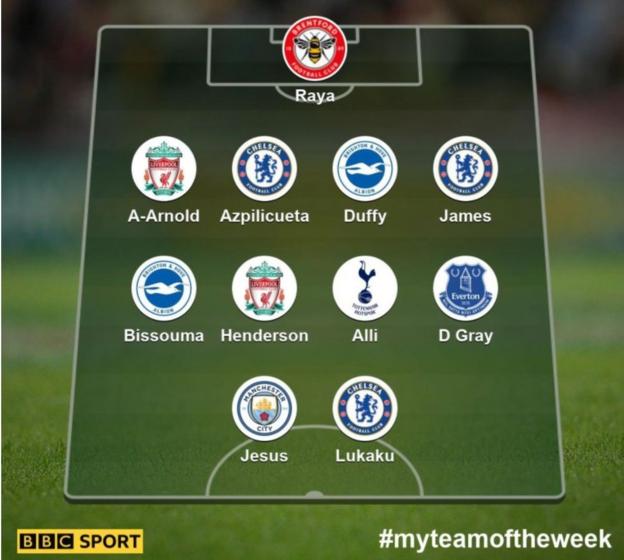 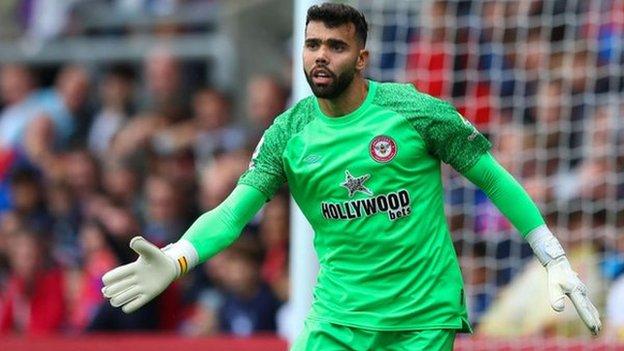 David Raya: There was no question about it. The moment the ball left James McArthur’s right foot it was destined for the back of the net and would have given Crystal Palace their first win of the season. Instead Raya produced what can only be described as a world-class save to keep the game goalless.

Three teams may have won promotion, but Brentford seem, at least on current form, to be the more likely to survive. Although I’m still not totally convinced.

At the moment the west London club are playing on euphoria, but that alone will not save them. They will need goals and lots of them. So far they have only played a dismal Arsenal and a very ordinary Palace side.

Did you know? Raya has kept a clean sheet in eight of his last 10 league games for Brentford (excluding play-offs). 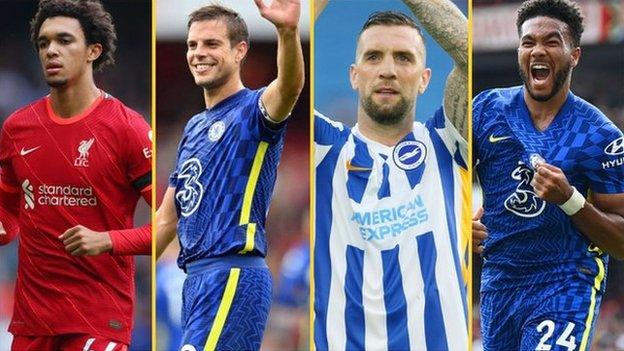 Trent Alexander-Arnold: I gave a moment’s thought to giving this spot to Tino Livramento for his Southampton home debut against Manchester United, but that would have been sentimental.

The 18-year-old’s performance was notable, but compared to that of Alexander-Arnold against Burnley, I really had little choice.

The Liverpool and England international didn’t just spray the ball around Anfield with extraordinary precision, but produced a simply exquisite ball for Sadio Mane to score Liverpool’s second goal. It’s been a long time since I’ve seen a full-back strike a ball so cleanly with both feet.

Did you know? Alexander-Arnold has provided nine assists for Mane in the Premier League, four more than he has for any other Liverpool player.

Cesar Azpilicueta: Chelsea are not Champions League winners by accident. Their performance against Arsenal was a gentle reminder to all concerned they have no intention of surrendering that trophy and have one eye firmly fixed on the Premier League as well.

In order to do that you need a leader and captain who is capable of keeping the players focused on the prize and Azpilicueta is that man. The Spaniard was outstanding against the Gunners – as he was for the best part of last season.

The greater the responsibility he has, the better he seems to play. Chelsea have arguably the best squad in the league and their mindset is very clear. They now want to be the best team.

Did you know? Azpilicueta made three tackles, one block and completed 93% of his passes against Arsenal.

Brighton have won both their opening fixtures and look a side who are improving in their second season under Graham Potter, who has become an expert at saying very little.

Did you know? Among central defenders, only Dunk and Liverpool’s Virgil van Dijk (both 10) have scored more Premier League goals than Duffy (7) since the start of the 2018-19 campaign.

Reece James: It was just as well Chelsea’s game at Arsenal wasn’t a heavyweight boxing contest. If it were, the referee would have stopped it – 2-0 flattered Arsenal. It could and should have been five.

Arsenal were taking so much punishment from Chelsea at one stage, I thought they did extremely well to finish without being completely embarrassed. James provided an assist for Romelu Lukaku’s goal and scored the second himself.

On this performance it’s quite inconceivable not to expect the Blues to be challenging for the title this season. As for James, this lad is no longer a player to make up the numbers for Chelsea or England.

Did you know? James is only the second Chelsea player to score and assist away from home against Arsenal in the Premier League, after Juan Mata in September 2012. 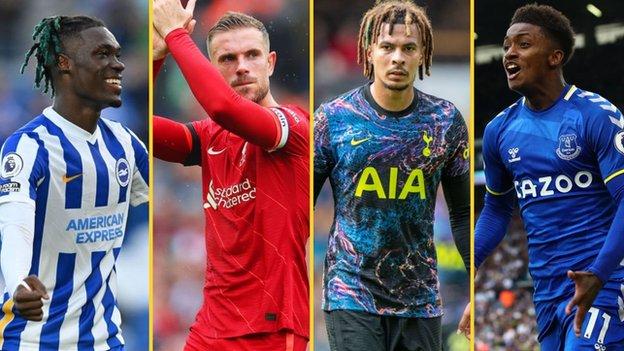 Yves Bissouma: I’ve had my eye on him for some time now and with every touch of the ball he seems to get better. I dare say he might have made my team of the week on more occasions had he been playing for a more fashionable side.

Brighton played some good football and so did Watford. However, the best player on the pitch was without doubt Bissouma. He’s 24, box to box, makes excellent interceptions and can see a pass.

He came to Brighton for an undisclosed fee which normally means he cost buttons. If he’s not worth upwards of £25m in the current market, I’ll eat my hat. Brighton will do well to hold on to him.

Did you know? No Brighton player registered more tackles (5) or interceptions (5) against Watford than Bissouma.

Jordan Henderson: Have Liverpool lost their mind? They have allowed Georginio Wijnaldum to leave Anfield and surely they can’t be contemplating the same thing happening with Henderson.

The Liverpool captain was back in the side against Burnley and dictating play in the middle of the park like Andre Previn used to conduct the London Symphony Orchestra. Henderson was at his commanding best.

As for Jurgen Klopp complaining about the game going back 10-15 years and calling on the Premier League to protect players by rethinking the rule changes, is he serious? The concern for the health and safety of players has never been higher.

Read more about why I think the game has become a non-contact sport in the Crooks of the Matter below.

Did you know? Henderson attempted (73) and completed (66) more passes against Burnley than any other Liverpool player.

Dele Alli: This was a game Spurs were lucky to win, but win it they did. The difference between the two sides was very simple. Alli can finish and Adama Traore can’t.

The Wolves winger has it all. Electric pace, tremendous power and, on occasions a touch of skill, but the most difficult thing to do on a football pitch is to put the ball in the net. Alli stepped up to score his first league goal in 17 months from the penalty spot, which takes courage and confidence.

This is the second consecutive week that Alli has started and finished a game for Spurs. I wonder if Nuno Espirito Santo has done what Jose Mourinho failed to achieve and found the player again? It normally works when you treat people nicely.

Did you know? Alli’s previous league goal was against Burnley in March 2020.

Demarai Gray: Leeds got what they deserved in the opening exchanges against Everton. I’m no fan of VAR, but referee Darren England’s use of the replay check, for the first goal when in doubt, was the right thing to do.

How Liam Cooper had the nerve to question his subsequent booking, never mind the penalty he gave away for pulling Dominic Calvert-Lewin’s shirt practically off his back, beggars belief.

As for Everton, I think they are very lucky to have got Rafa Benitez so soon as manager after losing Carlo Ancelotti. The Spaniard has brought in winger Gray, who looked electric against Leeds and is a real talent.

Did you know? Gray scored his first Premier League goal for Everton, becoming the 34th different player to score both for and against the Toffees in the competition. 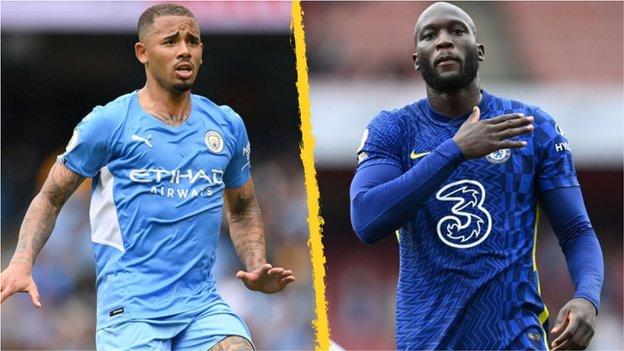 Gabriel Jesus: Playing against Manchester City having just lost to Spurs must be like being cornered by a tiger that hasn’t eaten for three days. That was the prospect facing Norwich who, at the moment, look like they are in a league they have no business being in.

Everyone seemed to accept that Gabriel Jesus was man of the match and I am inclined to agree. However, I cannot accept a coach, however good he might be, playing a world-class striker on the right of a three-man attack providing assists when he is perfectly capable of scoring goals himself.

If Jesus knows what’s good for him he should tell City to either buy Harry Kane and let me play alongside him so we can forge a partnership – or make me your main man. Short of that, I’m off.

Did you know? Jesus provided two assists in a single Premier League game for only the second time in his career, also doing so against Brighton in July 2020.

Romelu Lukaku: He has worked extremely hard for his success. Lukaku played for West Brom, Everton, Manchester United, Inter Milan and has now returned to Chelsea where it all started. The Belgium international has taken an awful lot of flak along the way.

However, what I see at this stage of his career is another Didier Drogba. I never thought I would be saying that when he was playing for United, but the player’s touch with his back to goal is better, and his all-round football contribution is much improved.

Arsenal couldn’t handle him, but if I were them I wouldn’t worry about that too much. Most other teams in the Premier League are going to have the same problem this season up against Lukaku.

The Crooks of the Matter

It would appear Jurgen Klopp and Ole Gunnar Solskjaer are up in arms about the rule changes this season which allow referees a certain leeway in their decision making. Officials have been encouraged to play on when physical contact occurs between players but is not necessarily a foul. Meanwhile, both managers believe the game is now in danger of becoming too physical.

When I saw the comments I thought it was a misprint. The game becoming too physical? The game is in danger of becoming hilarious.

Regular readers will know how frustrated I became about players who went to ground at the slightest touch. Most of which came about because of the false assumption that if contact was made in the first instance, then a foul had been committed.

This was not always true. Football has always been a contact sport. While no-one wants to see injuries, unfortunately it is an occupational hazard and sometimes unavoidable. Players must have the ability to compete fairly and honestly and not be penalised for merely competing, otherwise the contest becomes sanitised and sterile.

Football, like any elite sport, must be competitive and, on the rare occasions, the player may have to put his body on the line.