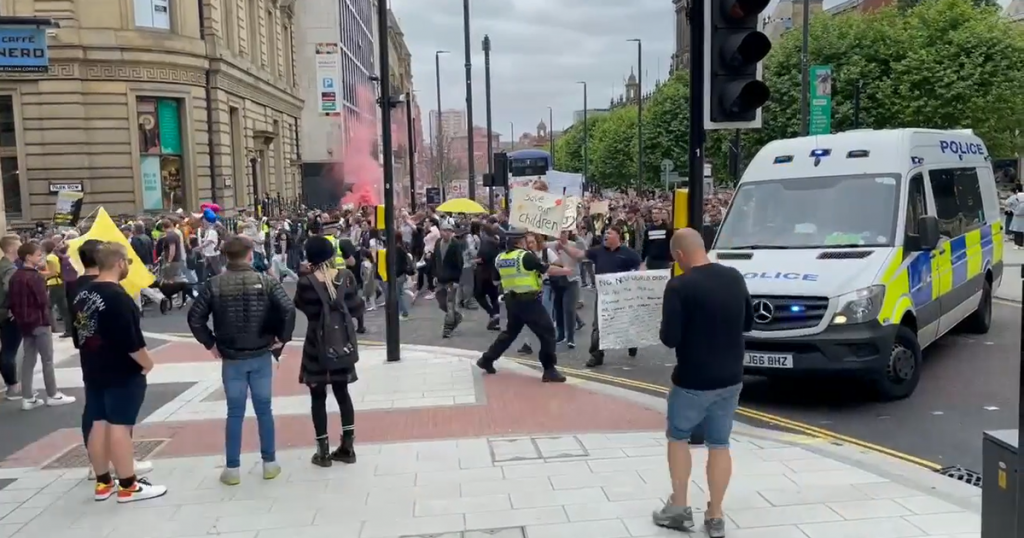 A ‘Freedom Rally’ in Leeds city centre this afternoon left roads and buses disrupted as anti-vaccine protestors swarmed the streets.

Demonstrators took to the streets in response to the government announcement that vaccine passports will be compulsory for entry to certain venues from the end of September.

Bus services First and Arriva reported that several of their routes in the city centre were delayed or cancelled by the protestors.

Arriva Yorkshire wasn’t able to run services on Boar Lane, Vicar Lane or Dark Arches for nearly two hours due to the rally.

Both Arriva and First have now reported their affected services are back to normal.

Protestors marched through the city centre, blocking roads and traffic, shouting for ‘freedom’.

Many were holding signs containing slogans such as ‘Free to party’, ‘Say no to the pricks’ and ‘Weapons of mass deception’.

The marchers ended by gathering in front of Leeds Town Hall, where several speakers used a megaphone to spread their message and sing anti-vaccine songs.

One unnamed speaker said: “We are critical thinkers. We are truth seekers, and we are spiritual warriors.

Dave Carrington, who received just 83 votes for Batley East at the council elections in May, told the crowd: “We were in London on Monday to see what was happening on the so-called Freedom Day. But I didn’t see any freedom.”

Speakers also accused the government of lying about the pandemic.

The protest was organised by a group of anti-mask activists who are sceptical about measures to curb the spread of coronavirus.

The government announced earlier in the week that vaccine passports would be needed by the end of September to access crowded venues such as nightclubs.

West Yorkshire hospitals are seeing a large influx of patients, and have pleaded with people to get the vaccine.