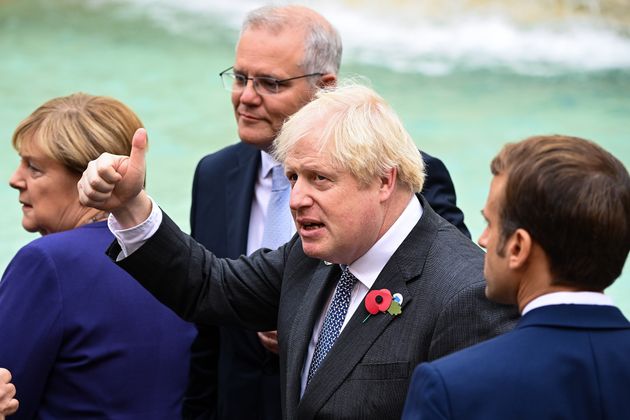 Johnson met the French president during a “brush-by” meeting on the sidelines of the G20 summit in Rome today.

Boris Johnson and Emmanuel Macron have failed to calm their fishing dispute at a meeting in Rome, with the prime minister urging France to “withdraw their threats” immediately.

Johnson and Macron failed to patch up their differences in an escalating fishing row despite both leaders coming under pressure to calm the situation that is aggravating both sides of the Channel.

The UK finds itself at loggerheads with France over fishing licences that culminated in the French seizing a British trawler and fining another during checks off of Le Havre on Thursday.

France, which claims the UK has not handed it the number of licences it is obliged to under the Brexit trade deal, has threatened to block British boats from ports and tighten border checks if the UK does not agree to issue more licences by Tuesday November 2.

It has also threatened to cut off energy supplies to Jersey and the UK in a move that would deepen fears around the existing energy crisis.

The PM’s official spokesman said Johnson made known his “deep concern” at recent threats by French ministers and “expressed his hope that the French government would de-escalate and withdraw their threats”.

“It will be for the French to decide if they want to step away from the threats they have made in recent days about breaching the Brexit [trade] agreement,” the spokesman added.

The row started after the French said dozens of applications by French vessels to fish in UK and Channel Islands waters were rejected — a claim recently denied by environment secretary George Eustice, who said the UK had granted France 98% of licences that had been applied for.

But France’s secretary of state fo European affairs, Clement Beaune, said more than 40% of French “detailed requests” had not been actioned and reiterated the willingness to use retaliatory measures.

Beaune said on Twitter: “We do not lack just a few licences, but more than 40% of French detailed requests.

“For the EU as a whole, around 90% of the expected licences have been granted, but all the missing ones are French.

“After 10 months, when such a significant amount of licences, targeting one country, is missing, it’s not a technical issue, it’s a political choice and a breach of the TCA [Trade and Co-operation Agreement].”

He added: “A friend, ally and responsible partner should stand by its word and comply with legal commitments.

“This is why France asks for action at the EU level, within the framework of the TCA, and stands ready to implement proportionate and reversible measures from November 2, as we have announced repeatedly since last April. These measures are fully in line with the TCA.”

On Saturday French prime minister Jean Castex wrote to European Commission president Ursula von der Leyen urging her to ramp up the EU’s opposition to Britain in order to make the point that leaving the bloc was more damaging than remaining in it.

In the letter, obtained by Politico, Castex warned that the EU’s credibility risked being harmed by the UK’s refusal to meet French demands.

Meanwhile, Johnson did not rule out taking legal action against France in the event the dispute was not resolved.

“If one of our partners decides to breach the Trade and Cooperation agreement we struck then obviously that’s a matter we’ll have to pursue,” he said, adding that he wouldn’t rule out triggering the dispute mechanism under the deal to try and resolve the issue.

“Of course not I don’t rule that out,” Johnson told Sky News.

“But what I think everybody wants to see it cooperation between the European allies and Emmanuel Macron.”