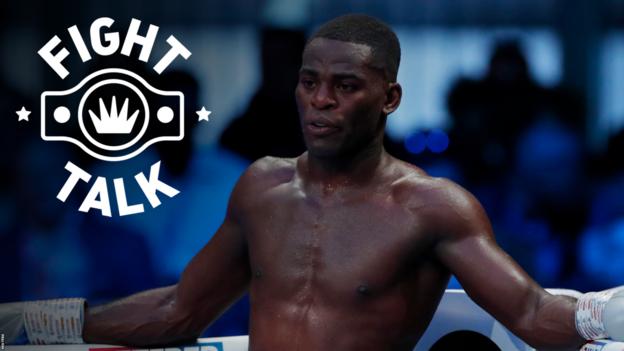 Is Joshua Buatsi Great Britain’s next global star or does he have some domestic dust-ups to settle first? Are we finally going to see Amir Khan and Kell Brook finally face each other?

What does the boxing world make of David Haye’s comeback? And is YouTuber Logan Paul living in dreamland?

‘The real deal’ – what’s next for Buatsi?

The British light-heavyweight division is booming, and on Saturday night Joshua Buatsi staked his claim to being the best of the bunch with a clinical 11th-round knockout win over Ricards Bolotniks.

Unbeaten Buatsi, a 2016 Olympic bronze medallist, didn’t have it all his own way against the experienced Latvian, but once again he finished off an opponent in style.

He now has 13 stoppages from 15 wins as a professional. It was a performance which impressed these current and former fighters…

Amateur pedigree, knockout power and learning from the best – Buatsi seems to have everything going for him.

He also comes across humble and classy out of the ring – when being interviewed by BBC Radio 5 Live after his win, his priority was to first congratulate co-commentator Ben Whittaker on winning an Olympic silver medal in Tokyo…

Buatsi is now on the brink of a world-title shot, with Matchroom promoter Eddie Hearn suggesting a mouth-watering clash against Russia’s WBA ‘super’ champion Dmitry Bivol could take place in the UK in February 2022.

World honours would catapult Buatsi to boxing stardom, but some fans don’t believe the 28-year-old – who has only fought three times in the past two years – is quite ready for the challenge at that level.

Instead, they’d like to see him in with some of the other British contenders, with the likes of Anthony Yarde, Lyndon Arthur, Callum Johnson and Callum Smith all operating in the 175lb weight class…

Kell Brook v Amir Khan – the one that got away?

It’s a fight that should have been made back in 2015 when both fighters were at their peak. In fact, the pair had been trading words long before that.

The bout could well have sold out a stadium but, whether it’s down to boxing politics or egos, it never materialised.

Brook, 35, and Khan, 34, now have eight losses between them and are nearing retirement, but it remarkably seems the clash is now closer to being made than ever before.

Khan then said on Instagram that he would “put Kell in his place”, to which Brook replied…

When will it happen? Well, promoter Eddie Hearn told Behind The Gloves that although he may not promote the fight, he does think it could take place later this year.

“It’s still a big fight, not what it once was, let’s be honest, but it’s still an intriguing fight,” Hearn said.

The sport of boxing never ceases to surprise you.

This week former cruiserweight and heavyweight world champion David Haye announced he was making a comeback three years on from retiring… to take on his mate.

Haye, 40, will be fighting entrepreneur Joe Fournier at Staples Centre in Los Angeles on 11 September.

How did the boxing world react?

Speaking to IFL TV, he warned Fournier: “If David hits you – the last thing you lose is your power, so be very careful what you wish for – that guy’s uppercut hurts.”

Meanwhile promoter Eddie Hearn described it as a “freak show.”

“You can’t help but say to Joe Fournier and David Haye, how did you manage to get someone to pay for that?” Hearn told Boxing Social.

They say you should never look past your next opponent but YouTuber-turned-boxer Jake Paul – who takes on former UFC star Tyron Woodley on 29 August – has already set his sights on his next 10 (yes, ten!) opponents.

Paul’s venture into boxing tends to frustrate the traditionalists with many feeling it cheapens the sport, while others see it as an opportunity to welcome new and younger fans.

Among the names on his hit list are arguably the greatest fighter in boxing today, Saul ‘Canelo’ Alvarez, Love Island star Tommy Fury (or ‘Timmy’ as Paul puts it) and Irish UFC superstar Conor McGregor.

Not even his own sibling, Logan Paul, is off limits…

The debate on whether social media stars turning to boxing is good for the sport or not will go on, but it’s fair to say Paul is mastering the art of self-promotion.