Thanks to the newly normalised culture of remote work, Facebook on Thursday launched a test of Horizon Workrooms, a virtual reality workplace app in which users of the company’s Oculus Quest 2 headsets can hold meetings as cartoonish and creepily legless avatar versions of themselves. 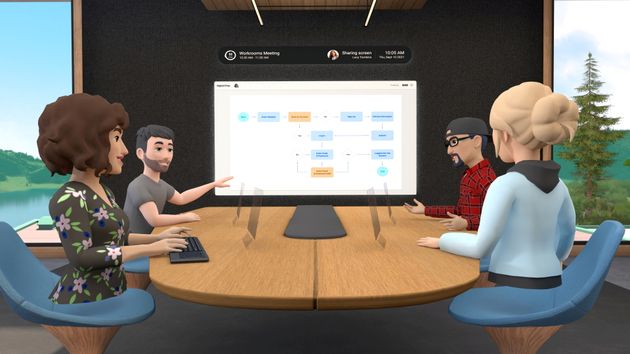 The app also allows workers to collaborate with others using a whiteboard, stream what’s on their laptops and use their hands instead of remote controllers, among other features, according to Facebook’s corporate website.

“We shouldn’t really have to physically be together to feel present, collaborate or brainstorm,” Zuckerberg said during a demo of the app for journalists, according to CNET, which was present for the demo and reviewed the app on its YouTube channel.

The app is part of the CEO’s vision of turning Facebook into a “metaverse,” a Silicon Valley buzzword that Zuckerberg described to The New Yorker earlier this month as “a virtual environment where you can be present with people in digital spaces.”

It’s “an embodied Internet that you’re inside of rather than just looking at,” he told the magazine, adding that he believes the “metaverse” will be “the successor to the mobile Internet.”

Despite Zuckerberg’s high hopes for the app, people on Twitter weren’t thrilled about the tech tycoon’s idea of making virtual work meetings even more awkward – and rather nightmarish-looking – given workers’ various levels of competence with technology (hello, lawyer who got stuck in kitten mode on Zoom).

Mark Zuckerberg: I made an app that combines the worst parts of working from home and working in the office. YOU’RE WELCOME. https://t.co/WEgd9f707u

THE WORLD: Do a better job reining in misinformation and extremism on Facebook.

Mark Zuckerberg: Here’s more tech to have a meeting that should have been an email. https://t.co/irfN6gVUaj

MARK ZUCKERBERG: What if we made Zoom…suck worse?

FACEBOOK LIEUTENANTS: Sir, it’s not possible. It can’t be done

ZUCK [grinning devilishly]: That’s where you’re wrong. Get me my space helmet

Personally I think it’s cool Mark Zuckerberg invented a way for his coworkers to punch him in the face without getting in trouble https://t.co/ETrZBdlFP5

V funny to me that everyone is like “we have zoom fatigue!” and Facebook was like “ok strap this computer to your face and step into the metaverse, baby!”

Mark Zuckerberg is coming to take the best thing about working at home during the pandemic away from you, because he is a hateful, soulless cyborg. https://t.co/EGT5oW1uMO