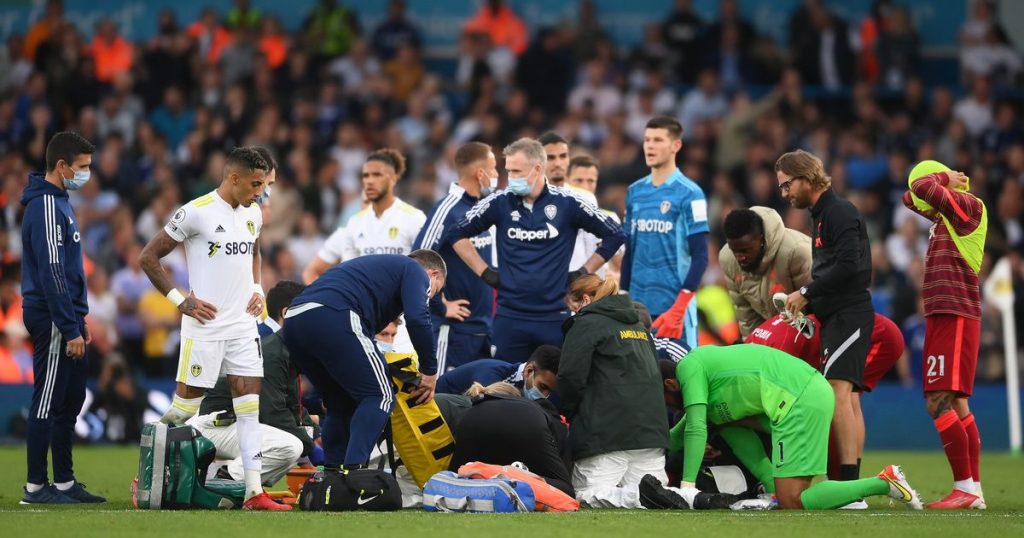 Leeds United were defeated by three goals to nil at home to Premier League contenders Liverpool on Sunday afternoon.

The Whites started strongly but failed to capitalise on Liverpool’s laboured beginning to proceedings.

As a consequence, the Reds grew into the game, gaining a strong foothold, eventually opening the scoring through a well-choreographed move down the right-hand side.

Jurgen Klopp’s men added a second shortly after the break following a penalty box scramble, which culminated in Fabinho finding the net.

Pascal Struijk – who had replaced injured Diego Llorente in the first half – then saw red for a strong challenge on Harvey Elliott beyond the hour mark.

From there, Leeds still probed but were lacking in quality throughout the final third.

After a flurry of chances fell his way, Sadio Mane finally converted and gave Liverpool their third and final goal in stoppage time at the end of the second half.

Here is Marcelo Bielsa’s immediate reaction to the three-nil defeat with every word he had to say on the game, Struijk’s red card as well as injuries to Diego Llorente and Adam Forshaw.

It appeared your team played better in the second half – the first half appeared to be a real struggle – why was that?

Evidently the way I planned the game, did not allow our forwards to shine and the opposite happened with what the opposition manager planned. They managed to get their forwards into the game to create danger and chances. In the first half every time we lost the ball, the opponents created danger but we did have some balls in the first half which we thought would have created more danger or risk for the opponent.

I‘m sure that both teams planned to play, or Klopp decided, and what I decided. What he planned for facilitated the unbalance of his forwards – and what I chose didn’t allow our very good forwards to create danger, unbalance and shine in the game.

In the second half it’s not that we played better but the goal they scored quickly and the sending off, it made us drop back and with the rush not to concede more danger, we were more prudent, but we attacked very sporadically.

Obviously we hope Harvey Elliott recovers – what were your thoughts on the Struijk tackle?

I’m totally sure that there was no bad intention. I don’t know how to qualify it because any negative qualifier would be hard to say, but obviously there was some imprudence or an excess of power. These types of recoveries of the ball are totally frequent. The difference here was that the follow-through with Pascal’s speed and power hit the opponent and this caused an injury. I regret dearly that such a young player playing at a high level has been interrupted by this. I hope he is able to get back.

Would you consider appealing the red card, given what you’ve said?

What decisions would you change to create more danger?

I don’t think it was difficult to attack them in the first half, ‘cos there were some very advantageous situations but when you lose the ball, before you finalise an action, first of all it decreases the amount of attacks and also what conditioned [the] first half was what would happen after we’d lost the ball.

Two things happened to us that if you put them together complicate the performance of a team: losing the ball before finalising the attack and that these losses, the opponent could take the ball and create advantageous situations for themselves. That’s why I said what Klopp planned favoured his forwards shining and what I proposed didn’t give the same options to our men.

Could you update us on Diego Llorente and Adam Forshaw?

Llorente has a muscular problem, the severity I don’t know. Forshaw suffered a muscular issue and he is recovering himself.

What were you talking to James Milner about before the game?

Today what did you make of Stuart Dallas and Rodrigo’s partnership in the middle. Did they offer enough control or struggle against Liverpool’s midfield three?

How satisfied have you been with the general performance level of his team over these first four games?

What I’m unsatisfied with is my own performance. Against two opponents like Man Utd and Liverpool we were too far away to be able to compete on equal conditions. Today we lost by a three goal difference, against Man Utd by four – the results were fair. I obviously can’t be satisfied with the way I managed these games.

Which team do you think is stronger out of Manchester United and Liverpool?

It’s far too soon to be able to say that.