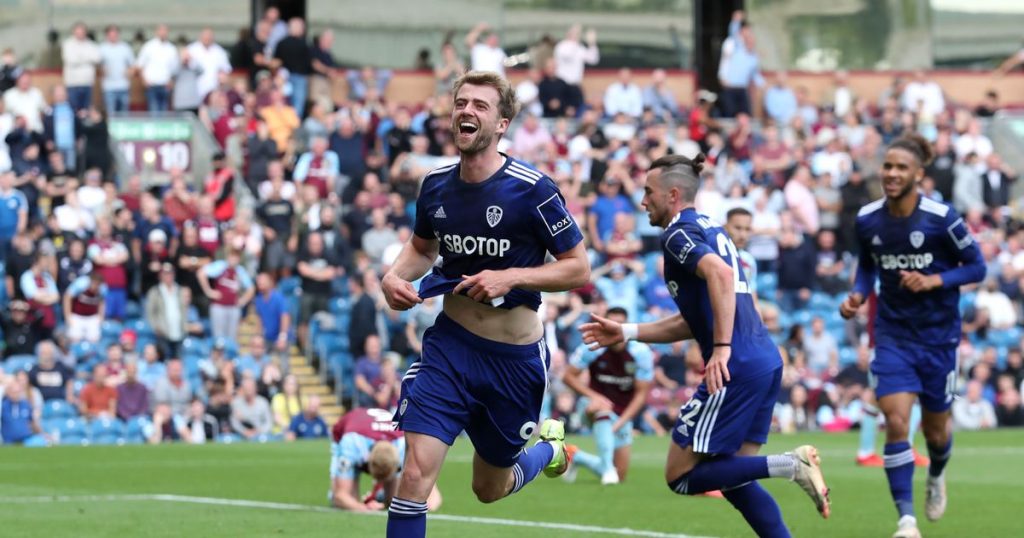 Marcelo Bielsa witnessed his Leeds United side huff and puff as the physical threat of Burnley challenged his Whites players throughout today’s 90-minute affair at Turf Moor.

Both sets of supporters were in fine voice, which contributed to an embittered display on the pitch.

Patrick Bamford found himself engaged in individual battles with James Tarkowski and Ben Mee from the first whistle, while Diego Llorente in particular was targeted by Burnley strikers Chris Wood and Ashley Barnes.

The Whites went in level at the break after a difficult first 45 minutes, where neither side created too many clear-cut opportunities but threatened in flashes.

Chris Wood’s slight touch on Matt Lowton’s goalbound effort on the hour mark wrongfooted Illan Meslier to give the hosts the lead in what had been up to that point a tight encounter.

But, in the final throes of the game Patrick Bamford levelled with a similarly deft effort of his own.

The striker who had been subjected to harsh treatment from Burnley’s centre-backs and some unsavoury chanting from the home supporters, cupped his ear to the stands as he wheeled away in celebration, ensuring another point on the board for Leeds United.

After the game Marcelo Bielsa spoke to the media, giving his verdict on proceedings.

Here is every word the Whites boss had to say on Burnley 1-1 Leeds United.

What made Burnley hard to break down today?

The game apart from two segments in the middle of each half, we managed to manage it. The situations we created at goal were a lot but for them as well. The difference is that for us to play well we need our creative players to be on top of their game – and in the case of our opponent today, [they were] similar to Everton, but today in a more marked way. They had three resources that were important, the capacity to force errors through their two CFs, the management of the set-pieces and they have a very distinct style of play. Their style of play means it doesn’t demand that their players shine. This is something of value when you’re describing a team.

Marcelo did you feel your side gave away possession more frequently today which invited more pressure?

The same thing that you said, you can say in another way. In the virtues that I mentioned of Burnley, they provoked errors and took advantage of them. We say the same thing but in a different manner. You link that more to something bad that we did rather than the virtues of our opponent. Perhaps you’re right but perhaps your judgement rather than mine, is taking away [inaudible] but it’s something that’s very true. A lot of the chances at goal that are created through that aspect, it doesn’t come from their creative play, it comes from being facilitated for them. For our game, the opposite happened. We need to be on top of our game to attack well but at the same time the styles, it has their risks to have so much time on the ball. If you look for example the amount of touches our players had on the ball, you will see they had double the touches of the opponent’s players in the same position.

That increases the chances of making mistakes. It favours the opponent if they want to recover the ball from us.

How disruptive were the Covid results for Klich and Firpo? Was that a very late call?

They were going to play but we always have two players in each position ready to play. If Firpo doesn’t play then Dallas does, it’s a substitution of a similar level and the same [for] Klich in respect to Tyler and Rodrigo

Did you fear for the players’ safety at all during that game?

No, I thought it was a very heated game but not any more than that.

Have you spoken to Patrick about what a great week it’s been for him?

No I’ve just congratulated him on the club extending his contract, it’s something that they did right – but I think also on his part to be called up to the national team is something very important and very deserved.

Do you plan to do any more strengthening in the transfer window?

I don’t know the reality of this.