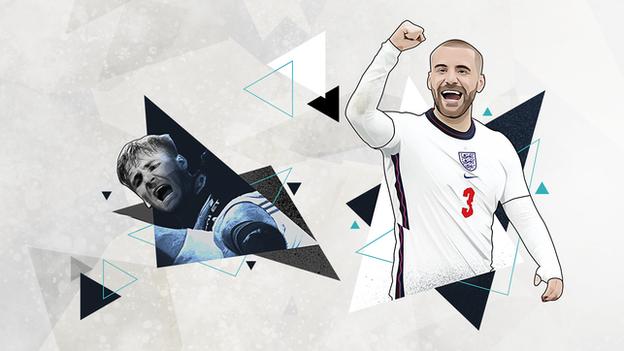 It says a lot about the career trajectory of Luke Shaw that when I asked someone who knows him well whether they thought in January the Manchester United defender would make Gareth Southgate’s Euro 2020 squad, the answer came back: ‘I was still nervous for him in June’.

The comment was semi-light-hearted. The 25-year-old had already been selected in an expanded 33-man squad as Southgate wrestled with the demands of European finals – one of which Shaw played in – and injuries.

And while the example of Liverpool defender Trent Alexander-Arnold’s injury proved not even making the 26-man cut on 1 June could guarantee a ride on the joy-filled bus that threatens to transport England to their first tournament triumph since 1966, by that time Shaw had done enough.

What has happened since has been a testament to the volte-face Shaw’s career has undergone.

Among many outstanding contributions to the overall team effort in England’s Euro 2020 campaign, Shaw’s is, perhaps, the most remarkable.

Of numerous statistics concerning the full-back, one little nugget stands out. Shaw has provided more assists (three) in the past two England games than he did in the Premier League in two-and-a-half years under Jose Mourinho (two).

And given the history between the pair, that feels very significant indeed.

Time to move on?

Among numerous conversations about Shaw for this article, one person from the player’s camp was the most strident: “It is about time we stopped talking about what happened in the past and think about what we have now.”

Inevitably, the response was to a question about Mourinho.

Yet it is hard to get a true perspective on where Shaw is now without reflecting back to the position he has come from.

The thing is, Mourinho was not even the first United manager to deliver harsh words to Shaw.

Louis van Gaal was only in his company for two weeks before deciding Shaw ‘was not fit enough’.

The Dutchman’s words were delivered during a pre-season tour of the United States in 2014, not even two months after Shaw had become the second-youngest player to be selected in any of the 32 squads for that summer’s World Cup and, at the time, the 12th-youngest player to win a full England cap and youngest to play in a major tournament game, the 0-0 draw with Costa Rica in Belo Horizonte.

Looking back, Van Gaal’s assessment of the situation is now accepted, namely Shaw was still a little immature and his focus and dedication were not at the standard required. The Dutchman was emphasising this and also providing a timely reminder that if, at 18, Shaw thought he had made it, he was wrong.

As it turned out, Van Gaal would never get the chance to see how good he could have made the youngster, who United paid Southampton £27m for to make him the fourth most expensive defender ever.

A horrific double leg-break sustained against PSV Eindhoven in September 2015 proved to be the last time Shaw would play under Van Gaal. By the time he recovered, Mourinho had moved into the Old Trafford hotseat.

When critics of Manchester United manager Ole Gunnar Solskjaer ask which players he has improved during his two-and-a-half years at Old Trafford, Shaw is the shining light.

It is acknowledged that, along with his family, his advisors and – in November 2019 – the birth of his son, Solskjaer has been one of the key figures in Shaw’s development.

Numerous sources have said Shaw – an unassuming character, according to one – responds best to support, encouragement and an arm around the shoulder. This is what he gets from Solskjaer. He certainly did not from Mourinho.

Shaw reflected on the situation earlier in the tournament.

“He continually talks about me, which I find quite strange,” he said. “Even some of the lads have said ‘what’s his problem?'”

It is not entirely clear what core issue Mourinho has with Shaw. It is possible Mourinho felt slighted that Shaw, a childhood Chelsea fan, chose to join United instead of moving to Stamford Bridge in 2014 at a point when he was the manager.

It could be that he genuinely identified flaws in his game that needed addressing on a regular basis.

Whatever the reason, it is fair to say Mourinho made life for Shaw exceptionally difficult, from the moment he said this after a 25-minute appearance off the bench in a 1-1 draw with Everton in April 2017.

“His performance was good. But it was his body and my brain. He was in front of me and I was making every decision for him, when to go inside, when to press the opponent. If he was on the other side, he wouldn’t be the same and that is not possible at this level. He has to grow up. He has to mature. He has to understand the game better. He must accelerate the process because at 21 years of age, he is old enough to have a better understanding of the game.”

If that was a single broadside, it may have been acceptable.

It is acknowledged by some that Shaw’s levels of professionalism at that time were not high enough. He struggled to keep his liking for sweets, crisps, biscuits and fizzy drinks in check. One picture taken of him on holiday in Ibiza in June 2018 was particularly unflattering.

But in different ways, Mourinho maintained the offensive even when it was clear Shaw was more dedicated, to the extent when a friend playfully tapped his torso, it was said to be like knocking a mahogany table.

The comments hurt Shaw deeply, even though he tried not to let them bother him. He was advised to stay off social media, although on the occasions he ignored this, unkind comments from people who had barely seen him play, let alone met him, were not hard to find.

Out of the shadows

By the time Mourinho was sacked in December 2018, Shaw had eight England caps, playing just five times in four-and-a-half years.

Part of this was down to injury – and the bad luck Shaw feels he has experienced.

During his time at the club, United have reached five major finals. This season’s Europa League final defeat by Villarreal in Gdansk was the first occasion he was fit enough to play. He also missed the 2020 ‘Super Eights’ Europa League competition with an ankle injury.

These absences may explain why Shaw has struggled to do justice to the high hopes expressed for him when he moved north from Southampton.

There is no doubt he is responding to being pushed by Solskjaer and his coaches at United. The physical demands placed on the full-backs have increased markedly. The arrival of Aaron Wan-Bissaka to play at right-back in 2019 and Alex Telles to provide genuine competition on the left has helped sharpen Shaw’s mind.

The feeling is he is working far harder in his preparation and now has the understanding Mourinho felt he lacked in terms of what the effect of his training programme has on a matchday.

That has been abundantly clear at Euro 2020, where he has been a part of a team which is yet to concede a goal in any of its five games. But he has helped achieve that while also being his side’s most creative force – no England player has more assists and he has set up twice as many chances (eight) as any other member of the squad.

It has been a lengthy process and Southgate has kept across his progress, even if that was not always obvious given he was not even picked in an England squad for two years from March 2019. Southgate, it should be remembered, was the man who gave Shaw his England Under-21 debut and selected him for a game against Germany right before Mourinho’s cutting post-Everton jibe, even though the defender had started just two Premier League games in six months.

But he needed convincing. This season alone, Kieran Trippier, Bukayo Saka, Ainsley Maitland-Niles and Ben Chilwell all played in left-sided defensive positions during eight autumn internationals, with Shaw not in any of those squads.

In November, he could not have imagined Roberto Carlos would have been in touch, as the legendary Brazilian was after he became aware of the ‘Shaw-berto’ moniker he has been given due to his attacking exploits against Ukraine at the weekend.

“I couldn’t believe it when he commented,” Shaw told BBC Sport. “I sent it straight to my family.

“It is all a bit of banter really. I just laugh it off. But the recognition is nice, especially when it comes from a legend like him.”

Maybe it is time Shaw was allowed to move on, from injuries, setbacks and Mourinho, and be appreciated for what he is and what he could be – the second Englishman to play at left-back in a major tournament final since 1966 hero Ray Wilson.

“I have loved every minute of this camp,” he said. “You can see how much I have been smiling. I don’t want to go home yet, that’s for sure.”