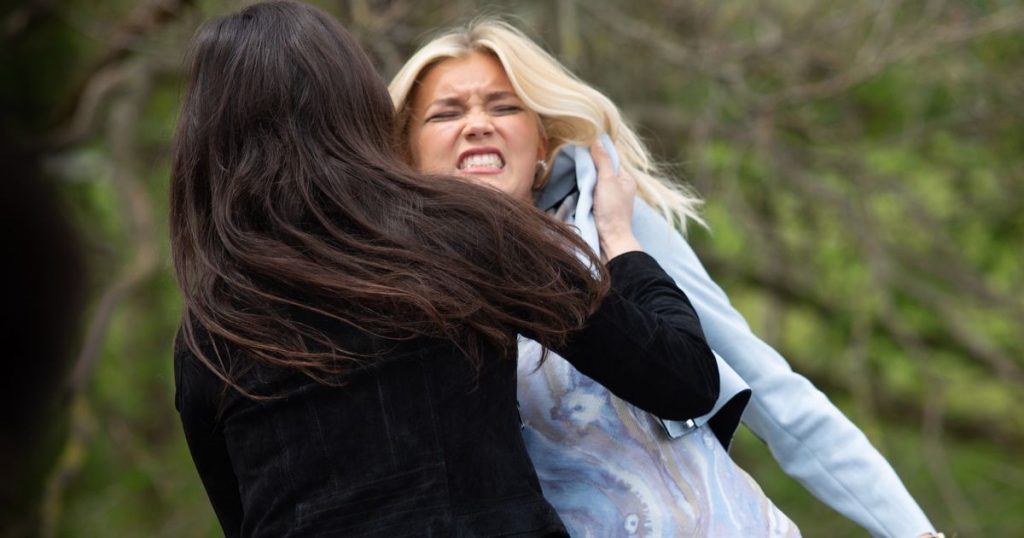 Emmerdale’s Leanna Cavanagh met her demise in tonight’s episode of the ITV soap at the hand of the manipulative and murderous Meena Jutla.

Meena, is quickly becoming one the village’s most evil villain’s of all time after initially appearing to be sweet and innocent.

Multiple fan favourites have been at risk of the chop all week as viewers have watched on as Meena’s behaviour became increasingly erratic.

The supervillian is willing to do anything to keep her man, David Metcalfe, and get him all to herself but with numerous people getting in her way – aka son Jacob and former flame Victoria Sugden – it was bound to end in disaster.

In shocking and emotional scenes, Leanna Cavanagh died this evening. We’ve caught up with actress, Mimi Slinger, to discuss her exit from the ITV soap and her plans for the future.

Leanna met her untimely demise tonight are you glad the secret is now out?

“I am glad that the secret is out – I knew back in December that Leanna would meet an untimely death but I wasn’t told any other details until just before the scripts were published.

“It has been hard not to let on to anyone. I am sad to be leaving the Emmerdale family on one hand but so excited by what may be in store in the future- I am so excited by the storyline and the opportunity that I have been given to bring some drama to the Dales.”

Was it hard to keep a secret?

“It has been so difficult to keep the secret – of my decision to leave Emmerdale to pursue other opportunities, but also the secret of my demise. I am quite good at keeping secrets generally but this has been particularly tricky because so many people do ask me frequently about my plans for the future.”

How did you react when you heard what Leanna’s fate would be?

“I had taken the decision to leave the Dales and I was so looking forward to hearing how the producers were going to engineer my exit. When Jane Hudson told me about my storyline, I have to say that I was shocked but so excited to be given the opportunity to be challenged and show my acting abilities. Of course, it is a very sad storyline and has been very emotional for me!”

How much have you enjoyed playing Leanna?

“I have absolutely loved playing Leanna. I can’t believe it’s been 3 and a half years – it has flown by! I have had the most amazing experiences and have learnt so much from some incredibly talented actors, directors and producers.”

“I really enjoyed filming the scenes – those with my on-screen father, Jonny, were incredibly emotional. There were lots of tears but I actually enjoyed having the opportunity to challenge myself. The scenes with Meena, played by Paige were emotional and dramatic at the same time. Paige is great at playing a bit of a psycho – it was actually quite scary!”

Did you have to do any stunts?

“I did have to do a few stunts in order to film my exit which I seriously enjoyed! There was a stunt coordinator on set who was fantastic at guiding Paige and I. As I am pushed off the bridge to my death, falling 40 ft, that was going to be a bit too much of a challenge – a stunt double was used for that bit!”

Are you going to miss working so closely with Jonny and your fellow cast members?

“I am going to miss my Emmerdale family so much! Actually, I am missing them already! I filmed my final scenes at the end of May, so it feels like quite a while since I last saw them. It is emotional to watch the build up to the storyline.

“Jonny has taught me so much and I am so fortunate to have had the opportunity to work with him and Roxy, as well as others. I have built some amazing friendships, for example with Daisy (Amelia) and Rosie (Gabby). I know that, even though I am moving on, my friendships are here to stay.”

What will you miss the most about working at Emmerdale?

“I will miss the community more than anything. Everyone is so friendly and it has been such a fantastic few years. I do feel that it is time for me to move on and pursue other opportunities.”

“My last day on set was unplanned. We had to abandon filming in the village for my final scene from the previous week, due to torrential rain. I was called in (on my father’s birthday) to film and it was extremely emotional.

“My last scene was actually the last scene that will air on tv of me, which of course added to the many emotions I felt that day. I must say that I had shed many tears as I had read the scripts – it’s certainly strange to read about your death in advance!

“As soon as we wrapped, Paul Copeland, the fantastic director of these episodes, made a speech and I was given some gifts by the amazing production team. My dad (Jonny) and Jacob (Joe Warren Plant) were filming in the village that day too, so I got to say a final goodbye to them.”

What’s next for Mimi?

“Well, this industry is very uncertain! I am very keen to pursue other acting opportunities. Fingers crossed for anything in the pipeline. I definitely want to keep acting, I absolutely love it and can’t see myself not doing it!

“I would love to do something with my music too, as I am a singer and songwriter. I have also recently started modelling and have already done some fantastic, fun jobs. I do love it and am learning a lot.”

How do you think Jacob and her dad are going to cope in the aftermath of her death?

“Goodness… well, I can’t imagine the pain that Liam will feel after Leanna’s death. It must be completely devastating to lose a child – it’s not the way it should be.

“Poor Liam has already lost Leanna’s mother, and has experienced huge amounts of grief. He and Leanna were so close… I do hope that he manages to cope… Jacob and Leanna have certainly had their struggles but there seems to be something very special between them.

“I think that he will be deeply affected. Jacob has had a complicated life with many unconventional relationships – let’s hope he can find a way to cope.”