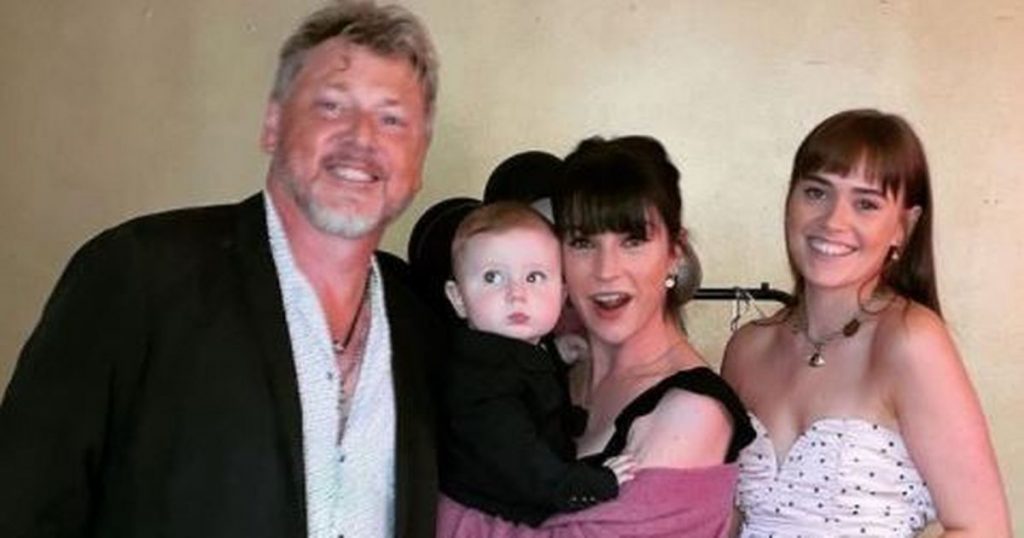 Former Emmerdale actor, Mark Jordon, has shared a rare snap of his unseen daughter, Poppy, with his new baby, Jesse, who he shares with co-star Laura Norton.

The soap star, joined the cast of Emmerdale in the short term role of Daz Spencer. He reprised the role in August 2017, becoming a regular cast member, until Daz was written out on 31 January 2019.

Mark, who is best known for his portrayal of cafe waiter Daz in the ITV soap, shared the private family photo to mark his daughter’s 21st birthday, The Mirror reports.

You can find out the latest Emmerdale news by visiting our homepage dedicated to the ITV soap.

Mark’s now partner and former co-star Laura Norton, who plays Kerry Wyatt, can be seen holding baby Jesse as she smiles alongside Mark and his daughter Poppy for the family snap.

The proud dad said his daughter Poppy was “a credit to him.”

Poppy posed for the camera as she worse a monochrome polka dot dress, Mark looked proud as punch as he showed off his beautiful family.

The actor wrote a touching post for his daughter to mark the monumental coming of age.

He captioned the post: “My incredible daughter is 21 her love of her new brother is emotionally inspired.

“My thanks for the beautiful friendship she’s formed with my love @laura_norts is beautiful.

“Every second of every day I value the gift I’ve be given to be named Dad to Poppy Jordon.”

The adorable post was met with a flurry of support from Mark’s co-stars with actress Fiona Wade posting: “Beautiful family!! Happiest birthday Poppy can’t believe your 21!! Gorgeous girl have the best day! Love you all.”

Laura and Mark, who met on the set of Emmerdale, announced in August last year that they were expecting their first child together.

Laura told OK! magazine : “I had tears in my eyes, we’re over the moon!”

Mark added: “In my heart I knew before looking at the test.

“We both looked at the result and there was so much joy, but for a weird moment we were both deadly silent.”

The Emmerdale stars announced their happy news on Instagram along with several adorable snaps of their bundle of joy.

Laura, 38, captioned the post: “So, on Friday Jan 29th at 1.30am we managed to bring this little champ into the world.

“It was the most incredible, surreal experience I have ever had and probably ever will and my tiny mind is blown.

“He is perfect and we’re all so happy to welcome him to the fam.

Laura and Mark announcedtheir engagement at the start of last year.

In July 2018, Mark was accused of assaulting Andrew Potts by biting him on the face outside the Farrars Arms pub in Oldham.

The TV star denied charges of affray, unlawful wounding and assault by beating and was cleared by a jury in August.

Following the trial, the couple resumed planning their wedding before they discovered their surprise baby news.

“I hope my instincts kick in. I feel very calm and safe knowing that I’ve seen what an amazing father Mark and how brilliant his kids are.