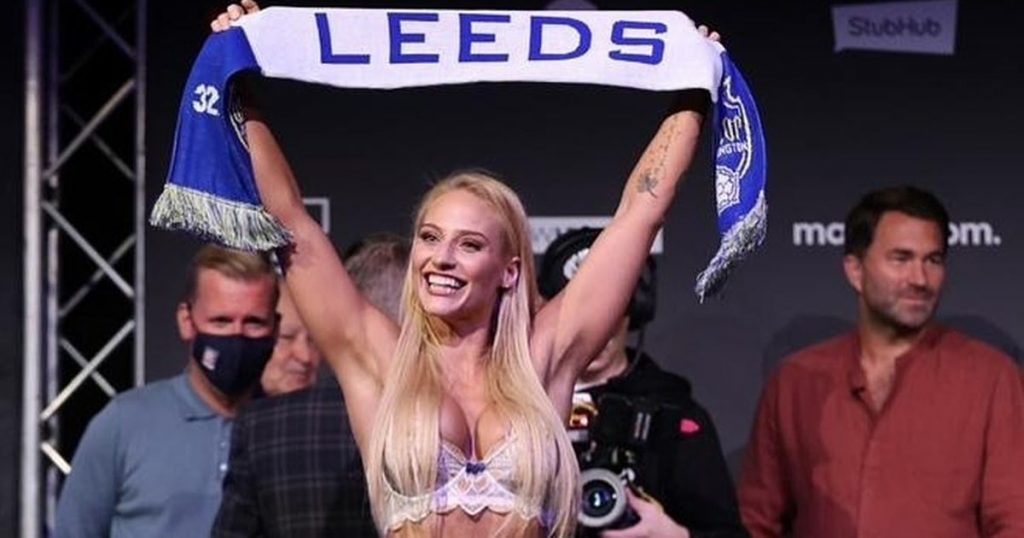 She’s the star boxer who’s taking the sporting world by storm – and now Ebanie Bridges is catching attention in Leeds city centre too.

Known as the ‘Blonde Bomber’, Ebanie Bridges bust onto the boxing scene in April when she appeared for the weigh-in for her WBA bantamweight title fight against Shannon Courtenay wearing very revealing lacey lingerie.

And Ebanie’s social media account reveals she’s a huge fan of Leeds United, having turned up at Elland Road in this season’s kit ahead of her fight in Leeds as undercard to Josh Warrington.

She posted after the fight: “Thank you Leeds. What amazing experience. Thank you for all the love and reception last night.

“Got the win last night and like usual having to fight through adversity.

“Busted right hand from the 2nd that just got worse and worse. But it wouldn’t be a Blonde Bomber fight without some drama/injury right?”

Today the Blonde Bomber turned up at The Brotherhood in Leeds where she was quickly propositioned.

She posted a photo from inside the bar on Sunday afternoon with the caption ‘where am I?’.

The bar, which is adorned with photos and canvas prints of various boxing legends, quickly replied.

A post from the bar themselves said: “Good choice, think we need to get a new canvas up.”

Following her fourth professional fight – a win against Crystal Hoy in America – Bridges posed in the club’s famous white shirt while “Glory, Glory Leeds United” is dubbed over the top.

While training for he first Matchroom right against Bec Connolly, Bridges then donned a shirt for training with the club’s logo and “Never underestimate a women who supports Leeds”.

And she has previously treated her 250,000 Instagram followers to a snap of her boxing fit figure in full Leeds kit showing her support for Raphinha, too.

The qualified maths teacher from Australia amassed a 26–4 amateur record from 2016 to 2018, during which she won the 2016 and 2017 National Golden Gloves titles,