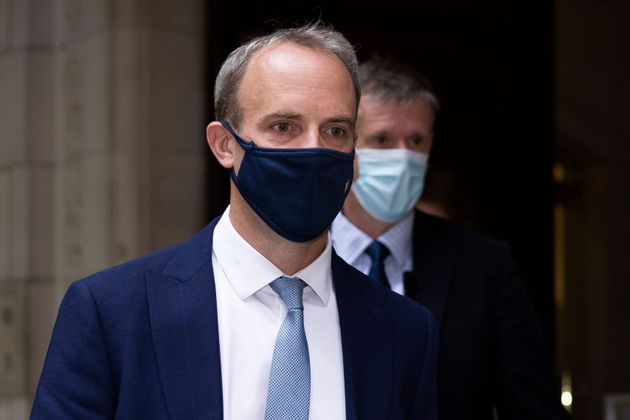 Dominic Raab should resign as foreign secretary or be sacked, Labour has demanded.

The senior Conservative minister is under pressure for not interrupting his holiday to make a call to help translators flee Afghanistan.

According to the Daily Mail, Raab was “unavailable” when officials in his department suggested he “urgently” call Afghan foreign minister Hanif Atmar on Friday – two days before the Taliban marched on Kabul – in order to arrange help for those who supported British troops.

Lisa Nandy, Labour’s shadow foreign secretary, said on Thursday morning that Raab should lose his job over the row.

“How can Boris Johnson allow the foreign secretary to continue in his role after yet another catastrophic failure of judgement?” she said.

“If Dominic Raab doesn’t have the decency to resign, the prime minister must show a shred of leadership and sack him.”

Labour leader Keir Starmer, said: “Who wouldn’t make a phone call if they were told it could save somebody’s life?”

But defence secretary Ben Wallace argued the suggested phone call from Raab would not have made “any difference whatsoever” given the Afghan government was “melting away quicker than ice”.

“If he does not, the prime minister should finally show some leadership, and sack him,” she said.

“Right now, there are interpreters across Afghanistan who are surrounded by the Taliban and fearing the worst.

“All the foreign secretary had to do was leave the beach and pick up the phone. He did not.”

Raab was holidaying on the Greek island of Crete and said to be staying at the Amirandes Hotel.

The five-star venue describes itself as a “boutique resort” which is “styled after the sprawling palaces of the Minoan kings and Venetian nobles who once ruled Crete” and offers “the easy elegance of true European luxury”.