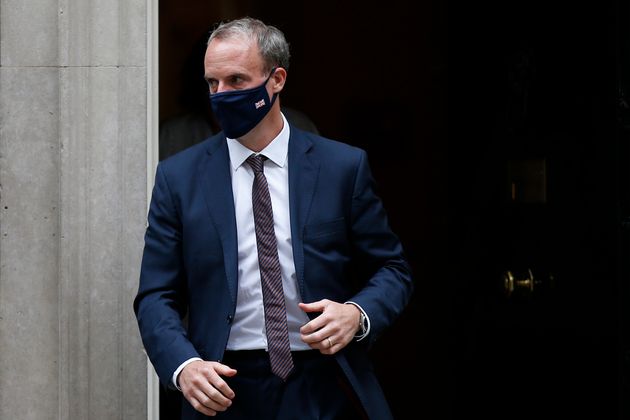 Dominic Raab said ‘everyone has been surprised by the scale and the pace at which the Taliban have taken over in Afghanistan’.

Foreign secretary Dominic Raab has broken his silence on the Taliban’s capture of Afghanistan, saying it was the “new reality” the west had to deal with.

Raab, who returned from holiday over the weekend to see the crisis unfolding over the weekend, said: “It is not what we wanted, but we have to deal with the new reality.”

The foreign secretary came under heavy criticism for not issuing any statements on Afghanistan for a whole week while on holiday and as the Taliban captured city after city before finally taking Kabul on Sunday.

The fall of Kabul sparked chaotic scenes in the capital city, with thousands of Afghans descending on the airport in an attempt to escape the impending Taliban rule.

The chaos led to calls for Britain and other western nations to open their doors to Afghan refugees, with Labour leader Keir Starmer saying the UK had an obligation to help Afghans who assisted the UK during its 20-year mission.

Raab said the UK was a “big-hearted nation” but would not give a figure as to how many refugees it would accept.

“We are obviously a big-hearted nation, we’ve got the criteria for asylum, that’s set in law, we work with the UN on that,” he said.

“We’re working very carefully on what kind of further commitment we might make.”

Asked whether he could give a ballpark figure, he said: “Not at this point.”

The foreign secretary also did not rule out sanctions against Afghanistan if the Taliban did not uphold commitments surrounding human rights and preventing terrorism.

That could include holding back official development assistance until the UK sees evidence of reform, he said.

The US and UK withdrawal has sparked fierce criticism on both sides of the Atlantic for the disruption that has ensued, with some preparing it to the fall of Saigon in 1975.

Raab was accused of being “missing in action” while holidaying abroad as events unfolded in Kabul at a pace both the US and UK had not anticipated.

Defending his decision to go on holiday, Raab said: “Everyone was caught by surprise by the pace and the scale of the Taliban takeover.

“I think the important thing to understand is right the way through last week – and I arrived, was on a flight last night to get back – I’ve been directly in touch with my team, directing them, which has paid the dividends, you can see what we’ve delivered with 150 British nationals who are going to be arriving back in the UK tomorrow morning.

“I’ve been engaged in all the Cobra meetings. I’ve been engaged with our international partners, I talked to Foreign Minister Qureshi from Pakistan on Sunday, I’ll be speaking to (US Secretary of State) Tony Blinken later today.

“So, the reality is the modern business of being a foreign secretary, whether you’re away on travel, or the very occasional time you get to go away on leave, I can always be in direct control of what the Foreign Office is doing.”