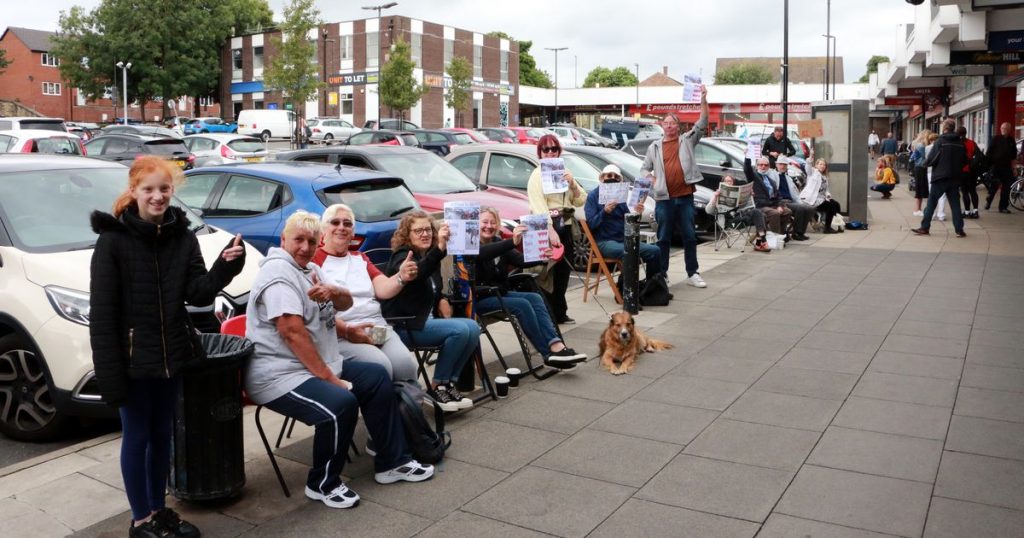 Bramley residents, the local MP and councillors joined together to stage a protest over the “strange” removal of 22 benches from the local shopping centre.

Over 60 people brought their deckchairs and waved placards outside the row of shops at Bramley Shopping Centre yesterday (Saturday) after 22 benches were suddenly removed by the new owners LCP Group, without consultation with the local community or council.

Campaigners have argued that the benches are integral to the local community and have provided them with a way to interact, as well providing a respite for the elderly and those with disabilities who need to rest after completing their errands.

LCP said they removed the benches in June because they were causing an “obstruction” and has since said that it will reinstall eight of the benches “by September”.

But that has not been enough to appease the locals in opposition, who say that eight is not enough and also argue the benches need to be placed around the shopping centre, rather than having four on each opposing corner, as has been proposed.

Local campaign group A Place To Sit has been set up and has helped organised the weekly hour-long sit ins, which have been taking place the past six weeks on Saturdays from 10am.

One of the campaigners, Fran Graham, said: “There’s not a lot to do around here and that’s why Bramley Shopping Centre is more than a shopping centre. It’s a social centre as well. And the benches weren’t just there to sit on, but for people to use as a means to socialise.

“A lot of people live alone and we have a larger than average older population and the benches help reduce social isolation.”

She added: “We were perplexed when the owners came in and ripped out 22 benches overnight.

“We have been trying to have a conversation with them ever since about why this happened but our emails have largely been ignored.

“They (LCP) said that they did a survey with the shops on the site but no one seems to have seen it. It’s very strange.

“The sit ins since have been really friendly. We have invited LCP to come and have a coffee with us and find out why we feel how we do.

“We want them to put all of the benches back. We are standing up for people who need to sit down at the shops.”

One of those who has lived in the area for decades and felt strongly about the removal of the benches is Jill Sowden, 73, who said the shopping centre is “a place people can go and have a wander and then sit and speak to a neighbour”.

Jill couldn’t attend the demonstration because of her arthritis, but had a picture of her taken so that she was there in spirit.

She said: “I used to walk to the shopping centre and have a rest and that was very useful. I think lots of people did that.

“There would be mothers with their children sitting to have their lunch or have a chat. It’s just so convenient.

“There’s a Post Office there and lots of elderly people go to pick up their pension. If there’s a queue then they would sit on the bench to wait.”

On LCP’s removal of the benches, Jill said: “It’s like they don’t really care.”

The local council has put forward a proposal to LCP to make a compromise and reinstall 16 benches and place them all the way around the shopping centre but have not yet received a response.

Discover more local issues in the street you live

Announcing the reinstallation of the eight benches, a spokesman for LCP said: “As we pointed out a few weeks ago, we were carrying out detailed on-site surveys before making any decisions as to the future-proofing and upgrading of the centre.

“I’m pleased to say that following our improvements to the parking provision, we will be installing new benches and aim to have them in situ by the end of September, subject to the shortages currently being experienced across the whole construction industry being resolved.

“As managing agents, we are working hard to make Bramley Shopping Centre more appealing and are actively attracting new occupiers.

“We’re looking forward to announcing new names in the next few weeks.”