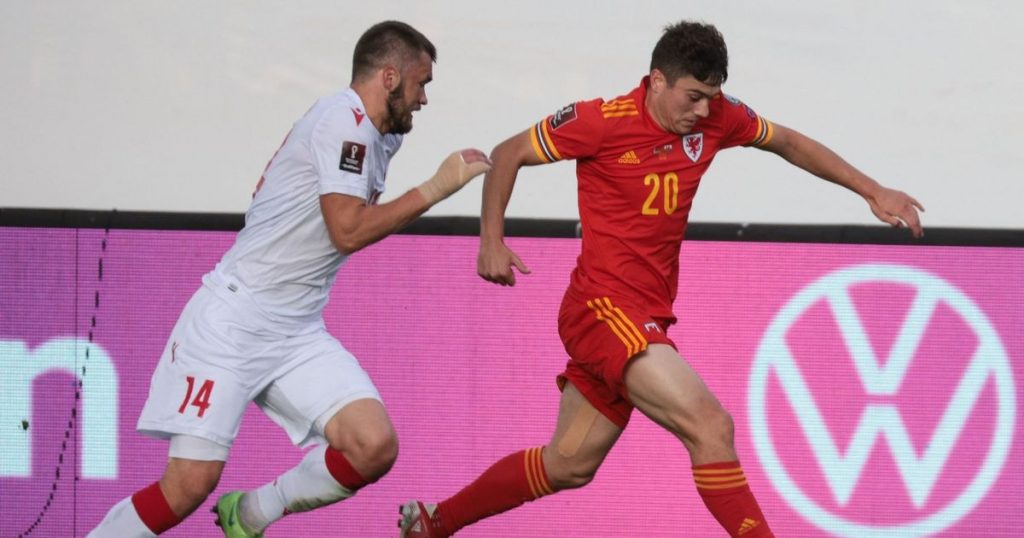 While the Leeds United support was engrossed with Patrick Bamford’s England debut on Sunday afternoon, 2,500 miles east in the Russian city of Kazan, Daniel James took to the field for Wales.

Leeds teammate Tyler Roberts had been unable to travel to Russia due to a visa issue but after missing a 0-0 draw with Finland earlier in the week, James was deemed fit to play the full 90 minutes against Belarus.

Aided by a Gareth Bale hat-trick, Wales defeated the Eastern European nation – who were unable to play in their capital city Minsk due to off-field problems – by three goals to two.

However, Rob Page’s side left it late to secure their third and most crucial goal of all, provided by none other than Leeds United’s newest recruit.

James received the ball inside the penalty area as the clock ticked down, threatening to call time on what would have been a wasted opportunity to gain a vital three points in qualification.

Instead of panicking under pressure, the 23-year-old found the room and had the presence of mind to pick out talisman Gareth Bale on the opposite side of the box, unmarked.

Bale applied the finish, and celebrated passionately, but the star of the show had been James – particularly in the first half at Kazan’s Central Stadium.

The game was played – in effect – behind closed doors, as Kazan is located some 800 kilometres from Belarus. Due to Russia’s entry restrictions, and the hastily-arranged venue, fans were not in attendance – a repeat of the eerie spectator-less pandemic-ball which has been gradually phased out over the past months.

With ten ball recoveries, seven dribble attempts, four successful tackles and three chances created, the winger showed Marcelo Bielsa he can count on him right from the off.

His return to club football will see him join up with the Leeds United squad for the first time, just days before the side face Liverpool at Elland Road.

There will be little opportunity to become acquainted with the intricacies of Bielsa’s system, or to gel with his new teammates, but the endeavour and repeated finding of space, linking of play and creation of chances – albeit against Belarus – did indicate James would fit right in.

Equally, a 90-minute run-out demonstrated James’ fitness levels – a performance Bielsa and his analysts will already have begun to assess.

James’ readiness could come at no better time, with uncertainty still looming over Raphinha’s availability against Liverpool.

The Brazilian was named in his country’s senior international squad for the very first time last month, but due to many South American countries’ status on the United Kingdom’s coronavirus red-list, has been prohibited from travelling.

Fellow countrymen Fred, Thiago Silva, Gabriel Jesus, Ederson, Alisson, Fabinho and Roberto Firmino have also been prevented from joining up with the Selecao.

Should Brazil’s footballing federation (CBF) launch a complaint against these Premier League clubs, FIFA may impose a five-day ban on those players representing their teams, which would rule Raphinha out of Liverpool’s visit.

Meanwhile, four Argentinian Premier League players have been accused of falsifying documents permitting them to enter Brazil ahead of a FIFA World Cup qualifier between the two countries.

Emi Martinez, Emi Buendia, Cristian Romero and Giovani Lo Celso have been asked to leave the country by Brazil’s health ministry, which could cause potential disruption to their respective clubs.

Leeds may view this situation as ample reasoning for denying Raphinha the chance to join up with the national team squad ahead of their final World Cup qualifier this month against Peru – which takes place just over 48 hours before the Liverpool fixture.

This may still incur FIFA’s wrath, but a five-day ban would certainly pose less of a disruption to Raphinha’s training and match preparation than a mandatory ten-day quarantine which he would be required to undergo on returning to the UK.