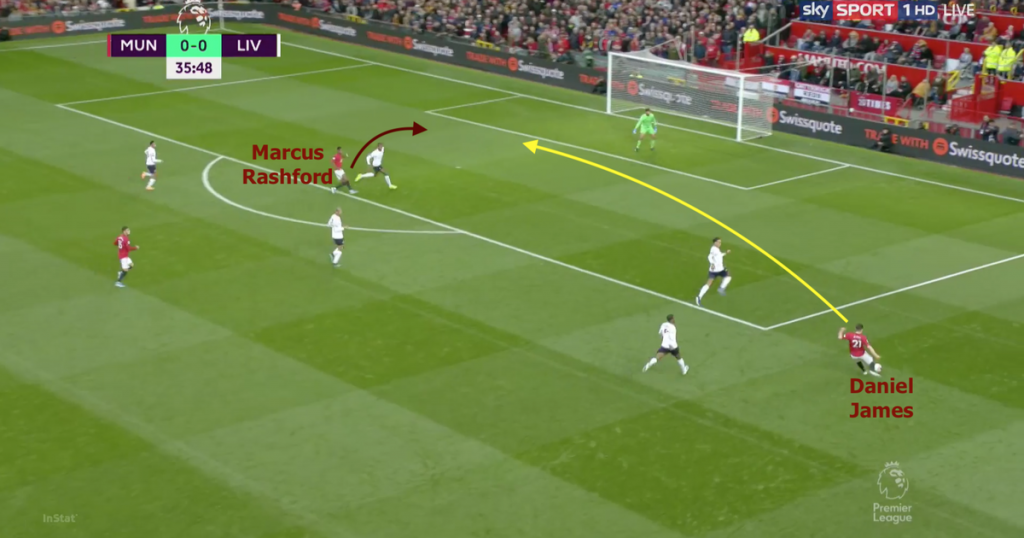 Daniel James may make his Leeds United debut this weekend at home to Liverpool.

The Welsh international will arrive at Thorp Arch this week having sealed his reported £25 million transfer seven days ago.

Sunday’s opponents are tricky customers, as anybody who has witnessed Jurgen Klopp’s innovation over the past six years can attest to.

However, on their last visit to Elland Road, the Reds left with just a point courtesy of a late Diego Llorente leveller for the hosts.

The uproar surrounding the European Super League dominated discussion last time around, but on this occasion it may well be the Whites’ newest face – should he be introduced at some point, or even from the start.

LeedsLive have delved back into the Premier League archives, to assess just how the 23-year-old could hurt Liverpool this weekend.

James notched an assist against Liverpool at the beginning of the 2019/20 campaign, a match in which Manchester United drew 1-1 with the champions-elect.

In this particular game, Manchester United utilised their speed on the counter-attack to generate the majority of their opportunities, while almost half of their attacks came down the right flank, according to WhoScored.com.

Comparably, only 15% of Man United’s attacks went through the middle, indicating the Red Devils purposefully relied on the width James could bring.

His assist for Marcus Rashford, was borne out of a fast break from Man United’s own half.

Scott McTominay seized on a loose touch from Divock Origi, which was the trigger for James to set off, already positioned behind Liverpool’s midfield line giving himself a clear advantage.

Given that Leeds look to turnover the ball high up the pitch, James’ ability to pivot immediately and dart towards the opposition’s goal is a particular threat.

At the end of that particular move, James was able to bend a well-weighted cross into Marcus Rashford who had taken advantage of the speed of the counter-attack to arc his run around the back of Joel Matip at the final moment.

Patrick Bamford is especially adept at altering the direction or angle of his run in the penalty area.

Interestingly, James’ starting position in the game was as a supporting forward, more central than Man United’s width would suggest.

This was in order to stretch Liverpool’s defenders, seen by Virgil van Dijk’s following of James all the way to the touchline.

Starting central before arcing his run out into the channels and wider areas meant James was more difficult to track. A player with his natural speed and athleticism is much more troublesome to pass across to a teammate in a zonal marking system.

There was another reason for James’ central starting position, though: to press Liverpool’s ball-playing defenders.

The Reds were up against a player who during 2020/21 averaged 22 pressures per 90 – which places James among the top 6% of wingers and attacking midfielders across Europe’s top five leagues in that particular metric.

James’ repeated harrying of Virgil van Dijk and Andy Robertson meant the duo were unable to complete as many long diagonal passes as they would have liked.

Notably, on James’ side of the pitch, Van Dijk and Robertson attempted 13 long passes, completing six.

On the other flank, Trent Alexander-Arnold attempted 13 alone, succeeding with five.

While Robertson ultimately provided a late assist for the visitors, he was tasked with more defending than he is typically used to.

The Scot attempted four tackles and two interceptions – no Liverpool player managed more of either.

James’ speed, alertness and directness is something Marcelo Bielsa could certainly exploit if he is required to make his debut against Liverpool.

While it has hurt Liverpool before, it must be stressed that James cannot be expected to be fully caught up with his new teammates for some time yet.

However, coupled with Patrick Bamford’s penalty box movement, Leeds’ tendency to burst forward after quick turnovers of possession and James’ individual attributes, he is an additional weapon in the Whites’ arsenal they could not call on just over a week ago.