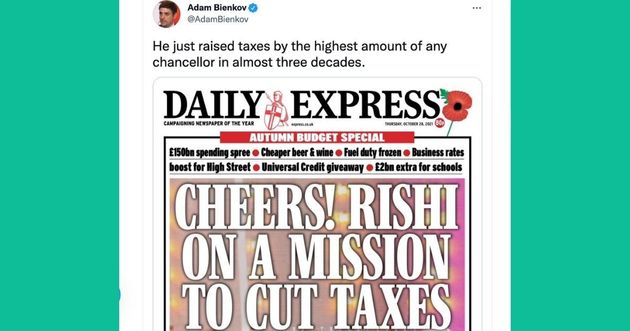 The Daily Express’ front page for October 28 was ridiculed

The Daily Express was bashed on social media after the newspaper declared that Rishi Sunak was “on a mission to cut taxes” – even though he actually hiked taxes up in his budget on Wednesday.

The chancellor did appear to promise in his speech to the Commons that he would cut taxes before the next general election in 2024, but his new budgetary announcements suggested otherwise.

As the OBR (office of budget responsibility) explained in its summary: “Taking his March and October budgets together, the chancellor has raised taxes by more this year than in any single year since Norman Lamont and Ken Clarke’s two 1993 budgets in the aftermath of black Wednesday.”

Sunak tried to pitch the reduction in universal credit taper rate – the amount recipients pay back to the government as they earn above a certain threshold – as a tax cut, but it is actually known as a benefit change.

Sunak did also announce big reductions for low-strength alcoholic drinks and a cut to air passenger duty for domestic flights.

Yet the main takeaway from his landmark budget is that the UK’s tax burden is now at its highest rate since 1950 – and that most of that burden falls on the self-employed and workers due to the hike in National Insurance contributions next April.

He also refused to say if income tax will be cut before the next election.

He told Sky News on Thursday “my ambition is to lower taxes for people”, even though his actually budget suggested otherwise.

It’s safe to say that the Daily Express’ front page for the day after the budget announcement, October 28, did not exactly land well.

Another person asked: “Does reality ever stand in the way of a Daily Express headline?”

Only Daily Express could carry a front page headline today

“Cheers! Rishi on a mission to cut taxes”

Given this year’s budgets have seen the biggest single year tax rise since 1993 and the overall tax take is the highest since 1950 I think Pravda-esque is justified for this one. pic.twitter.com/ii5Iet6PBe

This is not the first time the Express have missed the mark with its front page.

It faced intense backlash for putting Emma Raducanu’s US Tennis Open next to a story slating migrants coming to the UK only a few weeks ago.