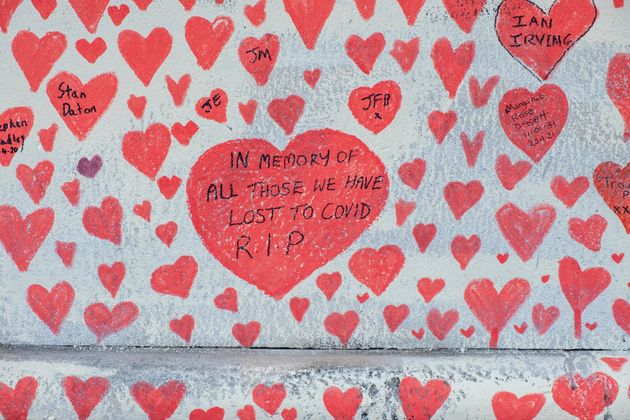 The national covid memorial wall, a sea of red love hearts remembering all those who have died due to the covid-19 pandemic. The number of people who have died within 28 days of a positive test now stands as 132,003.

The UK’s daily covid deaths have jumped by a third in a week, government data has shown, as experts warned of an uptick in cases as autumn approaches.

Data from the department for health and social care (DHSC) showed that 149 covid deaths were recorded in the past 24 hours, up from 111 last Wednesday.

Meanwhile, the number of Covid infections rose by 6%, with another 35,847 logged.

The rise in infections and deaths is mirrored by hospitalisations, which also increased to 859 admissions on 21 August, up from 779 the previous week.

The number of people who have died within 28 days of a positive test now stands as 132,003, while Office for National Statistics figures revealed there have been 156,000 deaths registered in the UK where covid-19 was mentioned on the death certificate.

The rising cases, hospitalisations and deaths come as one expert warned that the combination of music festivals and the return of schools would lead to a “significant surge” in infections, “despite best efforts”.

Professor Ravindra Gupta told the BBC on Wednesday: “Of course there is going to be an associated surge in cases, given that the young people in these events are largely going to be unvaccinated.

“That’s just something that is predictable and will happen, despite best efforts.

“We know that Delta [variant] is far more infectious, it ramps up very quickly. We know the lateral flow devices are not perfect. So we just have to be realistic and say that this is going to lead to a significant surge in infections.”

Gupta warned that although previous pilot entertainment events, including football matches and club nights, had not resulted in substantial outbreaks, this was likely because the delta variant of coronavirus was not dominant in the way it is now.

Festivals that have already taken place in the UK include Latitude festival at Henham Park, Suffolk, which took place last month. More than 1,000 people who attended have since tested positive for the virus.

Gupta’s comments come as another expert, Mike Tildesley of the Scientific Pandemic Influenza Group on Modelling (Spi-M) which advises the government,  said the true impact on covid hospital admissions of schools returning in the coming weeks would not be known until around the end of September.

“Probably what we will see is maybe middle of September we might see cases picking up a little bit and it may take a week or two or more for that to spill over into a rise in hospital admissions,” he told the Press Association.

“But to me the biggest unknown, and I think it’s very hard for any of us to call this now, is exactly how big that rise is going to be.

“I’m certainly optimistic that we hopefully shouldn’t get the same significant wave of hospital admissions that we saw last September but the key thing for me is how big is that going to be?”

On Wednesday there were warnings that even those who have been double-jabbed could see their immunity against covid-19 wane within six months of innoculation.

The Joint Committee on Vaccination and Immunisation (JCVI) is expected to make an announcement shortly on whether the UK will press ahead with an autumn booster campaign for 30million people over the age of 50 and the clinically vulnerable.

The Zoe Covid Study launched an app feature in December 2020 to log covid-19 vaccines and monitor real-world side-effects and effectiveness in its more than a million active users.

It found that the protection provided by two doses of the Pfizer/BioNTech and the Oxford/AstraZeneca coronavirus vaccines starts to wane within six months.

The Pfizer jab was 88% effective at preventing Covid-19 infection a month after the second dose. But after five to six months, the protection decreased to 74%, suggesting protection fell by 14% in four months.

With the AstraZeneca vaccine, there was a protection against infection of 77% one month after the second dose. After four to five months protection decreased to 67%.

The study drew on more than 1.2 million test results and participants.