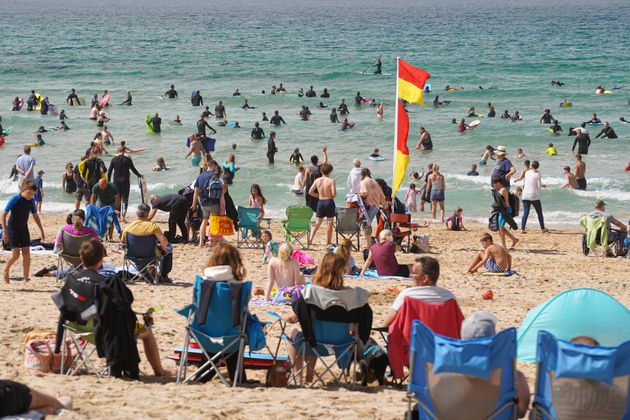 The Cornish tourist board has urged people not to visit the region unless they have pre-booked holidays amid a surge in coronavirus cases.

It comes as Cornwall and the Isles of Scilly now have the highest rate of Covid-19 cases in England and local politicians warn of a “perfect storm” caused by the surge in visitors.

Due to its small population, data for the Isles of Scilly is combined with Cornwall when presented at local authority level.

Rates have been calculated by the PA news agency from the latest data published by Public Health England.

Malcolm Bell, chief executive of Visit Cornwall, said visitors should aim to “treble their efforts as much as possible” with the hands, face, space guidance and try to remain outdoors.

Bell told the PA news agency: “We are asking people not to come unless they have booked ahead and request they take a lateral flow test before, during and after (their) stay so that (people) can be safe and help us to manage the current spike.”

On Monday, health officials said they were investigating 4,700 cases of coronavirus which are suspected to be linked to the Boardmasters festival, which took place nearly two weeks ago in Newquay.

The cases are spread across the country but around 800 are living in Cornwall, a council official confirmed.

Bell said: “There is concern and most local residents will be happier in a week or so, when the peak season is over and an older demographic visits as there are too many occurrences of overcrowding in honey pots.

“We are asking visitors to look at visiting other parts of Cornwall.

“We have over 300 beaches and lovely parts that can cope with visitors.”

He added that the vaccination programme in the county was in “full flow” and asked people due to arrive to be patient with businesses who are short staffed and to book ahead with activities.

Mayor of Newquay Louis Gardner, who is also the Conservative councillor for Newquay Central & Pentire and owns a deli in the town, said he has been speaking to other businesses this week and they believe the rise in cases is due to a number of different issues.

“We’re seeing a spike in Cornwall because we’ve got the highest number of visitors we’ve ever had,” he told the PA news agency.

“Our accommodation is at 100% capacity, our hospitality venues are full, there’s no social distance in place, but I think those factors all added in all together are having an effect.

A spokesperson for Boardmasters said the festival used the NHS Covid Pass app as a condition of entry to the festival or urged people to show proof of a negative test before entering and asked people to test themselves during the five-day event.

They added that more than 450 people tested positive and left the festival early or did not go in.

“No event is able to eliminate risk entirely and the latest Test & Trace data includes reported infections among the 76,000 people who visited the festival or related activities at Fistral Beach, in Newquay and the wider area during the week of Boardmasters,” they said.

“We will continue to work with our public health partners to understand the extent to which attendance at the festival has contributed to the figures.”