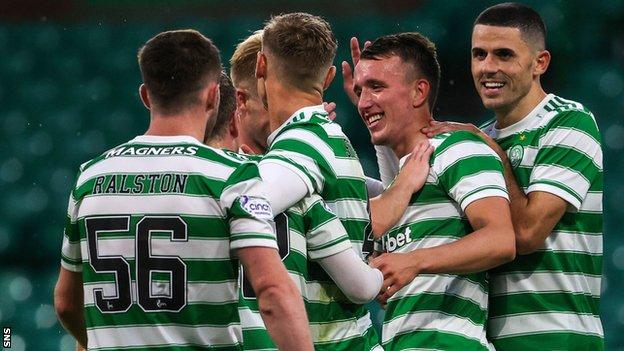 Celtic continued their recent resurgence as they strolled past the Czech Republic’s FK Jablonec in the third qualifying round of the Europa League at Celtic Park.

The dominant hosts were on top from the first whistle as David Turnbull soon scored his first goal of the season.

Another sublime finish from the midfielder made it 2-0, with James Forrest adding a deserved third.

Ange Postecoglou’s side will face AZ Alkmaar in the play-off.

After being knocked out of the Champions League qualifiers by Denmark’s Midtjylland, then losing their opening Scottish Premiership game of the season to Hearts, Celtic have now enjoyed three wins in a row with 13 goals scored as their season has been reignited.

The anticipation was high around Celtic Park with three stands packed to the rafters, and that energy fed on to the players.

Kyogo Furuhashi had scored three in the weekend trouncing of Dundee, and within 40 seconds he could have put Celtic ahead. Finding himself one-on-one with Jan Hanus he tried to dummy the goalkeeper, but the Czech got a foot in to deny him.

The Japanese forward soon had the ball in the net, but this time he was adjudged to be offside after slipping on to Forrest’s through ball.

The goal was coming, though. Stephen Welsh twice headed over and Turnbull had a powerful shot pushed away before Celtic finally broke the visitors’ resistance.

Greg Taylor slipped the ball into Turnbull who, with the outside of his right foot, poked it past the goalkeeper with a sumptuous finish.

Jablonec had half chances and a penalty claim when Carl Starfelt slid in on Dominik Plestil inside the box, but goalkeeper Joe Hart was having little to do.

And Turnbull finished the tie as a contest when he collected a pass from Callum McGregor, sized up the shot from outside the area, and hammered it inside the post.

It was cruise control for Celtic, but two chances in a minute from the visitors woke them up, Hart twice having to block close-range shots from Martin Dolezal and Milos Kratochvil.

However, soon it was three when Odsonne Edouard raced clear of the defence, attempted to lob Hanus who did well to get a hand to it, but Forrest was there to knock in the rebound.

At times Celtic took their foot off the gas and Hart was nearly punished when he was robbed off the ball after going for a run with it inside the box. Tomas Cvancara fired the loose ball at goal but the Celtic defence managed to get back to block.

Man of the match

What did we learn?

Postecoglou’s influence on the team is beginning to shine through, and again Celtic showed plenty of attacking invention.

At times the foot came off the gas and still defensively they can creak at times, but two great saves from Joe Hart will do his confidence the world of good and it’s a second welcome clean sheet in a row for Celtic.

What did they say?

Celtic manager Ange Postecoglou: “(the crowd) was brilliant, it was everything everyone said it would be to me. It was just really special.

“At the moment we’re asking a core group of payers – we don’t have a great deal of depth – to play a high energy type of game. Having the crowd behind them just gives them that little bit of extra energy they may need if they feel the tank is getting a bit empty.”

Celtic host Hearts on Sunday in the Scottish League Cup (15:00 BST) before facing AZ Alkmaar in the Europa League play-off round next week.