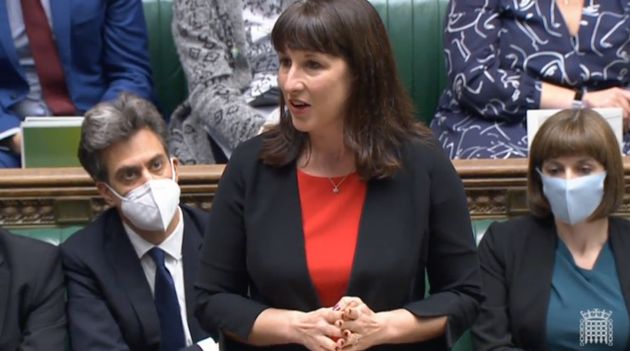 Rachel Reeves tore into bankers “sipping champagne” as she stepped in for Keir Starmer at the last minute to respond to today’s Budget.

The shadow chancellor hit out at the Conservative Party’s “waste, cronyism and vanity projects” as she was handed a huge moment on the political stage on Wednesday.

The senior Labour MP had to stand in for party leader Starmer after he tested positive for covid and was forced into self isolation.

Rachel Reeves told MPs: “The chancellor in this budget has decided to cut taxes for banks.

“So at least the bankers on short-haul flights sipping champagne will be cheering this budget today.”

The news that Starmer tested positive broke just moments before he was due to take part in prime minister’s questions.

During her budget response debut, Reeves accused Sunak of living in a “parallel universe” in the face of the cost-of-living crisis.

She claimed that never in the long history of the British parliament “has a chancellor asked the British people to pay so much for so little”.

She told the commons: “The highest sustained tax burden in peace time. And who is going to pay for it? It is not international giants like Amazon, no, the chancellor has found a tax deduction for them.

“It is not property speculators, they already pocketed a stamp duty cut and it is clearly not the banks, even though bankers bonuses are set to reach a record high this years.

Reeves said people were getting a “record” NHS waiting list with “no plan to clear it”, adding: “No way to see a GP and still having to sell their homes to pay for social care.

“Community policing nowhere to be seen, a court backlog leaving victims without justice and almost every rape going un-prosecuted.”

The Leeds West MP said working people were being asked to pay more for less because of “economic mismanagement, an unfair tax system, and wasteful spending”.

“Each of these problems is down to 11 years of Conservative failure,” she added.

Reeves said the answer was “growth” but claimed: “Under the Conservatives Britain has become a low growth economy”.

She also claimed that according to the growth experienced under Labour there would be more money for public services.

On covid, she said Britain suffered the “worst economic” hit of any major economy and on Brexit, she said British exporters were facing more barriers than their European competitors because of the deal the government struck.

Meanwhile, on tax, she said: “Taxes on those with the broadest shoulders, those who earn their income from stocks and shares and dividends and property portfolios, they’ve been left barely – untouched.”

She added: “We have a government that is a by-word for waste, cronyism and vanity projects.”

Reeves accused Sunak of asking workers to pay more while giving contracts to friends and donors of the Conservative Party, adding: “We’ve had £37 billion for a test and trace system that the spending watchdog says treats taxpayers like an ATM cash machine, a yacht for ministers, a fancy paint job for the prime minister’s plane, and a TV studio for Conservative Party broadcasts which seems to have morphed into the world’s most expensive home cinema.”