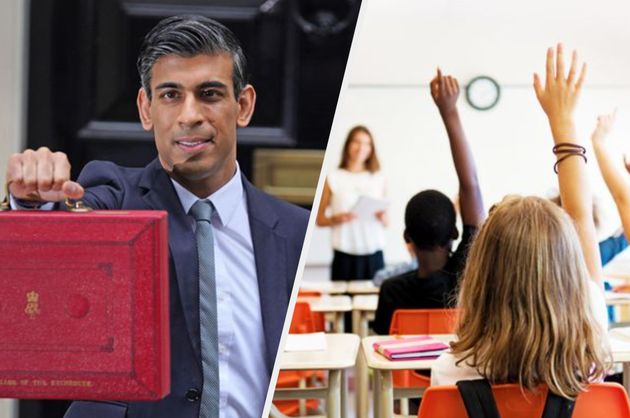 Rishi Sunak’s promise for an extra £2 billion to help school children catch-up after the pandemic has been described as a “pale imitation” of what is needed.

The chancellor said his budget boost would bring the government’s total support for education recovery to almost £5 billion.

However, the announcements have come under fire – with the catch-up just a fraction of the £15 billion recommended by the government’s former education recovery commissioner.

Sir Kevan Collins resigned in the summer in protest over a scaled-down recovery plan, warning it “does not come close” to meeting the needs of children whose education has been thrown into chaos by the pandemic.

Former education secretary Gavin Williamson reportedly submitted a bid for £7 billion of catch up funding before he was sacked after having had his initial bid for £9 billion of it turned down in June, according to Times Radio’s Tom Newton Dunn.

It means Williamson’s successor Nadhim Zahawi has received not even half that figure in today’s budget.

Labour’s shadow chancellor Rachel Reeves attacked the catch-up boost, saying: ”£2 billion announced today – a pale imitation of the £15 billion catch up fund that the prime minister’s own education tsar said was needed. No wonder that he resigned.”

Meanwhile, Paul Johnson, director of the Institute of Fiscal Studies, focused in on the chancellor’s promise to return spending to 2010 levels. He said it was “not much of a boast” and added: “A decade and a half without growth is quite a thing.”

Johnson told the BBC the increased spending was “hardly a bonanza”, adding: “To have no growth over 15 years in such an important part of public services is unprecedented, so it’s hardly a bonanza in the education system.”

Lib Dem leader Ed Davey said: “The chancellor gave more money to his banker mates than he did to our children and schools in catch-up funding.”

Dr Patrick Roach, from the NASUWT teachers’ union, said it did not provide schools with the money they need to meet the “acute demands” of pupils whose learning had been “seriously disrupted by the pandemic”.

Kevin Courtney, from the National Education Union, claimed Sunak was “still determined that education recovery will be done on the cheap”.

He said: “With just £2 billion added, the government’s plan for education recovery is completely inadequate.”

Meanwhile, Geoff Barton from the Association of School and College Leaders said they feared the budget falls a “long way short” of what was needed for education.

He added: “We hear the chancellor’s claim that the investment in schools will restore per pupil funding to 2010 levels.

“Even in the best-case analysis this still represents no growth in school funding for 15 years, and this commitment does not address the stark reality in 16-19 education where the learner rate is far too low.”

He said children had suffered the most educational disruption of any generation since the second world war and the government “must do better for them”.

5) Education – The Chancellor gave more to whiskey price cuts than catch up funding for our children. The Chancellor’s announcement leaves the government £9 billion short of the amount their education catch up Tzar resigned over. Our children deserve better than this. pic.twitter.com/mmRWfdlR5l

Sunak said his return to 2010 spending levels would mean a cash increase for every child of £1,500,

But the BBC pointed out it will not cover the nine per cent reduction in funding since 2009 – the biggest cut in 40 years.

Sunak told the commons: “Combined with the ambitious plans we announced at the spending review 2019, this will restore per pupil funding to 2010 levels in real terms – equivalent to a cash increase for every pupil of more than £1,500.

“And for children with special educational needs and disabilities we’re more than tripling the amount we invest to create 30,000 new school places.”

“Today, as promised by the prime minister and education secretary, we will go further – with just under £2 billion of new funding to help schools and colleges – bringing this government’s total support for education recovery to almost £5 billion.”