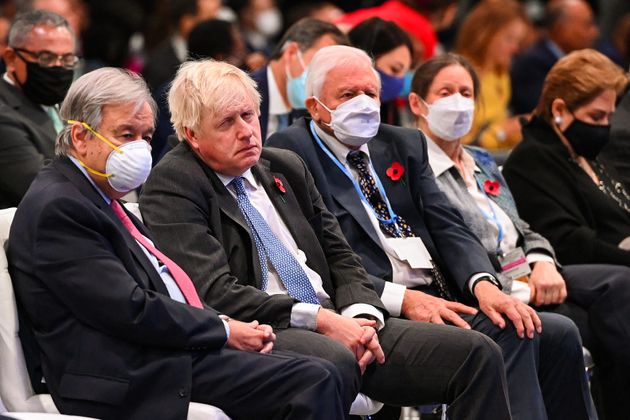 Boris Johnson has responded to criticism for not wearing a mask when sitting next to 95-year-old Sir David Attenborough at the Cop26 climate summit.

On Monday, photographs emerged of the PM appearing to be asleep (a claim denied by Downing Street) while neighbouring a masked-up Sir David on the first day of the crunch event.

The environmentalist is widely considered one of the country’s leading voices on tackling climate change.

In his first interview since the pictures caused a stir on social media, Christiane Amanpour of US broadcaster CNN questioned the premier on why he wasn’t wearing a mask while close to a “national treasure”.

“Do you want to answer what’s going on around social media?,” she said.

“That’s the approach we take.”

On Monday, palliative care doctor Rachel Clarke tweeted of the picture: “When you’re sitting next to 95-year-old Sir David Attenborough and you *still* can’t be arsed to wear a mask. Or even stay awake.”

Johnson has stirred up controversy by not wearing a face covering in various crowded settings in recent months, including in the Commons and in small rooms with his ministers. He has repeatedly refused to make masks mandatory as well, despite climbing Covid figures.

Last month, senior Tory MP Jacob Rees-Mogg said Conservative MPs do not need to wear face masks in the Commons chamber because they know each other and have a “convivial fraternal spirit”.

A day earlier, Sajid Javid, the health secretary, said MPs should be “setting an example” for the public.